Democrats, Russians, and the American Voter 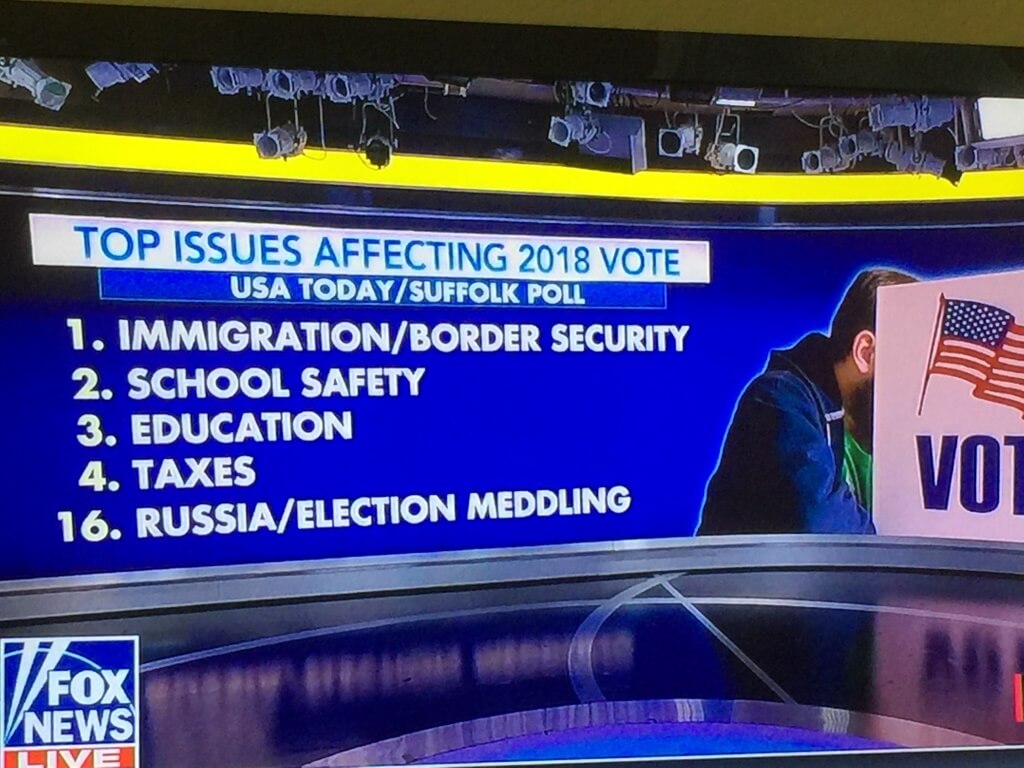 The constant bleating about “Russia, Russia, Russia” from the Democrats and their Liberal media flunkies amuses me. They think the supposed “collusion” between the Trump campaign and Russia will be a hot-button issue that will give them control of Congress in the mid-term elections. They’re so out of touch that they don’t understand that 90% of America (including most Democrats) just don’t care about it.

Regular Americans (not the political junkies) care about (1) illegal immigration, (2) school safety, (3) education, (4) taxes, plus eleven other subjects more than they care about “Russia, Russia, Russia.” On similar polls, Russia didn’t even make the top 20. And in a December 2017 Gallup poll less than 0.5 percent listed the “Situation with Russia” as their biggest issue, despite constant efforts by Democrats and the Liberal media to highlight it.

Did Russia interfere in the 2016 election? Yes. Did they do so to help Trump? Of course not. In fact, most of their interference occurred before Tump became the GOP nominee.

A little logic would be helpful here. If the Russians actually cared about who won, They would have supported Hillary, who could be expected to carry on Obama’s Socialist, soft-on-Russia policies. Trump’s stated policies of strengthening our military and making America first in our foreign policy decisions would scare the pants off Russia.

So what were they doing messing around in our elections? They wanted to cause confusion and fear. They wanted to undermine confidence in our electoral system. The Russians have been meddling in our elections for decades. They don’t have good TV programs over there, so maybe this is what they do for fun. But the fact is that their Facebook ads and other interfering supported positions of both sides.

As far as actually impacting the voting, they had far less impact than the Democrats. Democrats have stuffed ballot boxes, registered felons to vote and cast votes for dead people for the last 30 years. All of this has been proven, but there has been not one proven instance of the Russians changing a single vote.

Because our system gives each state the right to cast votes as they see fit, it is impossible to “hack” an American election. Wisely, there is no central point in the nation where votes are counted. And there is no universal system of voting. Some states use paper ballots; others voting cards where the voters punch next to their candidate; others are partially paper and partially electronic; still others are fully electronic. Also, within a state there can be many voting systems.

As the precincts count their votes, they are reported to the state’s voting commission. Once all legal requirements are met, the Secretary of State reports the results. There is virtually no way that an outside force can falsify the results of any election that is done using so many different methods.

However, elections can be tampered with from within. And, as I mentioned, Democrats have done so for decades. In Democrat counties where the election officials are all Democrats, many illegal acts take place. Here in my own county of Palm Beach, Florida, Democrat precinct captains kept the ballot boxes from primarily Republican polling locations in the trunks of their cars in violation of state law as insurance. If the vote had been close or a tie, those boxes would have been lost forever. But when the counting showed the Democrats winning, the boxes mysteriously appeared.

I hope the Democrats keep their heads in the sound and keep shouting “Russia, Russia, Russia.” Because while they do so, voters (including many Democrats) will vote based on the real issues. And the GOP will stay in control of Congress.