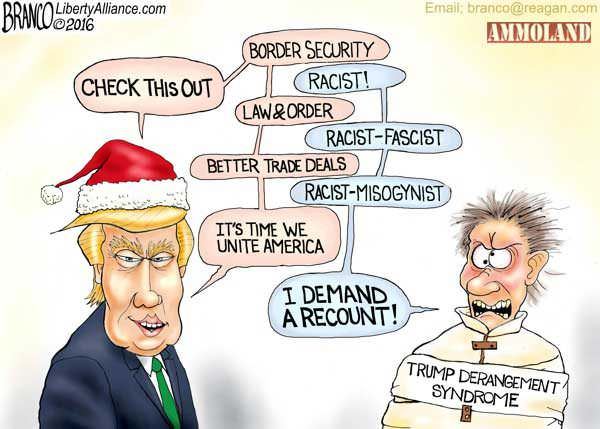 Fake news and fake prosecution are propaganda and persecution.  Witch-hunting leftists believe they can charge the President of the United States with Obstruction of Justice for using his presidential authority performing his presidential duties.  If that were true then Obama would be in prison for his persecution of Christians and conservatives of the TEA Party along with his crushing America’s economy by executive fiat.  People were dumb enough to elect a foreign raised Moslem to be the leader of America and paid the price for their foolishness.  Liberals literally live the definition of insanity.  It’s no wonder when they suffer from a derangement syndrome when it comes to Christian conservatism.  They slander and smear every conservative in the most heinous of ways deluding themselves that they are doing what is right.  NBC just threw a red herring to liberal boobs on Friday and caused the Stock Market to tank over fake news of Gen. Flynn admitting to Russian collusion with Trump.  This turned out to be nothing more than standard transition team initiatives.  In addition, leftists blame Trumpism for their own people being caught in the net they set for Republicans and exposed them as the sexual predators waging their secret war on women.  The web of liberal Democrat socialist lies is unravelling and they are becoming more obviously psychotic from one week to the next.

Karma is a bitch and Democrats, like the typical liberals they are when they get exposed, are blaming Trump!  What’s epically hysterical about this is that they thought they found a winning formula on which to witch hunt and burn at the stake conservatives, i.e. accusations of Russian collusion and sexual immorality, and instead are themselves being caught in their own net reporting fake news and outing themselves as the party of sex perverts and predators.  As NBC reports a supposed link to their Russian collusion their fairy tale blows up in their faces.  They think Trump is getting away with misogyny while they are being caught with their pants down.  What they will never understand or admit is that they are guilty of actually doing what they accuse Trump of when all he did was talk about it.  Talking about it is not the same as actually doing it.  Otherwise everyone on the planet would be in prison for murder!  Democrats, who believe themselves to be without sin, believe they have the right to condemn Republicans for their sins.

“Let he who is without sin cast the first stone.” – Jesus Christ

Liberals are imploding as they go down in flames and the deceivers of the drive-bys are trying to blame Trump as if his immorality is the cause of this uprising against liberal’s immorality.  Interpretation: Liberals in total meltdown

They deliberately sat on the Access Hollywood tape since 2005 holding it in reserve until they could use it against Trump at what they deemed the most damaging moment in his life.  That tape that was supposed to reveal him as a womanizing rapist that Republicans would reject was the greatest lie that fell flat on its face in the public forum.  While attempting to color him black they sat on every story of sexual predation by their side until it became impossible for them to hide the fact that Anthony Weiner was a piker next to their icons.  They knew about the likes of Franken, Weinstein, and Lauer and lied about it for years!  They thought they could continually get away with it as they did with Ted Kennedy and Bill Clinton.  Liberals lament that they have not taken down Trump with any of their schemes to assassinate his character or convict him of fraudulent crimes.  They have convinced themselves that means Republicans have become the party of immorality.  Their twisted logic and warped world view has led them to believe they are pure and perfect when they are the party that, at their best, starts out in the gutter.  These lies have worked in the past to torpedo Republican campaigns like Herman Cain’s, not because of any truth, but because they are hurtful lies, and men like McCain didn’t have the strength to put their families through that hell.  This has always led Republicans to believe they must present a flawless character to avoid being smeared by the media, but Trump has proved that as false as the accusations that leftists hurl without regard to facts, morality, or truth.  Donald Trump is a man who does not shrink from a fight, and he knows how to fight back when the fighting gets dirty.  He’s willing to wrestle in the mud and gob-smack liberals who are mud-slinging at him, and that is what makes him a great president for this day and age of leftist propaganda hate-mongering.

Why Donald Trump Survives and Thrives

The most enjoyable part is that liberals believe they are suffering a backlash of rightwing moral hypocrisy because they outed Trump when they are actually suffering a backlash of their own lies and sexual predation.  Just like their ads depicting Republicans throwing granny over the cliff on healthcare, when it was revealed that it was ObamaCare that had built in death panels for the aged, this too is rebounding into their faces.  Only some of the people can be fooled all the time.  The poor liberal fools crowed when it was revealed Gen. Flynn talked to the Russians at Trump’s request, but that is expected after a candidate wins the presidential campaign as he talks to all the important world leaders.  They didn’t complain when Obama talked to America’s mortal enemy the Muslim Brotherhood whom he aided in overthrowing secular to leaders to launch the Islamic State in their campaign to re-establish the Caliphate.

The world’s leftist leaders, that the countries of Europe and America have foolishly followed, are importing Islamic totalitarian socialism into their countries in the hopes on forcing the conversion of the West into Middle Eastern toilets beneath the boot of Islamo-Nazism.  Socialist atheists have come to realize the truth behind Marx’s words that making a brainwashed religious cult worshipping the state the opiate of the peasants will put them under their control.  Liberal Democrat ideology is the dogma of two-facedness.  They laud America haters Hillary Clinton, Michelle Obama, and Elizabeth Warren, while smearing gentle souls like Melania Trump.  The leftist media gushed over Moochelle’s Christmas hypocrisy along with her Moslem husband, while they desecrate Melania’s faith along with Donald Trump’s.  The atheist/Islamic alliance against Christianity is evidenced by the mutual hatred of leftist philosophy.  It is proof that Christianity is about loving God, while atheism is about hating God, and they ally with Islam because Muhammadism is about accepting Satan as god.  How is this evident?  By the words and teachings of Jesus and Muhammad;

Jesus said, “Forgive them for they know not what they do.”

Muhammad said, “Kill the unbeliever who will not submit to Allah.”

Liberalism is the heart of soul of self-righteous hypocrisy and this purge of the ranks of their media monkeys is proof of it when their sexual perverts and predators in the halls of power like Franken and Conyers refuse to step down.  Yet they think they can shame Republicans into discarding Trump.  All they are doing is proving they are the ones who should be dispatched forthwith and forever.  These are the people whom President Trump is stumping day after day.  They want to convince us that he is mentally unstable, while all along we see that it is they who are deranged, it is they who are petty, jealous, and hateful, and it is they who are warped and twisted.  They are so livid with furious anger that they are frothing at the mouth in rabid rage lashing out against Trump in irrational impotence.  Trump proves on a daily basis that he is not only in control, but in command, and he plays the media like a Stradivarius.