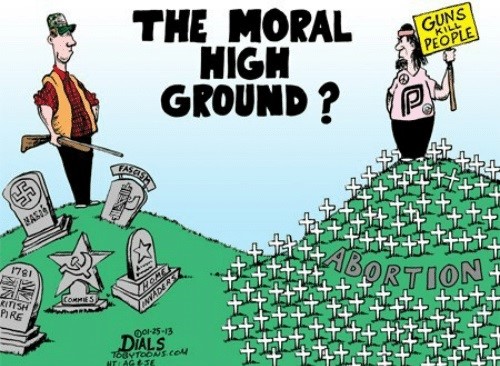 Democrats stealing the moral high ground is like stolen valor.  Stolen valor is when a pretender tells strangers he is a war veteran.  People like Sen. Blumenthal (D-CT) and Nathan Phillips falsely claim to be Vietnam veterans when neither was ever deployed overseas.  Both have also falsely accused Republicans and teenagers of being racists.  This is a microcosm of the entire Democrat Party and their declaration that they are the righteous.  They steal moral authority by damning all conservative Christians as demonic.

Their self-righteous hypocrisy not only leaves them exposed as entirely two-faced but fuels their campaign to destroy the righteous.  They have convinced young minds full of mush that the world is going to end in a few years.  Chiquita Khrushchev is so invested in Democrat fictional dogma that she grilled a Western Union Bank CEO about “why do you finance companies that cage children?”  This kind of stupidity is explained by what she believes to be intelligent moral thought;

AOC – “I think that there’s a lot of people more concerned with being precisely and factually and semantically correct than about being morally right.”

i.e. If you don’t agree with AOC’s false facts in broken sentences then you are immoral.

“There is no such thing as an ‘illegal human.’” – Kirsten Gillibrand (D-NY)

Nobody says that, you stupid cow!  There are such things as humans who commit illegal acts that are called crimes such as sneaking into the country to dodge identification, taxes, and medical exams, making them criminals.

Gillibrand will give Social Security away to illegal aliens

Global Warming pollution is racist: “While the air pollution the U.S. has gotten cleaner in the past decade, pollution inequity has remained high. The air that Americans breathe is not equal. Blacks and Hispanics disproportionately breathe air that’s been polluted by non-Hispanic whites, according to a study. This new research quantifies for the first time the racial gap between who causes air pollution and who breathes it. These findings confirm what most grassroots environmental justice leaders have known for decades, ‘whites are dumping their pollution on poor people and people of color…’” – Texas Southern University Public Affairs Prof. Robert Bullard

This is the kind of insanity and public stupidity that Democrats view as “moral.”  The leftists of the Democrat Party say they hold the high moral ground over Republican conservative Christians.  How can this be when the Democrat Party is morally bankrupt?  They openly endorse post-birth abortions, aka infanticide, aka infant sacrifice, aka murdering babies.  They openly endorse subsidizes illegal aliens invading the country, taking money, and stealing voting right away from citizen taxpayers.  They openly endorse atheism and Islamism against Christianity and Judaism.  (If you think that Christianity and Judaism are contrary then you forget that Jesus is a Jew.)  They openly endorse racism, fascism, and climate change indoctrination scams while declaring themselves to be unbigoted, tolerant, and educational.  So how do they so blatantly declare themselves to be morally superior?  Easy.  They steal it.

READ THIS ENTIRE ARTICLE AT –