Democrats Have Been Going Crazy Since FDR 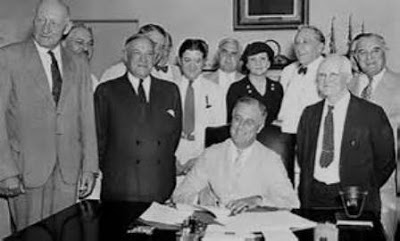 FDR Signing Social Security Bill – this was the greatest moment in the history of the Democratic Party and oft-remembered by millions of the party faithful, but an analysis of Social Security compared to required bank deposits or high quality equity funds reveal we were getting federally shafted even before Democrat LBJ put Social Security deposits into “General Revenues” thereby converting them to a tax such that liberal elected ruling class people believe SSI deposits are their money!

President Roosevelt was famous for another policy his political progenitors ignore. He said, “All government employees should realize that the process of collective bargaining, as usually understood, cannot be transplanted into public service. Particularly, I want to emphasize my conviction that militant tactics have no place in the function of an organization of government, such action looking toward the paralysis of government by those who have sworn to support it, is unthinkable and intolerable.” Franklin Delano Roosevelt August 16, 1937.

Thanks to JFK we have public employee unions that have bullied federal, state and local governments into compensation packages which are three times what said workers could get in the private sector. Their success spread to public schools with disastrous results on teacher quality as the bad ones can no longer be fired. Public education is a calamity. The record clearly shows the most revered Democrat in history, FDR, would have been totally opposed to what is now happening to his party.

I saw my father break down and cry two times in my 20 years with him: When my sister died and when FDR died. He was a life-long Democrat, graduated high school in 1931 and applauded all the FDR social programs, but would be shocked over what has transpired since he died in 1999. I do not know if he was upset with Bill Clinton, but more likely refused to believe it. We could not discuss politics after I turned conservative in the 80’s, having been a JFK Democrat for 26 years.

My conversion came as a result of making the filmstrip series, “Let’s Vote” for MCA Universal Education and Visual Arts in 1972. I got into three Democrat campaigns as a photographer and they always think you do not have a brain if you have a camera, or any tool, in hand. It took a while, but I broke out in the 80’s.

I was shocked to see how arrogant and disingenuous politicians and their top people were. Their attitudes distilled to, “How can we fool them today?” Now I am sure the Republicans have not been much better, but hopefully Mr. Trump will “flush the toilet” Washington, DC has become.

Now the Obama Administration claims to have known of Russian “hacking” DNC activities last summer, but he did nothing about it. Why should that be? Or, is it simply not true? Julian Assange of Wikileaks declares his source of the Podesta emails came from within the Clinton campaign and not from Russia. The only one of the “17 agencies” claimed to have made a statement of “hacking” is the CIA, however…

One group of younger CIA analysts, thought to be politicized, claim they know Russian hackers got into the DNC network. The older men in the bureau do not agree. It is thought the younger people are making a political statement, but not reporting evidence as they have offered none. The CIA is not law a enforcement agency. It is an information gathering and analytical service.

What in the world could have been in the John Podesta emails that would cause Hillary to lose the election? Higher taxes on personal income and business, new taxes on carbon, soda pop and guns? Her anti-rich people “Fairness” tax? Higher capital gains, a new equities transaction tax, a new “exit tax” for rich people fleeing America on her election?

“A US official familiar with the election-related hacking told CNN Thursday that the operation was carried out with sophisticated hacking tools, suggesting that Putin was involved.” That is logic we do not understand, nor do we think anyone could.

Democrat sympathetic press say while Putin’s “fingerprints” were not on the hacking, “the nature of the operation was such that this had to be approved by top levels of the Russian government.”

In the time of FDR we had a common enemy with the USSR, Adolph Hitler. In spite of Josef Stalin being a notoriously brutal killer of his own people we allied with him and were in his debt for having taken a big piece of the Vermacht in World War II.

Today we have an enemy in common with Russia, Islam, the terrorists of which have operated in Russia more than they have in the United States. Our public is not aware of it as Russian news is controlled, but be sure, they would welcome and be of great aid to us in our dealings with the terrorists we believe are in every state just waiting for the signal to launch World War III, the battlefields of which will be our “Gun Free Zones,” schools where guns are not allowed, churches, theaters, nightclubs and all such “soft” targets.

The Democratic Party is destroying what could be an effective ally in our war defending ourselves from the world domination well outlined in the Qur’an with the silly idea they would rather have had a quirky, alpha male with a short fuse and 7700 nuclear weapons instead of a unwell, nervous female who only thinks of personal enrichment who let them acquire the Crimea and sink deep hooks into the Ukraine.

It is not to difficult to see why Russia wants these two territories as the first gives them a warm water port they need and the second is capable of supplying 60% of their grain needs. As the great philosopher Forrest Gump said, “Stupid is as stupid does.” Democrats gone crazy.