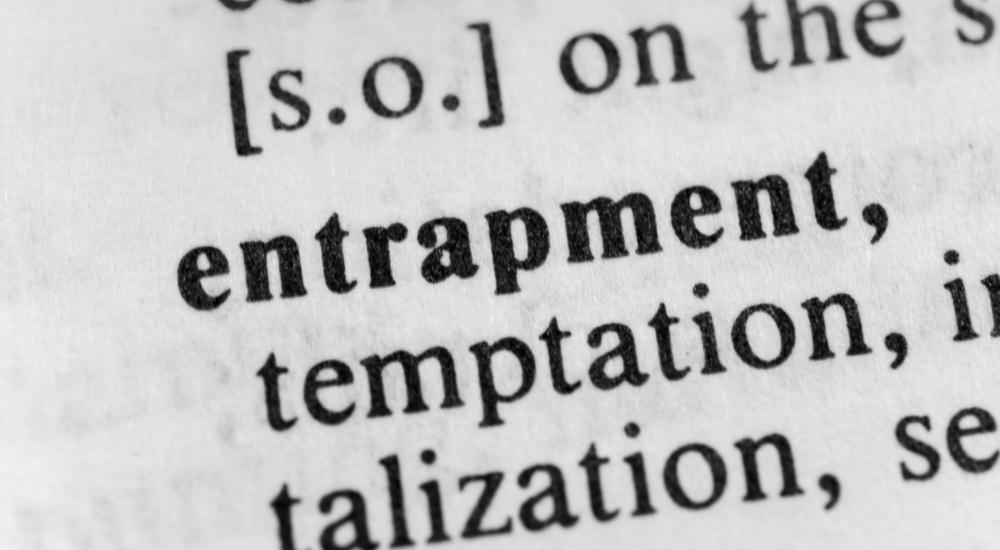 The Russian investigation has proven to be a fictional crime liberal Democrats invented to entrap President Trump and members of his administration in the crimes of cover-ups in order to manufacture an impeachable offense.

Obstruction of Justice does not mean what liberals believe it means.  They are accusing President Trump of obstructing the investigation into their invented Russian collusion voter crime and attempting to make that an offense by which he can be impeached.  Except that manufacturing a crime to cause someone to commit another crime is called Entrapment and it is completely illegal – a violation of the law by corrupt law enforcement.  You cannot obstruct an investigation into a crime that does not exist.

the action of tricking someone into committing a crime in order to secure their prosecution.”

FBI Director Comey admitted that in the war between Donald Trump and the Democrat media the ONLY one telling the truth is President Trump!  Comey confirmed that Trump was never the subject of an investigation.  Had he admitted that he was then Barack Obama would be instantly stand convicted of spying on the next president.  So the entire leftist media campaign to condemn Trump and his people of somehow stealing the election with Russia’s assistance has just gone up in smoke.  The special prosecutor has no purpose in investigating a fiction and should be dismissed.  Leftists don’t care if he is there or not because he serves no purpose except to keep their manufactured lies alive in the minds of their deluded followers.  If he is kept on they will keep saying he will find evidence someday just as they keep saying CO2 will kill the planet someday, and fools will believe them.  If he is dismissed they will cry obstruction of justice and whine like babies.  But it is better they be spanked and put in the corner than be appeased.  Yielding to the demands of the Left is how corruption takes root and grows in government.

Trump against the World

It is not only the responsibility, but the right of the President of the United States to speak with leaders and representatives of foreign powers just as it is his responsibility to ban whomever he perceives as a threat to the good citizens from entering the country.  But Democrats are obstructing the president from rightfully performing the rightful duties of his office.  The two-faced Left smear Trump as a racist and would have the nation damn him for speaking with the Russians when they applauded Obama working with the Russians.  They would have Americans condemn Trump from trying to aid our allies when they cheered Obama aiding our enemies.  Imagine how dispirited they are that their stories are being dismissed by the public, that their attempt to shape the narrative rather than report the news is transparent to the people.  Leftists invented a crime that doesn’t exist in the hopes of entrapping Trump in obstructing the investigation and convict him in the court of public opinion, and instead they are finding that Trump is exposing their lies and shining the light of truth on the Democrat Left’s anti-American hateful agenda.

Through words (tweets) and deeds, President Trump is navigating the minefield of Washington politicians and proving to be as redoubtable as Ronaldus Magnus.  Washington has it out for Donald Trump, the outsider businessman who believes he can drain the swamp of corrupt Washington bureaucrats, and they are prepared to wage their war on the people by any means possible.  Obama and the Democrats planted a veritable minefield of insider spies, leakers, and obstructionists with their agenda to keep Trump from making America great again.  Trump is proving to be as strong a Christian leader as the great Ronald Reagan and patriotic Americans who love this country are paying attention!  In the last eight years Democrats have lost the presidency, the Senate, the House, governorships, and state legislatures to the tune of over 1200 seats.  They hold only five states and are seeing their power stripped away from them by the American people whom they hate.  Their ploy of importing illegals and Moslems to supplant the white working voter is failing.  Their bastions of voter fraud in New York, California, and Illinois are besieged by the rest of the righteous nation.  God help President Trump and his people to continue tearing down the communist leftists who would fundamentally transform this great nation into their socialist banana republic and restore America to the greatness that our forefathers built.