Democrats Declare in One Voice – “I am Stupidus!” 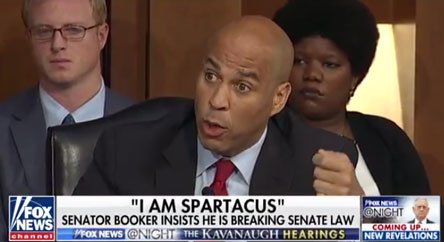 Democrat Senator Cory Booker, 2020 presidential wannabe, declared that he was going to reveal classified senate documents at the Kavanaugh hearing and put his senate seat at risk.  He said this would be the closest he would ever come to an “I am Spartacus” moment.  Except that those documents had been declassified that morning, and the rebelling slaves who declared themselves to be Spartacus did so to protect their leader, not aggrandize themselves.

Cory Booker’s “I am Spartacus” moment in the grand spotlight

America is in a Constitutional crisis because of Donald Trump.  Not because of anything he did, but because Democrats are attempting a coup to overthrow the rightfully elected president.  Booker’s grandstanding is what southerners describe as an overcooked ham.  No doubt this will be labelled racism by Democrats to whom I respond, “You can kiss my white ass!”  Booker wanted to use a document claiming Kavanaugh was a racist in which the man spoke against racism.  Democrats always deceive when campaigning.  They always sound like reasonable Republicans willing to work with the other party to make America better.  But when the rubber meets the road they always stand against Americanism and strive to advance global socialism.

Democrats always campaign as cooperative leaders, but always govern as dictatorial rulers.  If you thought the last campaign, where Democrats vied to replace a Republican in 2008 was far too long as Hillary and Obama vied for two years, this one will be even longer as the snakes have already started to shed their skins.  Like the liberal media, Democrats cannot tell the truth of who they are and what they represent.  Democrats trying to save their congressional jobs are campaigning in red states on their “love” of President Trump.  But, again, when the rubber meets the road they vote against him on every issue and fall in line behind their radical leftist leaders, Schumer and Pelosi, and adhere to Obamaism.

Liberal media proves they have s*** for brains

Just as Booker stupidly refers to Spartacus as if he is sacrificing something for himself, liberal media proves repeatedly and often that they don’t comprehend simple terms.  A prime example is the term “witch-hunt.”  When an anonymous source was published in the NYT claiming to be in the Trump White House saying that everyone in the administration believed Trump to be a mentally unstable fool, they described President Trump’s anger at this betrayal as a “witch-hunt” for the perpetrator.  No one knows if the perp is even in the White House, if he is low level, or even if he is just a Democrat slandering everyone.

Trump and conservatives have called the Mueller investigation a witch-hunt.  If liberals understood the definition of a witch-hunt then perhaps they wouldn’t throw it around so erratically.  The purpose of a witch-hunt is to persecute people, not to prosecute the guilty.  The writer of that op-ed, if working in the White House, is not being randomly singled out for persecution, but violated the office they hold and betrayed everyone in the administration.  Liberal media questioning all of Trump’s best people and accusing them of being the writer is just a distraction from the fact that this person committed the crime of libel.  Telling lies about others by representing oneself as a valid source in journalism is a felony just like committing perjury in court.

The same media that labels Trump’s search for the criminal says that his labelling Mueller’s investigation into his campaign supposedly working with Russians a witch-hunt is the unfounded accusation of a dictator.  Let’s examine what Mueller has done with his investigation.  He has convicted Gen. Flynn of lying to the FBI.  He has charged Paul Manafort with tax evasion from something in his records from twenty years ago that the IRS knew about.  He has indicted Russian advertisers for running ads against Hillary during the 2016 campaign.  None of the charges he has levied out have anything to do with the Trump team colluding or conspiring with Russian agents to somehow steal the election.  All of his charges are against people who are innocent, like Flynn whose FBI interrogators said he did not lie to them, and if not innocent then long past the statute of limitations.

Mueller is the one persecuting people.  His investigation stopped being about Russian collusion shortly after it began, and he began digging into the private lives of his subjects to find other crimes by which to convict them.  If he couldn’t find a crime, as in Flynn’s case, he manufactured one just as he tried to manufacture obstruction against Trump.  This is the definition of a witch-hunt.  In the Middle Ages, witch-hunts were conducted by Inquisitors torturing random people until they were forced to confess, and as everyone knows if you torment someone enough they will confess to anything.  This has been Mueller’s approach from start to finish.  He has no evidence to support any charge of Russian collusion or election interference by anyone that changed any votes.

Liberal media and their Democrat masters have proven they will lie, cheat, steal, and kill to obtain power.  They’ve been murdering police and even assassinated one of their own, President Kennedy, because he wasn’t communist enough for them.  Liberals believe that their stealing from the rich to give to the poor is “charity.”  When the word “stealing” is involved it’s not charity.  Taking from someone is not being charitable.  Socialism is stealing and only liberals lacking a moral compass don’t understand that.  Liberals are so stupid when it comes to understanding anything the only way to describe it is having sh*t for brains.

Liberal Democrats are so stupid they have it pouring out of their mouths.  These fools don’t even know the meaning of the words, phrases, and symbols they use.  When they label the “OK” hand sign as a sign meaning “White Power” you know they have lost it.  They used this fiction they created to smear and slander a woman sitting behind Kavanaugh at his hearing holding her arms crossed with her thumb and forefinger resting on her forearm.  It’s this kind of juvenile stupidity that makes liberalism the ideology of the ignorant bred on immorality.

Democrat’s entire anti-Trump campaign is founded in petty slanders, poisonous reporting, and distractions founded in deceptions all designed to keep the average liberal Democrat from learning the truth.  You will not hear in the mainstream leftwing media that Booker’s big “reveal” that “endangered his seat” was a pompous lie.  They will not state that the papers of which he spoke were already declassified.  That kind of news will only come out days after it is revealed on FOX News which speaks ten times more truth from both sides than leftwing media propagandists will ever state when it comes to reporting about the right.  America needs Republicans to be in charge – Republicans who stand with the President who is doing what Americans have been demanding of Republicans for decades.