Democrats are the Biggest Losers in Every Way 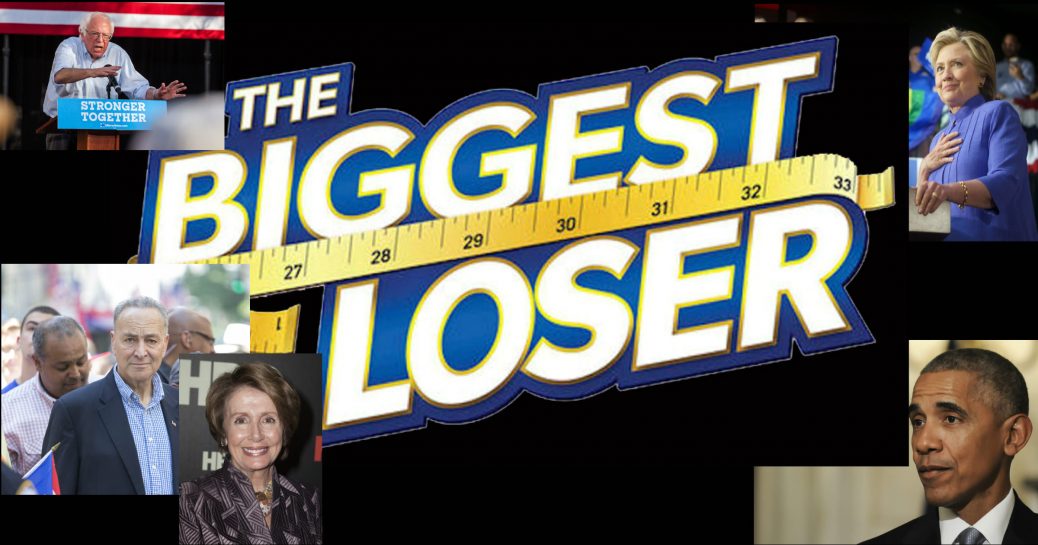 Liberalism was on the ballot this election with a ten year record behind it and Americans have said they want their country back!

The Great Experiment in liberalism led by Barack Hussein Obama is coming to an end barring a coup in some form by America’s Community Organizer-in-Chief.  As liberals go ballistic over the election of Trump, the people who should be calling for law and order – Obama and Hillary – are instead endorsing and urging their fanatic followers to ever greater acts of sedition.  Hillary and the Obama Democrats have lost every step of the way this election and for the last six years.  Since succumbing to media propaganda blaming Republicans for all their ills in 2006 and turning to Democrats, America has gone into severe decline as the Left has sought to transform the nation away from its founding to make it a socialist banana republic.  But they lost and they keep on losing.

In the years before this the Democrats have lost almost a thousand seats in government throughout the country.  Now they’ve suffered three more defeats each more stinging than the last.  First they lost on Election Day when they discovered that stuffing the ballot boxes in California and New York didn’t change the Electoral College.  Then they lost the recounts when it was discovered more votes were counted for Hillary than were cast.  Now they have lost in their effort to undermine the Electoral College with Hillary having more Electors desert her than Trump.  Now they want to impeach Trump before he is even inaugurated.  The pathological derangement of the Left is on full display along with their media propagandists as the Nazi regime in America.

The Left’s Favorite Words to Brainwash the Public

The MSM does not report the acts of these fascists who call Trump a fascist when Trump is the one acting maturely, responsibly, and righteously.  As Islamic terrorists kill more innocent people Obama says “boo-hoo for you” while Trump says “we must eradicate them from the face of the Earth!”  This is what Americans have been praying for expecting for the last eight years as Obama not only allowed terrorists to make successful attacks in America, but fueled the flames of the Jihad and invited Islamists to live among us and Europeans.  Trump and the new regimes will have none of this Islamic invasion of the West.

But liberals don’t want Trump to stop them and are crying, “This is my America!”  What is liberal America?

This is the America of liberals.  This is what they want and those of us who believe in freedom, morality, truth, justice, and the American way want no part of it!

So Sad!  Conservatives cause Satanic Leftarts to Lose Hope