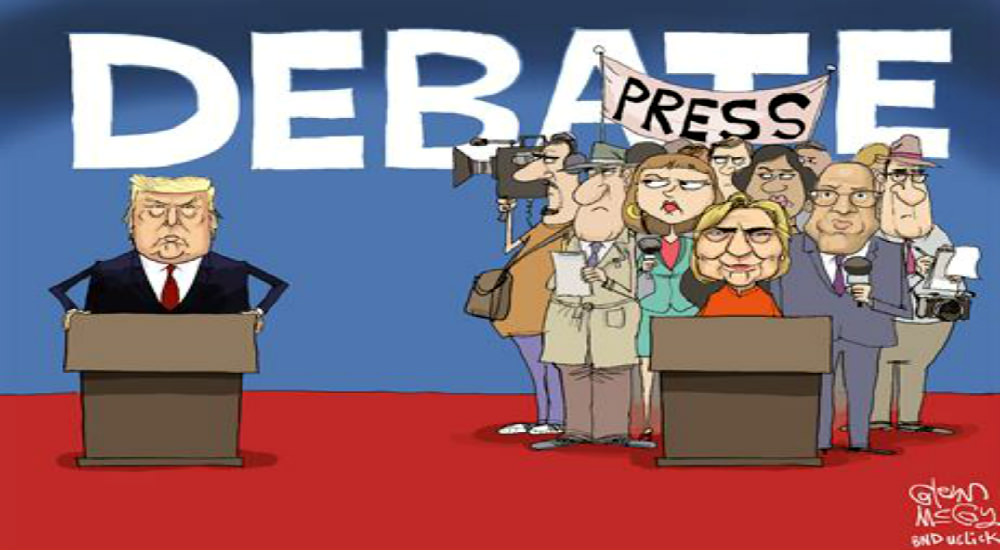 In truth there is no beauty, but in propaganda there is no truth.  Effective propaganda always uses superficial facts to mislead the ignorant in order to dissuade them from the truth.  Not every outlet that says they are fact checkers is legitimate.  Even those that are close you should take with a grain of salt.  Always investigate for yourself.

Liberal fact checkers are wolves in sheep’s clothing.  They twist Trump’s words, put words in his mouth, creatively edit what he says, and all the while provide cover for Hillary’s lies.  Liberal’s facts are different from actual facts.  They are always superficial at best, outright deception at worst.

Take socialism.  The 20th century is written in the blood of socialism in the forms of Communism, Fascism, Nazism, and Islamism.  Yet 21st century liberals teach that socialism is about justice, fairness, equality, and righteousness.  History is proof that Socialism = bloody Totalitarianism, not Utopia.

The problem with liberal fact checkers is that their facts are not accurate.  Some get it right, but others either get it wrong or they get wrong conclusions based on their false premises.  For example;

Liberals say Trump is a racist for objecting to illegal immigrants.  If Trump says he is not a racist the liberal fact checkers declare:

If Trump says he is not against immigration, but against people illegally entering the country they ignore his assertion to stand by their misrepresentation.  Hillary is doing the same with declarations that Trump will not accept the results of the election is “a direct threat to our democracy” as if the election results are guaranteed to be fair and have never been challenged by Democrats.

Trump will accept election results – if he wins!

The Republican voter platform is to stop illegal immigrants and Sharia Moslems from coming to America, but that is not the party platform which is what makes Republican leadership stupid.  When the GOP believes acting like Democrats will win them votes that is when they lose.  Then they are no longer the opposition party and may as well be running as Democrats.  Doing what Democrats say they should do is why Republicans lose.

Snopes gets it right

Trump supporters are being portrayed as violent extremists.  The truth came out in a Veritas investigation behind the scenes that the Hillary camp is conducting operations to incite violence and smear Trump and his supporters using techniques right out of Mein Kampf, the Hitler playbook on how to overthrow a rightful government.  Hillary wrote her thesis in college about Saul Alinsky’s “Rules for Radicals,” a book also about how to wrest power out of the hands of righteous people.

Clinton calls Trump a racist for wanting to build a wall to stop illegals from stealing over our borders and breaking into our home.  She calls him a fascist for wanting to stop Islamists that want to subvert the Constitution and institute Sharia through terrorism from coming to America.  Democrats are the Communists allying with the Islamo-nazi fascists to defeat America as the Russians and Germans did in WWII before the Nazis stabbed them in the back.  The Left is the home of socialism which is the mother of Communism, Nazism, Fascism, and Islamism.

More liberal “facts” that are false;

The American media contributes thirty times more money to Democrat campaigns than to Republicans, same as college professors that favor Democrats 20:1 over Republicans.  Why is it that the people who teach and inform Americans are so completely invested in the Democrats?  Is it because Democrats are truthful, help the poor, benefit the people?  No, it’s because Democrats buy them just as they buy scientists to promote the global warming fraud.  That’s why the media are a bunch of Democrat sycophants and why college tuition is so overblown – because Democrats funnel money to them from taxpayer funds.  Who is it claims Democrats are for the little guy?  Democrats take the wealth from the rich that would be used to expand businesses leaving the little guys without a job and dependent on the charity of the Democrat government that is making itself rich.

What liberalism has built (i.e. torn down)

Liberals believe many erroneous things that they have been told like CO2 will destroy all life.  Talk about science ignorance!  Plants require CO2 to live and are why we have an oxygen atmosphere and why animal life came to be.  More CO2 doesn’t make the earth hotter, it grows more plants.  But because liberals believe this scam they vote for government to shut down American energy to make the nation dependent on foreign sources for power.

Liberalism has changed America and how they changed this great nation is found in their new sayings like “America was never great.”  What the Left has done to the psyche of this nation is quoted in the movie “Interstellar” by Matthew McConaughey, a fairy tale about how the Earth is dying and man must find a new planet on which to live, something that many liberals are believing.

Because they believe they are “saving the Earth” from capitalism, America, and CO2, liberals are willing to go to any length to achieve victory over Americans.  Not that they ever needed that excuse to commit their crimes as Democrats have been committing voter fraud forever.  They may claim that “both sides do it,” but the incidence of conservatives doing so compared to liberals is insignificant.  The whole reason people become conservative is because they believe in morality, but occasional someone may fall back into their liberal roots.

Trump represents the first true chance for change by someone not of the Washington establishment taking the helm.  All Hillary will do is complete Obama’s destruction of America as founded and transform it into a socialist hell for the people.  Four years from now those people who voted Democrat will still be complaining about how bad things are and stupidly vote Democrat again like the insane people they are.

The greatest threat to American democracy are Democrats like Hillary Clinton and Barack Obama who have given away America nuclear power to her enemies, armed and funded those enemies, and weakened America’s military and economy.