Democrat Lies Lead to Riots in the Streets 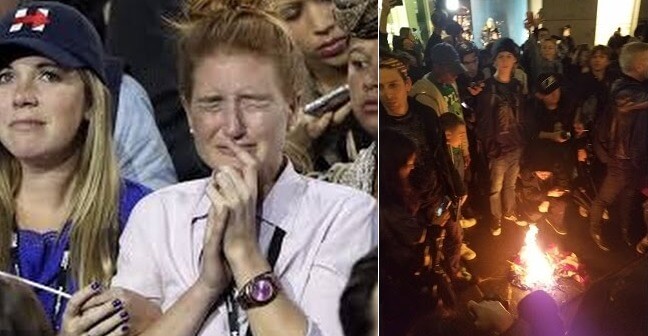 It’s sad to see all these desperate people crying and rioting over the election results when the reason they’re upset is because they believe the lies they’ve been told all their lives.

The Schools, the Press and the Entertainment media have brainwashed them to the point where they celebrate when something bad happens (like a weak, anti-American socialist becoming president) and throw a tantrum when their country may have just been saved.

They claim that the parties “switched” in the 1960s, but that’s another lie.  The only thing that switched was the tactics.  Democrats finally realized that it was political suicide to keep denying Blacks their rights, so they chose another tactic to keep them on the Plantation, namely Welfare – which keeps people in poverty instead of freeing them from it. After signing the Republican Civil Rights Acts into law, Democrat LBJ said “we’ll have those n—–s voting Democrat for 200 years.”

Another lie is that Republicans are anti-women.  The main issue here is Abortion.  We have been taught that anyone who opposes abortion is anti-women.  The life aspect of the issue is never allowed into the conversation.  Nobody is ever taught about the harmful effects abortion has on the standing of women in society: namely giving men an excuse for treating women like sex objects and shirking the man’s responsibility of caring for his children. (If you’re thinking ‘Bill Clinton’ right now, you’re on the right track.) This is both anti-woman and anti-family.

A third lie is that Republicans only care about the rich.  This lie is perpetuated by the lack of proper economic education in the schools.  Students are brainwashed into socialist thinking, rather than being educated.  “Tax breaks for the rich” is just another lie.  If we eliminated loopholes and went to a lower, flat rate, the rich would pay MORE in taxes.  But you can’t explain that to the brainwashed.

All the accusations: Racist, Sexist, Xenophobe, Islamophobe, Homophobe, Greedy, Violent, Stupid, etc. are all lies designed to scare people into voting for Democrats whose policies have made our economy weak, our borders insecure, our streets unsafe and our national security vulnerable.

It’s tempting to mock these angry and upset people as “snowflakes,” but we should pity them, and do what we can to educate them; to deprogram them from the brainwashing they have been subject to since the day they first set foot in Kindergarten.  Maybe then the healing can finally begin.