Democrat Joe Manchin: ‘I just don’t give a sh**’ about Being Reelected 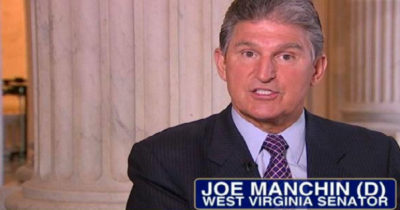 Senator Joe Manchin (D-WV) is a popular politician in West Virginia. He is often seen as a man who votes “independently” and thinks of his constituents before his party.

Sadly, it’s all a bunch of hooey. It’s based on false perceptions and good politicking from certain candidates.

Manchin has this down to a science.

Yes, he’s among the most “conservative” Democrats in the Senate, but that’s not saying much. His voting record is actually most similar to Elizabeth Warren (D-MA) and Bernie Sanders (D-VT). See, Manchin just happens to vote “better” on a few key issues, like guns, and he gets to pretend he’s as bipartisan as they come. But the reality is he’s just like most any other Senate Democrat.

Which is why when West Virginia’s Charleston Gazette-Mail asked their Senator about his Republican opponent explaining that Manchin will do whatever he needs to just to be reelected, Manchin reacted with such vigor and vitriol.

When asked if Morrisey’s request and related messaging attempting to tie him in with Democratic leadership affected his decision to not sign the letter, Manchin said he doesn’t care about the attacks and they don’t affect policy decisions.

“I’m not scared of an election, let’s put it that way. Elections do not bother me or scare me. I’m going to continue to do the same thing I’ve always done, extremely independent.”

Manchin continued, saying signing the letter could force him into a position where modest changes could not be made to potential legislation in exchange for signing on Republican senators’ votes.

“I want to be able to reach out to my friends on the other side and say, ‘Guys, you like anything here, can we do something different, any changes, what would make you comfortable to sign on?’” he said.

The simple truth is that Joe Manchin isn’t for West Virginia. Joe Manchin is all about himself, his political power, and his party.

West Virginia voters should do themselves a favor and send him into retirement in 2018.