Democrats from the Democrat National Committee to the last name on a California tombstone where 22 of 58 counties have more Democrat votes cast than registered voters in every election, but the county’s Registrar of Voters officers see no problems, are the same people who think we are at war with Russia and a Donald Trump phone call to Vladimer Putin is an impeachable offense.

It is amusing to see Democrats feign insults and twist “shit” into racism when Mr. Trump makes an in-artful statement regarding one of the English language’s most useful words.  Where they gasp and gesticulate the people agree the countries Mr. Trump calls “shitholes” are exactly that and they never, ever want to go to them.

Mr. Trump did not say the people were “shit.”  He was calling out the corrupt governments; not the people.  Nonetheless, the Democrats need to learn more about our language.  The language of the people and particularly “shit.”  It is our most useful word.

To wit:  It is shit.  Yes, shit is the most functional word in the English language. 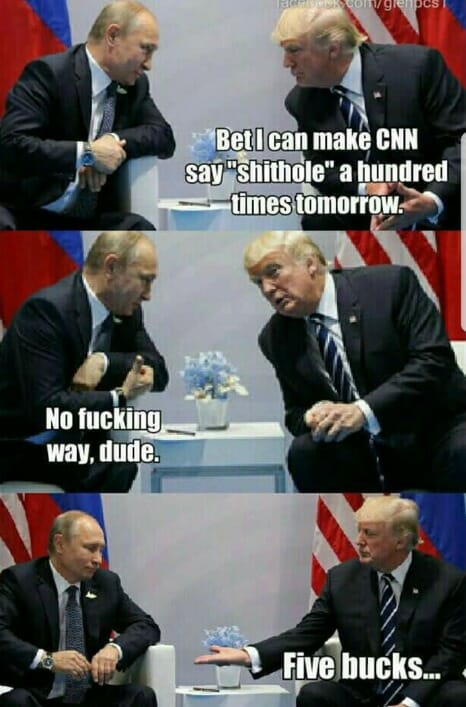 You can be shit faced,  shit out of luck or have shit for brains.

With some effort, you can get your shit together and find a place for your shit.  Or, decide to shit or get off the pot.  You can smoke shit,

Some people know their shit, while others can’t tell the difference between shit and shineola.  There are lucky shits, dumb shits, crazy shits and sweet shits.  There is bull shit, horse shit and chicken shit.
You can throw shit, sling shit, catch shit, shoot the shit or duck when shit hits the fan.

There are times when you feel like shit or you can have too much shit or not enough shit, or the right shit.  Even the wrong shit, or weird shit.  You can carry shit.  Have a mountain of shit, or find yourself up Shit Creek without a paddle.  Sometimes everything you touch turns to shit while other times you fall in a bucket of shit and come out smelling like a rose.

When you stop to consider all the facts, shit is the basic building block of creation. God know shit and never forget: once you know your shit, you don’t need to know anything else! And, you can pass this along if you give a shit, but it seems that Democrats don’t know shit even when they are full of shit.