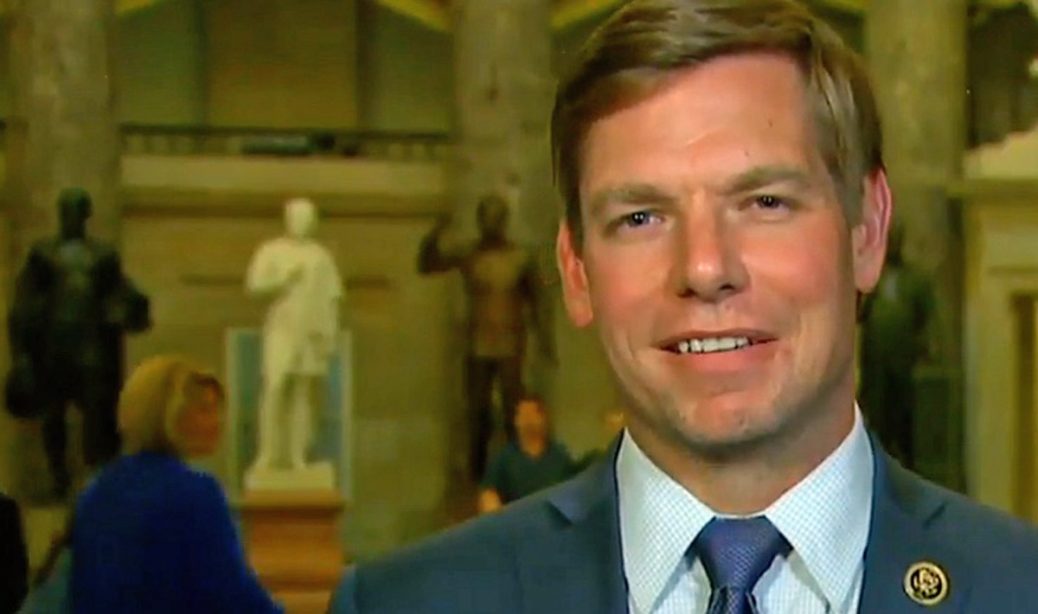 California Congressman Eric Swalwell is typical of Democrats who have no knowledge about America, its laws, its history or the U.S. Constitution. But is arrogant enough to think he does.

In a tweet in which Swalwell thought he was attacking Florida’s Republican governor, Swalwell revealed that he is blissfully ignorant of everything about America.

Swalwell was replying to a tweet by the Washington D.C. newspaper, The Hill, which reported that DeSantis blasted the left for “indoctrinating” kids with fake history. “They need to understand that our rights come from God, not from government,” DeSantis said.

Naturally, the shrill, anti-American left went nuts that DeSantis invoked God. And that sent Swalwell to his Twitter account to make the dumbest comment of the day, saying “It’s not like separation of church & state is in the Bill of Rights or anything.” 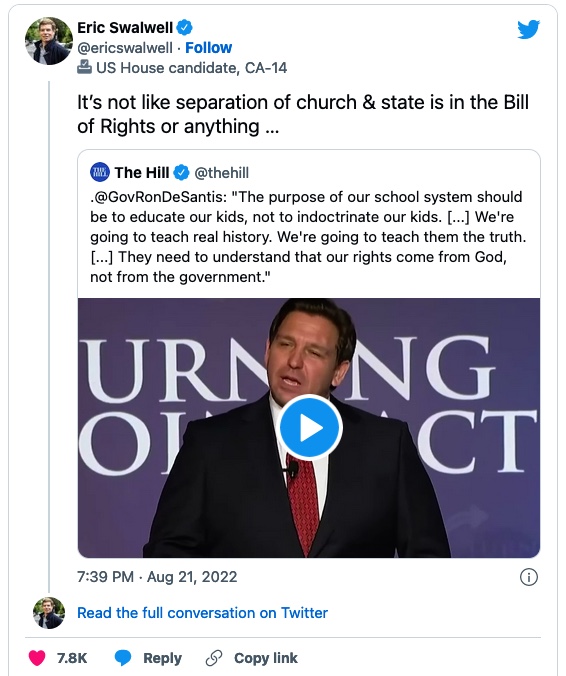 (Above is a screenshot in case he deletes it. Here is a direct link to the tweet)

What a moron. The words “separation of church and state” are nowhere in either the Bill of Rights or the U.S. Constitution.

In fact, they only appear in Thomas Jefferson’s letter to the Danbury, Connecticut, Baptist church written in 1802.

So many Americans have heard the phrase “separation of church and state” that they think it is actually written right into the Constitution of the United States itself. Those who are more learned on the subject realize it is not. Those who are learned on the subject also know that it wasn’t mentioned in any law, or even in the halls of Congress, until long after the Constitution was written. In fact, there was not much attention paid to the phrase at all until after Thomas Jefferson, the originator of the phrase, was long dead.

Not even the Supreme Court paid it much attention until the 1940s. So this “wall of separation” issue is not one that hails from the early Republic with the same meaning as it does today. Our Founders had very different ideas about religion and government, ideas that were not nearly as simple as the stark black or white assumptions of the activists of today.

The truth is, there was no expectation by the founders or any language placed in the Constitution whereby religion would be banished from the public sphere. So this mythical “wall of separation” does not really exist but in the minds of later day anti-religionists.

But, typical of ignorant leftists and Democrats everywhere, Swalwell is completely uninformed about the very country he was elected to serve.