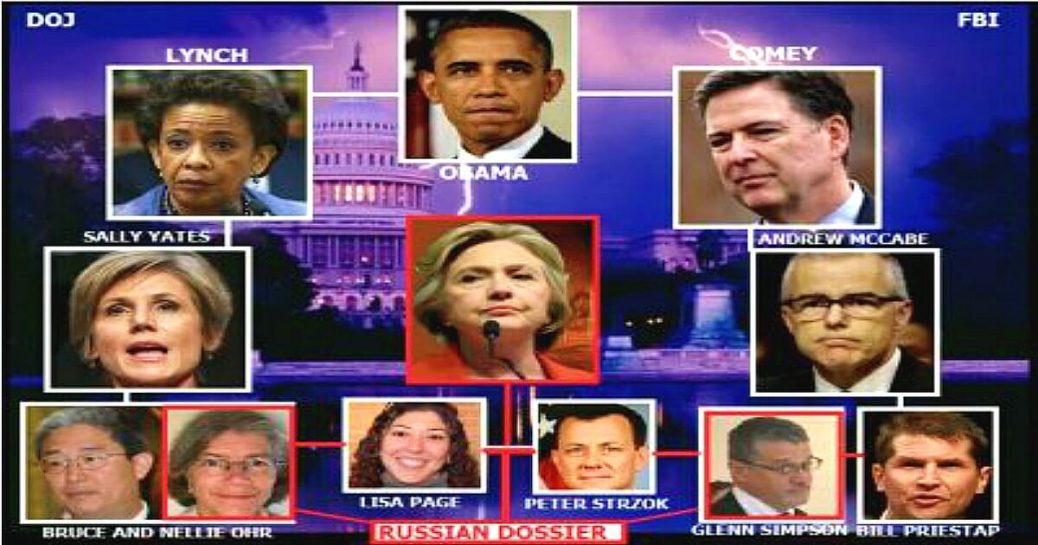 The “Deep State” refers to leftist’s seeding their operatives through the upper echelons of federal agencies like the DoJ, FBI, IRS, NSA, and others.  The depth of their corruption has become evident in congressional investigations into the Democrat’s “Russian Dossier” and operations like “Fast and Furious.”

Peter Strzok, Bruce Ohr, and Andrew McCabe are agents in the FBI and DoJ who violated their oaths by taking up cause with Democrats against Republicans.  American law enforcement may be partial, as is everyone, but they cannot be partisan, otherwise you get law enforcement – police and judges – who bypass laws to enforce their own beliefs.  This has been the corruption in the Obama administration from the top down.  That these agents are stonewalling a congressional investigation is proof that Obama’s corruption goes deep into federal agencies.

Obama’s Attorney General, Eric Holder, who was acting as America’s “Top Cop” was the first AG in American history to be held in Contempt of Congress because he refused to answer questions in a congressional investigation into his using the DoJ to sell firearms to Mexican Drug lords titled “Operation Fast and Furious.”  When the leader of America’s police and judiciary refuses to answer questions in a probe into corruption he is admitting to being neck deep in it.  Obama even attempted to extend his executive privilege to not answer questions over Holder, which is just one of the many violations of the Constitution he committed.  Obama consistently refused to either uphold or abide by Constitutional law and repeatedly violated that law by trying to make law from the Oval Office.  Fortunately, America came to its senses and elected a rock solid Christian conservative Republican to undo that error in judgement.  Trump’s record is as exemplary as Ronaldus Magnus’, and the NeverTrumpers who claim to stand for conservative values against Trump reveal themselves to merely be covert operatives of the Deep State, that state including RINOs of the Washington elitist establishment who work with Democrats.

Obama and his Deep State operatives, from Holder and Lynch on down through Lerner, Koskinen, Rosenberg, Comey, Mueller, along with these agents and those like them who were elevated under the Obama regime need to be rooted out, investigated, and brought to judgement.  This so-called Russian Dossier that was a fabricated story of Trump hiring Russian prostitutes to pee on Obama’s bed, which was found to have been commissioned by the Hillary Campaign through Fusion GPS, and used by Obama to obtain a FISA warrant by which to spy on the Trump campaign, has the fingerprints of leftists throughout the Deep State attempting to sabotage America.  Furthermore, more revelations are being made about Obama working with Iran against America.

(In light of their characters between Trump and Obama it is more likely that the Russian Dossier’s description of the act of hiring prostitutes to pee on a bed slept in by one’s political opponent was more likely done by Obama.  Trump, a man of epic accomplishment, would not seek vengeance by such a petty act of impotent rage, but would instead become the next president to undo Obama’s socialist machinations.  Whereas Obama, who demagogued his way to the presidency by winning popularity contests through smearing his opponents, and who has no accomplishment in his life, would fit that character perfectly.  This assessment is right in keeping with the characteristic leftist mentality to blame their failures on others and take credit for other’s success.  They always project what they think on those they despise such as accusing Republicans of being sex offenders and tyrants weaponizing government against them, which is exactly what Democrats are and have been doing when in power.)

What does it take before the nation wakes up to the fact that they elected an anti-American Islamist traitor to be president and prosecution brought to bear against him and his minions?  Hillary claims America does not “persecute” defeated political opponents.  Republicans don’t, but Democrats have proven they persecute them when they are defeated and even more so when they are victorious.

And now that Hillary lost they are using the FBI to persecute Republicans by violating their 4th Amendment rights to find anything they can use to charge them with some crime.  And if they can’t find anything then they are attempting to create process crimes to claim obstruction.  Democrats do not operate within the law, but operate as totalitarian, banana republic, police state dictators.  Republicans do not persecute, but do prosecute criminals, corruption, and traitors, and exposes media propaganda that constantly smears Trump to keep the public in the dark about all the great strides he is making in revitalizing America.