If there was any doubt that Russian President Putin was demented, he proved it again on Sunday morning. The Russian strongman ordered Russian nuclear deterrent forces to be placed on high alert because he described “aggressive statements” by the West. Does this mean Russia is willing to start a nuclear war because of its attacks on Ukraine.?

Like most despotic rulers Putin is not one to move back from aggressive actions they begin. Now that he has ordered his military to prepare his nuclear arsenal is the demented Russian leader crazy enough to unleash them.

This move may be a result of Putin’s anger that the Russian invasion is taking longer than he thought:

Putin’s progress seems to be slower than he anticipated as he thought it would all be over in less than five days, according to a member of the European Union Parliament who said he was citing Ukrainian intelligence reports.

Riho Terras, who is also the former defense chief of NATO member Estonia, tweeted: “Putin is furious, he thought that the whole war would be easy and everything would be done in 1-4 days.

“The Russians are in shock of the fierce resistance they have encountered.”

He also claimed the reports shows that the Russian military doesn’t have a “tactical plan” to take Ukraine.

Mr Terras also shared an image of what appears to be an intelligence report that is in Russian and wrote: “Putin is raging. He was sure it would be a cakewalk.”

But the Ukrainian people aren’t panicking. They are doing anything to protect their country, picking up guns to fight, creating Molotov cocktails, promising to fight the Russians with knives. One Ukrainian brewery has stopped bottling beer. They are distributing their bottles to people who will use them to create Molotov cocktails.

Perhaps the factor motivating the Ukrainian people the most is their President Vladimir Zelenskiy. The Russians have made a list of people to kill once they take over the country, and Zelensky is at the top of their list. Many leaders would run and hide in the same position. The U.S. even offered to pick him p and bring him into a safe exile. Zelensky refused. Every morning, the President of the embattled country addresses his people from the capital city’s streets. 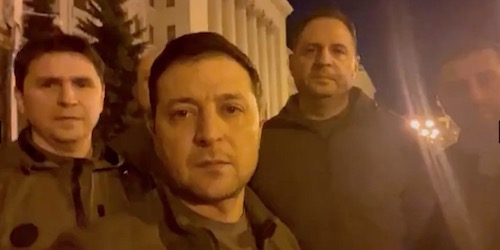 Adding to Putin’s fury is that the Russian people are unhappy with his invasion of Ukraine. So far, protests have broken out in 26 Russian cities. These protests are happening despite “Russia’s Investigative Committee warned that participation in any anti-war protest was illegal. It also said that offenses could be entered on participants’ criminal records, which would “leave a mark on the person’s future.”

Free nations of the world are acting to help Ukraine, but sadly it may be too late. Because of the Russian advances, it will be challenging to move additional weapons into Ukraine. While the Russian invasion is going slower than expected— it is going. Despite the heroic action of the Ukrainian people, it’s hard to believe that the demented Russian leader won’t eventually take over the country. If Putin’s puppets take over Ukraine, the war will not be over. Patriotic Ukrainians will become guerrilla fighters. At that point, will the NATO countries dependent on Russian oil (thanks to Biden) continue their sanctions on Russia, and will they ramp them up, so they start affecting the Putin economy?