The Deliberate Destruction of the “Moral Fiber” of America is Now at Crisis Level! 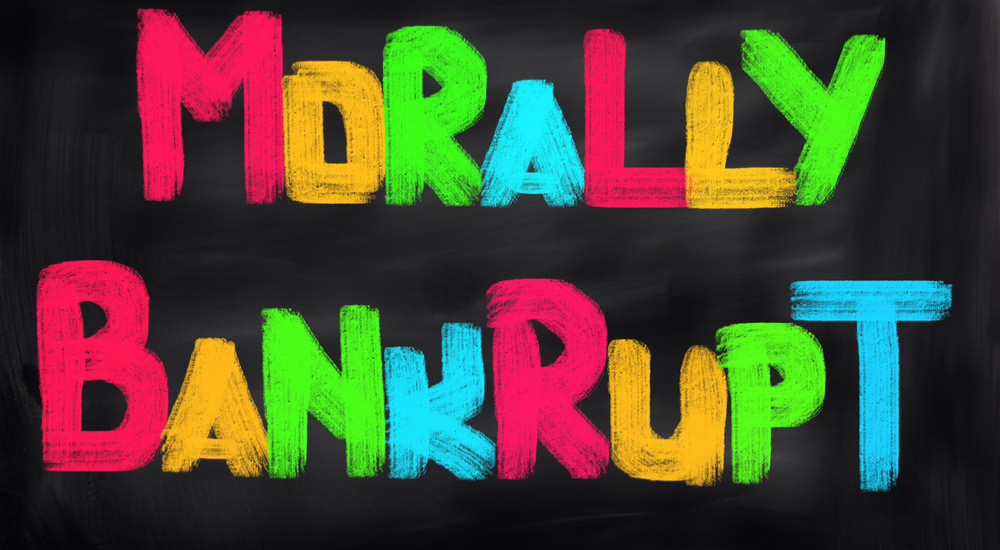 Moral: of or relating to principles of right and wrong in behavior

Fiber: essential structure or character – the very fiber of a person’s being

Over the last few years I have become increasingly dismayed at some of the things I continually hear and see happening in America. As I watched the Democrats, RINO Republicans and Main Stream Media (MSM) over the last few days I noticed they all have one thing in common, a total lack of MORALITY!  If you really think about it, everything they do can be viewed as a deliberate attack on the “moral fiber” of our American way of life. Whether this is a specific “Liberal” plan or not, this is how they are steadily achieving their goal of maintaining the status quo in Washington, D.C .For them the “Swamp” must remain in place for their personal pleasure and enrichment. And too many people in America have become part of their plan! Politicians of all stripes, PARENTS, college and school administrators, school teachers, and professors are, wittingly or unwittingly, steadily helping the Liberals destroy the “moral fiber“ of America.

Here are a few examples of the increasing lack of morality in America:

The Democrats are obsessed with destroying the Trump Presidency, and the RINO Republicans and MSM are helping them. They are all obviously willing to say and do anything imaginable, even immoral to accomplish that objective.

Politicians from all parties are proving to be Academy Award winning level actors including two RINO’s I once had some level of faith in, Rubio and Kasich. These two RINO’s, and others, showed their true colors when they lost the Republican primary to Trump. They stood on the debate stage, on camera and took the oath to support the winning candidate whoever it was, and then immediately refused to honor that oath as soon as they lost!

Many of our school systems are allowing hard Left radicals to continue to teach (indoctrinate) students and they are graduating students who can barely read or write (political correctness). In some instances grade school teachers are openly participating in violent protest, radical rallies and “acting out” in the class rooms and are still “teaching”.

Our colleges and universities are overwhelmingly being run by hard Left radicals and staffed by hard Left professors. In many cases radical student groups have literally “occupied” the schools and are openly organizing disruptive activities. Even schools like Notre Dame are beginning to experience this outrageous behavior.

One of the most influential groups of people contributing to the decaying morality in America is PARENTS”! Some parents joined in with the students who walked out of the recent Notre Dame Graduation ceremony when V. P. Mike Pence began to speak.

The Democratic National Committee has become one of the most corrupt and crude organizations in the history of America. Openly rigging the primary for Hillary and then electing a new chairman with a very dirty history who is traveling around America giving profanity laced speeches.

At the California State Democratic Convention the election of the new chair person was so contentious that the runner up refused to concede and has hired lawyers to sue the organization. Also during the convention the attendees performed one of the crudest acts I have ever seen an organization like this do publicly. A poorly dressed man standing at the speaker podium looked at the people standing around him on the packed stage, smiled, leaned into the microphone, and said “Trump”. Instantly everyone in camera view raised BOTH hands in a “middle finger salute” with a big smile on their faces! Yes, this was on the stage at the California State Democratic Party Convention!

As noted earlier the Democrats, RINO Republicans, and MSM are totally lacking in MORALITY and are totally obsessed with maintaining the status quo in Washington, no matter what the cost to America is!

What can we do about this “crisis”? Like we did in November 2016, we must stand up and make our voices heard. Insist on term limits and refuse to support politicians, organizations or media outlets that are dishonest and Un-American. Let President Trump know we support his Administration ANY WAY HE NEEDS US TO!

I have written a number of detailed articles about everything I have touched on here and a variety of other similar topics. You can find them all on my website, www.onlymakessense.com.