In Defense (Not Really) of Anthony Weiner 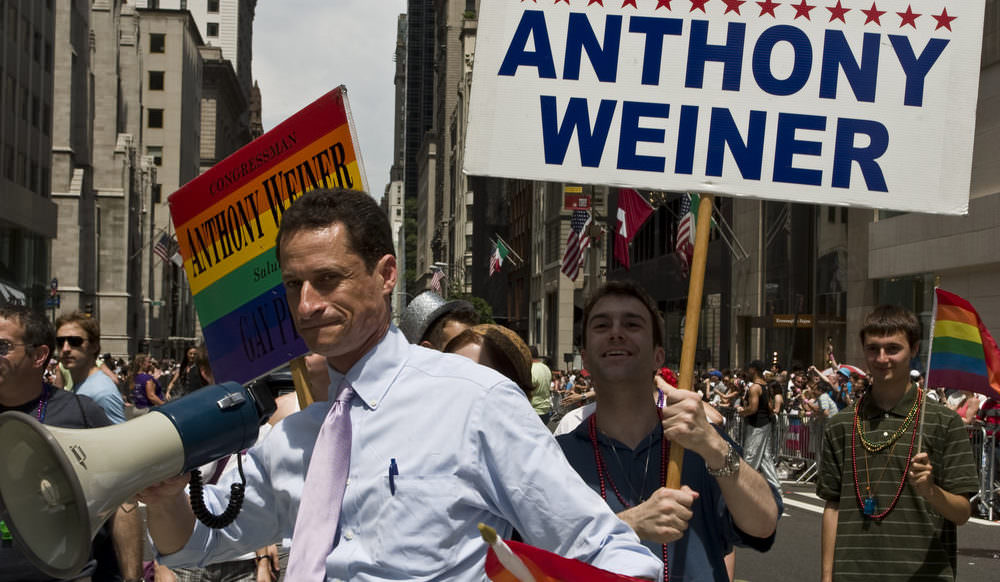 NEW ITEM: Scroll down for the audio version of this article.

I think we can all agree that Anthony Weiner, aka Carlos Danger, is a big steaming bag of pooh. I mean – taking a photo of one’s barely covered man sausage with your young son right next to you in bed? That’s pretty low – even for him. Actually, I guess it isn’t being that this is evidently not the first time he has used the kid as a “chick magnet” (his words).

Sadly, I’m sure he’s not the only dad doing this sort of thing. He’s just the most famous – and possibly the dumbest. That, or he is so desperate for any attention, he just doesn’t care.

However – is Weiner really doing anything worse than the potential “first dude” has done? When you think about it, Weiner appears to just be the 21st century Bill Clinton. Does anyone think that if Bubba had available this type of smartphone technology in the `80s and `90s, he wouldn’t have used it to its fullest? Darn right he would’ve.

In fact, Bill Clinton is a much bigger dirt bag than Carlos. Weiner’s hook-ups at least appear to be consensual, where as – well – we all know about Clinton’s abhorrent exploits. Yet Bill Clinton is treated like a rock star, while Weiner, whose marriage appears loosely patterned after Bill and Hil, is just a disgraced deviant.

Bill was and I suppose is technically still married to a power-hungry domineering shrew. I have no way of knowing, but I’m going to guess that Huma is the second coming of Hillary, and Weiner was hung out to dry long ago as Huma became joined at the hip with Hillary – like some sort of mini-me.

However, one could make the argument that Weiner is just the victim of a sexist double standard. Sure, he’s a dirt bag. If he’s so unhappy, why not divorce the Hillary want-to-be, and then he can sext to heart’s (or something elses) content. But this isn’t my

Go on the internet, to any “entertainment” or gossip website and what do you see – dozens of times over. That’s right – women, many of them married and with children, in various forms of undress. They may not be sexting, but they are soliciting – soliciting a reaction from their thousands or millions of so-called fans.

Not a day goes by where there aren’t countless models, starlets and fame-hogs gleefully sharing photos of themselves in barely-there bikinis, lingerie which leave little to the imagination, or nothing at all.

Of course the crown-princess of tastelessness is Kim Kardashian. She is single-handedly responsible for the latest mania – the naked selfie. No one is forcing her to act the way she does – she obviously loves the attention. Like a drug, it appears she must have it.

Is anyone brow-beating Ms. Kardashian over her naked selfies? No. Instead, the public says little to nothing critical which only translates, in her small brain, to approval. And monkey see, monkey do – many other attention-seekers have begun sharing their
un-clothed selfies with the world. But poor old pitiful Weiner takes a picture of his covered “package” and the press and public goes nuts. To me, that’s a clear double standard.

Many have said, and rightly so, that it’s one thing for him to be doing this, but to be using his child is quite another. At the very least, this kid is going to grow up and see these sexts. Imagine what he will think. For that reason alone, Weiner should be admonished.

Maybe so, but last I checked, Ms. Kardashian has two children, who will also be treated to her thousands of de-clothed selfies – yet I hear not a peep about the negative effects on them – although it may make no difference as they are already doomed to a life of dysfunction, being that their father thinks he is Christ and their mother is… well… Kim Kardashian.

In a way, I almost feel bad for Carlos Danger. Yes, he’s a total perv, but he’s also a pitiful soul, virtually abandoned by his, more than likely, tyrannical wife – left to be Mr. Mom, while Huma is off trying to get her Mafia boss elected. He probably feels his “manhood” is the only manhood he has left.