The Deep State in the Age of Trump 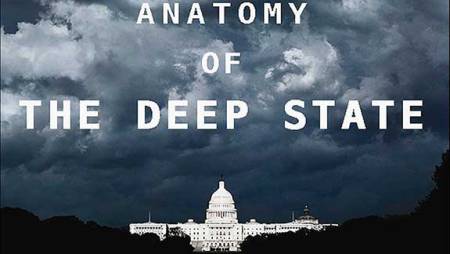 Politics as usual, especially the party version of Republicans and Democrats is the latest endangered species to hit the bone yards of extinction.

Now, that does not mean that competing power factions have all merged into a collegial stew of some imaginable melting pot. No the literal power behind the government that embeds the deepest recess of manipulated reality still maintains and uses their influence and coercion force to remain in control. What actual effect Donald Trump will have to break the connections that keeps the deep state in charge can only be judged with the passage of time. Some contend that Trump is actually an integral component of an elitist fraternity of financial magnates that sit at the table of the deep state.

Well, assessing the appointees to his cabinet concludes that talented and accomplished achievers often have accumulated great wealth. Those who condemn capable people, out of hand, because of their money acumen are fools who reside in their fantasy theories. Much like the 68 House Democrats, who boycotted the Trump inauguration, their irrelevancy in the actual mix of shaping world affairs approaches the insignificance and lack of credibility from the Corporatist Mass Media.

In the era of Trump America First, how will divergent cliques and kindred insiders react, respond or cooperate with the new sheriff in town? The strange concept of conducting affairs in a beneficial national interest has not been tried in well over a century. So when the Hill reported that the Trump team prepares dramatic cuts “Overall, the blueprint being used by Trump’s team would reduce federal spending by $10.5 trillion over 10 years”, can only be viewed as a promising sign.

Notwithstanding, budgets do not translate directly into political influence or clout. Consequently, understanding the raw nature of power in this artificially concocted construct that claims that globalization is the only course for human endeavors requires an examination of a state within a state.

With the long ongoing hubbub at the Central Intelligence Agency, what better example of the deep state is there to examine the conflict within? In case you missed the memo, peel back the layers on the onion, CIA director John Brennan is a Muslim convert? Understanding this background puts Glenn Greenwald, not exactly a fan of Trump, essay The Deep State Goes to War With President-Elect, Using Unverified Claims, as Democrats Cheer, in even a greater relevance.

“But cheering for the CIA and its shadowy allies to unilaterally subvert the U.S. election and impose its own policy dictates on the elected president is both warped and self-destructive.

For months, the CIA, with unprecedented clarity, overtly threw its weight behind Hillary Clinton’s candidacy and sought to defeat Donald Trump. In August, former acting CIA Director Michael Morell announced his endorsement of Clinton in the New York Times

In general, Clinton defended and intended to extend the decades long international military order on which the CIA and Pentagon’s preeminence depends, while Trump — through a still-uncertain mix of instability and extremist conviction — posed a threat to it.”

Presenting a different perspective Charles Hugh Smith offers a simple, yet succinct definition of the deep state: “It is the unelected government that continues making and implementing policy regardless of who is in elected office.”

He goes on to ask: Does a Rogue Deep State Have Trump’s Back?

“Given my thesis of a profound disunity in the Deep State, and the emergence of a progressive element hostile to neocons and neoliberalism (including Wall Street), then it’s not much of a stretch to speculate that this rogue Deep State opposed to neocon-neoliberalism has Trump’s back, as a new administration is pretty much the only hope to rid the nation’s top echelons of the neocon-neoliberal policies that have driven the U.S. into the ground.

Rather than being the bad guys, as per the usual Liberal world-view, the Armed Forces may well play a key role in reducing the utterly toxic influence of neocon-neoliberals within the Deep State.

If you have wondered why academics like Paul Krugman and the CIA are on the same page, it’s because they are simply facets of the same structure. Krugman is a vocal neoliberal, the CIA is vocally neocon: two sides of the same coin. I invite you to study the chart above with an open mind, and ponder the possibility that the Deep State is not monolithic, but deeply divided along the fault lines of Wall-Street-Neocons-Neoliberals and the progressive elements that rightly view the dominant neocon-neoliberals as a threat to U.S. national security, U.S. global interests and world peace.”

This viewpoint might stretch the boundaries of normally accepted interpretations, since the establishment has seldom before needed to worry about an “Outsider” gaining the Presidency of the United States. In light of the desperate meltdown from intelligence agencies using their unconvincing assets in the fake news media, a struggle for the heart and soul of America is being played out between the propaganda press and the real truth tellers.

So when President Trump Visits CIA: “I Am So Behind You”, the natural response is why does Ex-CIA chief Brennan labels Trump ‘despicable’?  Well, the struggle demonstrates that the vision of the establishment is in a total panic to save their imperial empire, while Trump’s mission is to apply a nationalistic policy that is diametrically in opposition to the globalists that thrive on continued conflict.

When the deep state makes policy, the system destroys any semblance of legitimacy.

Just how far are the forces of Machiavellian supremacy within the deep state willing to go to eliminate opposition to their power? When a lapdog publication like The New Yorker runs a feature ROGER STONE VERSUS THE “DEEP STATE”, you know that the cover-up can no longer be contained or kept from the American public.

“Stone is intelligent and witty, and it is often jarring to listen to him as he turns from a sober analysis of politics to bizarre conspiracy theories. He is a frequent guest on Alex Jones’s Infowars radio show, where he recently alleged that he was poisoned by unspecified enemies in the “deep state,” his term for American intelligence operatives. He told me that the C.I.A. invented the allegations of Russian hacking and an influence campaign to help elect Trump directed by Vladimir Putin because the agency wanted to go to war in Syria.

“The C.I.A. has their assessment,” he said, emphasizing the last word. “Assessment means guess. The President-elect hasn’t been shown proof because there’s no proof to be shown. The deep state needs to get over it. Their candidate lost. They wanted a wider proxy war in Syria, and Trump is not for war. He is for détente.””

Nations always seek to develop their clandestine spying networks. No rational citizen would argue to eliminate intelligence acquisition on foreign countries or competing interests. However, the progression of the deep state has been fostered and enhanced by many elements in society. Most have little respect for the constitutional separation of powers delineated in the U.S. Constitution.

Espionage was a major factor in George Washington’s victory in the American Revolution. Conversely, the CIA has empirically established that the forces of imperium have maintained control over the rightful authority of our nation going back to the Allen Dulles era.

Donald Trump’s appointee, Mike Pompeo will become the next DCI. It falls to him to defang the snake from making policy. The role of intelligence is to gather, analyze and interpret information. Black bag, covert wars and overthrowing governments has no place under the auspice of a band of Yale Skull and Bones internationalists.

The CIA must be restricted to providing superior and accurate briefings to the President. The military command needs to be placed in charge of any clandestine operations that strictly follow an America First standard. Arrogant civilians who profess to be connoisseurs of spy craft have proven to be dilettantes of Operation Gladio warmongering.

Pompeo would be well served if he would listen and heed the wisdom of two ex-CIA patriots, Michael Scheuer and Ray McGovern. Of course their counsel on the Middle East would conflict with Jared Kushner love affair with Israel. This example illustrates the complex twists that complicate the feuds within the deep state.

Based upon the early direction in the Trump administration, the deep state money changers will not be challenged. Regretfully, the shadow governance is too widespread and entrenched to be removed in one executive action. This fundamental abdication of recognizing the eternal enemy of the Republic will undermine any positive attempts that revolve around the edges.

The deep state is the establishment which runs rough shot over the lackeys in Congress who must beg for money for re-elections. The entire executive branch of agencies and departments has bred collectivist toadies among their ranks of the welfare state. And the esquire class has perverted the rule of law to mean whatever absurd pronouncement of equity that the courts dictate. The deep state hates the populist will of loyal Americans.