My Dear John Letter to the GOP 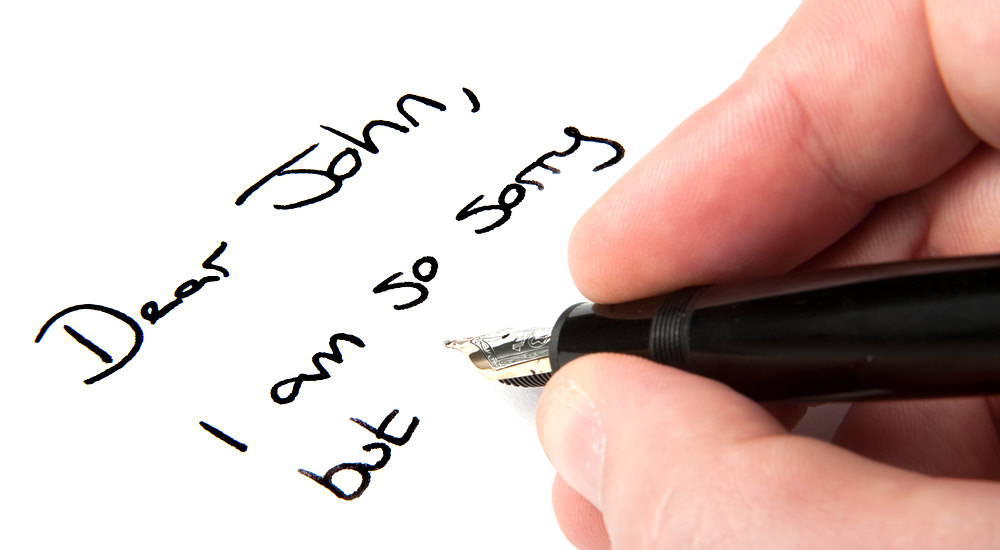 I’m not sure if there is any good or easy way to say this, so I’m just going to come right out and say: We are thru!  We are done, I am finished with you, it’s time for us to separate.  I know, I know, that you are going to try to remind me of all the good times we had together, but lately, I have been losing respect and any feelings for you.

I remember when it all started.  I remember the first time we met during the campaign of 1976.  I was young and naive when you told me that Gerry Ford was the best man for the job.  Well, that didn’t go over very well, now did it.  But I stayed with you.

The next time was the time when you hit the jackpot.  Ronald Reagan was the man whom you told me would bring us back to greatness and restore prosperity in our land.  Boy, were you right!  I sat back and watched him transform the land, make us prosper again, and restore America’s greatness across the globe.  Sure he screwed up a couple of times, but that wasn’t the point.  The point was that he made us feel better about ourselves and got us to believe in ourselves and our country again.  I was proud and happy to stay with you.

I wasn’t to sure about your next pick, George H.W. Bush.  I was hoping that him being part of the Reagan administration for eight years might have rubbed off on him.  But you told me that it was OK and that he was as conservative as Reagan was.  Good thing for you that you were right.  I dutifully put on my uniform and served in his Persian Gulf war against Saddam Hussein.  Maybe I missed it but this was the time that the cracks in our relationship began to surface.  The campaign of 1992 was a tough one and, even tho we lost, I still stayed with you.

During the 2000 campaign the cracks began to get deeper.  I wasn’t too sure about George W. Bush because he really didn’t sound like a conservative.  He told me he was a “compassionate conservative”.  When I asked you what that was, you told me to never mind and just vote for him, because, if I didn’t,we’d have Al Gore which was suppose to be worse.  So I listened to you, held my nose and voted for Bush.  It didn’t really turn out that bad.  In spite of the fact he ran up the deficit, and got us involved in two unwinnable wars, I will always remember him as the rock and the glue that held this country together after 9/11.  So I stayed, not really wanting too.

I can honestly say that the 2008 campaign was when I really noticed the divide between you and me, my gentle GOP.  We lined up conservatives that we wanted, only to be told that Lame John McCain was to be our standard bearer.  I got more enthusiasm popping a zit on my face than I did for McCain.  When I protested you told me to be quiet.  You tried to scare me by telling me that it was either McCain or a Democrat who would be worse.  So I lowered my head and voted the way you told me and we lost.  The same happened in 2012 with Granite Mitt Romney.  Again he was suppose to be the best man to upend Obama, but he too lost.  I stayed with you but I don’t know why.

Now comes the election of 2016.  You decided that the Cheetos Man is to be our standard bearer.  A con artist, a liar, a braggart, a Democrat in Republican clothing, and everything else I find despicable in a candidate.  You keep telling me that if I don’t fall in line and vote for Donald “Sandman” Trump, than the Democrat will win which will be worse for us.  You know what, GOP, I’ve heard this song before, too many times.  To be honest with you, I don’t care if Hillary wins.  I am tired of having to always shelve my principles to that you can win and keep your power and money.

So, GOP, we are done.  I don’t know where I am going to go.  Maybe out there is a party that believes that principles are more important than winning.  Maybe I will be done with politics, I don’t know.  God knows that being involved really hasn’t gotten me anywhere.  Besides being done with you, GOP, another thing I know is that this country will survive.  It will survive because there are more people out there who stand for something.  If you stand for something you won’t fall for anything.  A lesson that I had to learn the hard way with you, GOP.