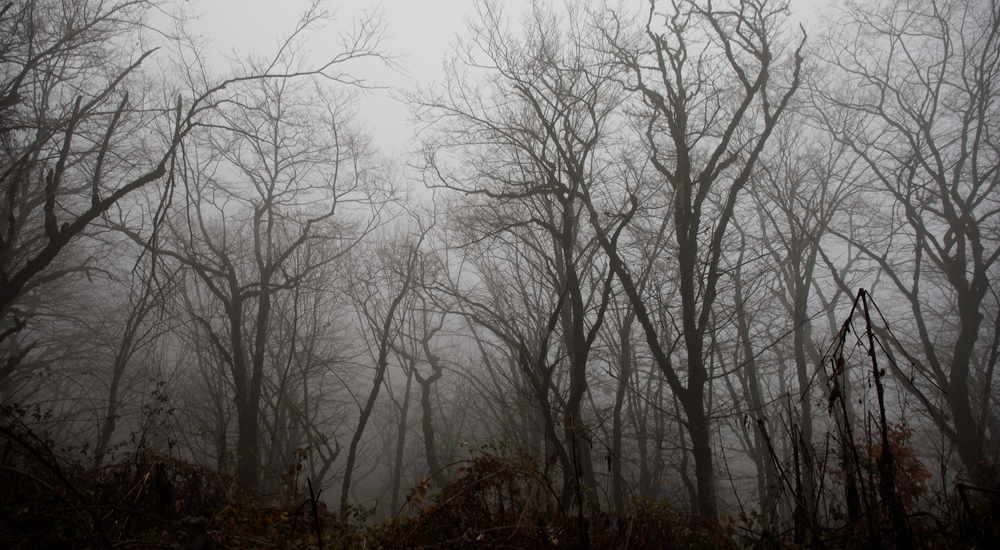 Environmental groups, primarily the Sierra Club, wail about wanting everything to be “natural,” claiming that everything man does, especially logging, endangers the forests.  The above picture shows all the tinder-dry dead trees that have been allowed to accumulate due to actions of the Sierra Club and Governor Jerry Moonbeam Brown.

Before neurotic environmentalism, these trees would be removed by logging, create jobs, lumber and reduce home building prices. Today, removing these trees is not allowed as that there are so many expensive regulations and permits needed for such logging it is no longer done.

Dead trees have to be removed quickly or they lose their value for lumber due to wood rot and worm infestation thus all in the picture are worthless other than that removing them would save buildings and lives.

California forests are now ten times as overgrown as they were in the ’60s. While it is often said this is “Federal land,” it is not as often claimed.  The Federal government owns very little land, but put forests and rangeland under the Bureau of Land Management as it has not been purchased by the Federal Government.

The Fifth Amendment of the US Constitution stipulates:  “…nor shall private property be taken for public use, without just compensation.”  i.e. market value.  Thus the “Bureau of Land Management” is in each state “…at the pleasure of the state,” and can be told to “Get out!” by any state Governor.   Therefore, this situation is placed completely and entirely at the feet of Governor Jerry “Moonbeam” Brown.

It has been erroneously claimed the US Government owns “most of the forests in California,” but they do not.  And there is even a question about their claim on the “National Forests.”  When and how much did they pay for them?  And, for what they did pay, was it proper or in question?

California has regulations about logging private land. They have made it so expensive to log private land they have bought the problem.  They are now to blame.  It is just that simple.

Since the fires, Governor Brown has relaxed the regulations to more reasonable charges, but his action is “after-the-fact” so billion Dollar litigation is coming as the impacted property owners are so easily defined.

Is “climate change” responsible?  Since 1870 the average temperature has increased by 0.8 Celsius, 1.28 Fahrenheit degrees. 148 years and an amount so small it could not be determined from one year to the next.  The increase in CO2 from 280 to 400 parts per million has increased growth rates, but where that may have increased growth by 30%, as it did in corn and oranges, it only makes the quenching of wood harvest that much greater a crime!  So, the Federal and State governments are that much more complicitous and liable.  How ironic that something good for the trees turns out to be bad for the people paid to protect them.

The US Forest Service in 2014 documented that mortality for trees was rising in the West (but decreasing in other parts of the US). Much of this was linked to beetle infestation. https://www.fia.fs.fed.us/librar…

Is there a link between warmer summers and beetle infestation? There are some studies that point in that direction. https://www.fs.fed.us/rm/pubs_ot…

As for one answer saying there are more fires. This is not correct. In reality, there has been a trend toward fewer fires in California. Over the last 40 years, the number of wildfires in California has decreased, probably due to the decline of cigarette smoking with people tossing “butts.”

While the number of fires has decreased, The size of the fires in California have increased. So what has changed in this time frame so that fires are more intense? Logging has been severely limited.

Yes, there are those that say logging will not reduce the risk of these types of fires!

As for the environmental impact of logging on wildlife?  The spotted owl has been protected for 34 years, but it is still in decline. One million plant and animal species vanish every year as nature moves forward.  Every species ends at some point, as will we probably to be replaced by cockroaches.  Stopping logging, at the insistence of the Sierra Club, has had no effect on the destiny of the Spotted Owl. But we know we have lost more forest area to these fires than what we did to logging.

Thus, logging will return. Jerry Brown will be gone.  The Sierra Club will fade to nothing and life will continue whether we learn, or not.