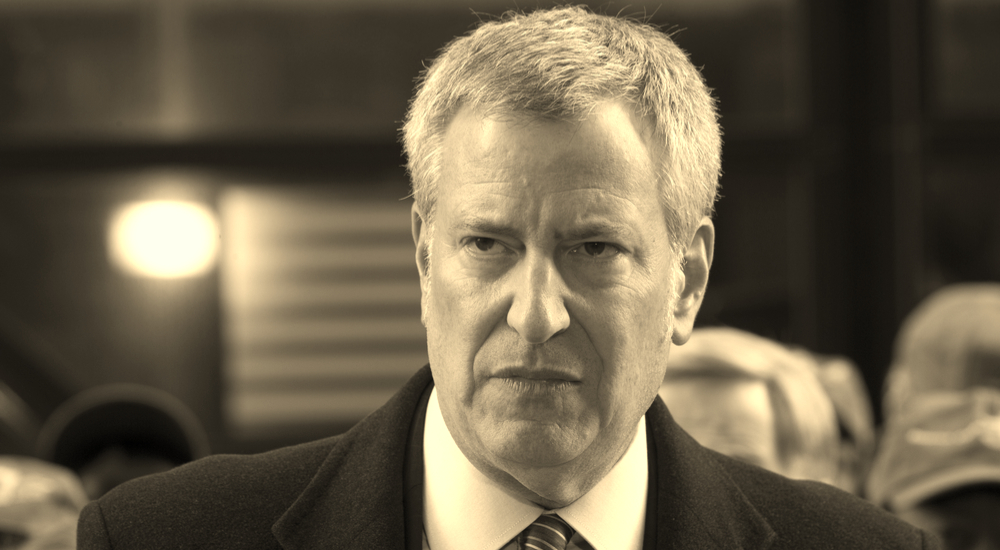 So its going to cost the residents and businesses $14 billion to attack global and combat climate change. I dedicated part of this past weekend’s video podcast to just this very thing. Not global warming, but to how the left just gets to make these wild claims without being challenged. Who would challenge them? The Daily Eagle is just parroting de Blasio’s talking points. So much for holding politicians accountable.

And I love the tens of thousands of new jobs. Doing what and paid for by whom? And why 2030? What happens in 2030? Answer – nothing. The year is just arbitrary. It’s close enough to cause the uncurious and dull-witted a sense of panic to “get things done,” but far enough away for people to forget what was claimed, as we close in on it without the world ending. The date was probably focus-grouped.

Okay, back to the propaganda.

“Every day we wait is a day our planet gets closer to the point of no return,” de Blasio said. “New York City’s Green New Deal meets that reality head-on. We are confronting the same interests that created the climate crisis and deepened inequality. There’s no time to waste. We’re taking action now before it’s too late.”

The point of no return – before it’s too late? Really!! We’ve been hearing this same crap for about 40 years – claims these radical leftist environmentalists make of catastrophes to come, yet somehow we’re still here. Notice they never actually explain what will happen. And I mean none of them – not these idiot political hacks or the so-called scientists.

If they claim anything they might say something like if we don’t do X the temperature may rise (notice it is always may or possibly – never will or definitely) by 1 to 2 degrees Celsius. Somehow that’s supposed to be alarming. But no normal person even knows what that means, because we don’t use Celsius, just like we don’t measure things in meters.

Now I defy anyone to walk outside and tell me they can sense the difference between 81 and 84 degrees. It’s not going to make the slightest difference to humans, animals or plants. But you never hear anyone questioning these nimrods.

And deepening inequality? What the heck does that have to with anything? Newsflash: the world will end tomorrow – women and minorities hardest hit! As if the rich will somehow be able to survive and the poor won’t. It’s like negotiating with a terrorist who says if you cooperate, I’ll kill you last.

“All buildings of 25,000 square feet or more, of which there are 50,000 citywide, will be required to make efficiency upgrades that lower their energy usage and emissions or they will face steep penalties. The need for stringent mandates was non-negotiable,” de Blasio said at a press conference on Monday. “There’s too much at stake.”

But I’ll tell you what’s at stake – the viability of NYC. Companies are going to just start leaving in droves and those who can’t are going to close.

For Brooklyn Borough President Eric Adams, however, one of the most exciting aspects of the Green New Deal is the city phasing out its reliance on processed meat and reducing its purchasing of beef by 50 percent.

“I am particularly thrilled that this city has taken up our mantle to reduce our overconsumption of meat through the phasing out of processed meat purchasing and the reduction of beef purchasing,” Adams said. “Make no mistake, addressing the carbon-intensive activity of meat production is a sustainable solution for the health of our bodies and our planet alike.”

I’ll bet Nathan’s hot dogs is thrilled by that news. And see the little addition of mandating what we eat. Nice trick. It’s all about control.

And another inconvenient truth. If everyone is forced to become a vegetarian, how many more forests will have to be destroyed to make way for all organic farmland? But we’re not supposed to even consider that.

Almost every NYC politician is predictably on board with this lunacy. Of the 44 council members voting, only two opposed de Blasio’s idiotic plan.

And I’m sure, like Mayor Bill, all 42 members are already living the “green” lifestyle. Right.