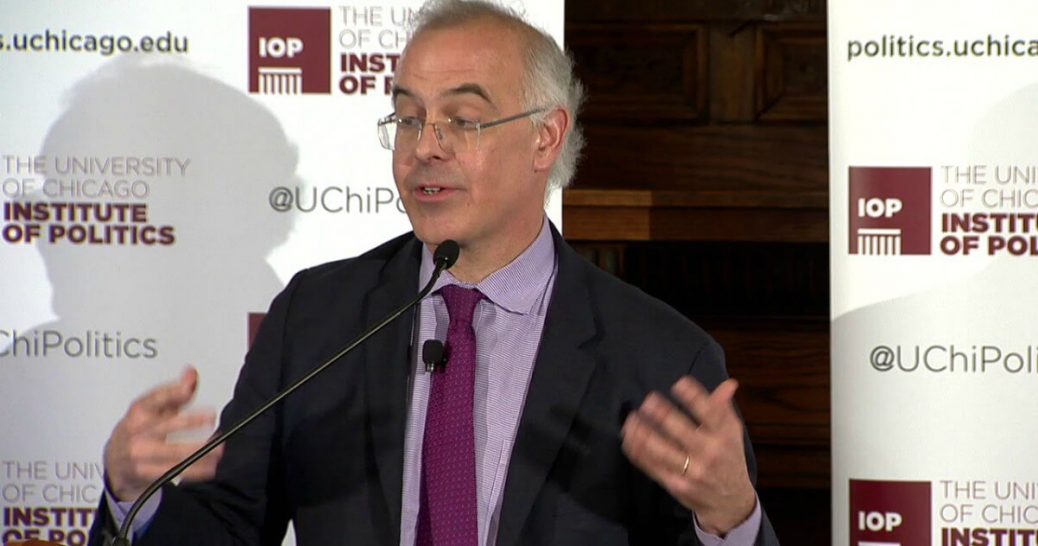 David Brooks, is one of the more expressive major media journalists due to his regular appearances on the PBS News Hour.  He is the New York Times faux conservative and achieved fame in 2007 by reporting Barack Obama would be a great President “…because of the sharp crease in his pants!”  David made the stunning observation at the Washington, DC dinner party given by George Will to introduce the Democratic Party nominee to the press.  Rush Limbaugh has kept this gaff alive by repeating it regularly, much to David Brooke’s consternation, but he is not to be discounted.

Born in Canada, the son of two academics, Brooks is an American patrician proving recently in a response to a PBS Newshour anchor’s question about President Trump’s actions on North Korea, he was asked:

“Do you think that was a smart move?”

“I think so,” said David, One of the things you know of the President:  He comes from a background basically in the real estate business where he worked with a lot of thugs and he cultivated thugs and he is thuggish himself, but in my view that helps him for all his drawbacks in understanding thugs and so in North Korea he understood that being a thug, as he is one of them, and produced some results so we are basically better off with North Korea than we were otherwise.”

In spite of her deep frown, Brooks continued: “He is much tougher with the Chinese on trade and a lot of people think he adopted the right policy.  Sometimes you gotta just stand up to people.  In Iran I have very mixed feelings whether Trump did the right thing, but President Obama, the argument he made for it, was that Iran would moderate and become a more familiar company in the community of nations, that has turned out to be clearly false.  They are the most genocidal nation on the face of the Earth.  They export violence and terror around the Earth and so Trump’s standing up to them at least has some legitimacy, is valid, so his argument is valid.  It is possible he understands people like that more than people with higher SAT scores.”

Ever the snob, David had to finish with a jab for our President.  This is a classic swamp bottom feeder comment when the “Olde Garde” is not in charge they lash out in this way.  Mr. Trump and friends scare the likes of David Brookes profoundly!  Nonetheless, Mr. Brookes continues on this tack in print where some of his associates will say one thing on TV and another in print forgetting that videotape makes their utterances on camera more permanent and powerful than pieces in print. The world has changed under the likes of David Brookes, but he is one of the few who realize it.  In his May 12, 2018 New York Times column he wrote:

“We’re all educated by our peers, and, over the years, a good portion of Donald Trump’s peers have been thugs. Operating in the New York construction world meant dealing with “S and A” Concrete, co-owned by “Fat Tony” Salerno of the Genovese crime family, and John Cody, the notorious head of Teamsters Local 282, who was convicted on racketeering and tax evasion charges.

Building casinos in Atlantic City brought Trump into similarly genteel circles. Trump’s hero was Roy Cohn, who unfortunately was born too late to serve the emperor “Caligula.” To go to Trump parties in the 1980s was to be surrounded by C-list celebrities and shady business types voted Most Likely to be Arraigned in high school.

Trump’s fixer Michael Cohen emerged from the same galaxy of gray-market hustlers. Early in his career Cohen worked for a lawyer who pleaded guilty to bribing insurance adjusters. His ex-business partner in the taxi industry was convicted of assault in New York, arrested on battery in Miami and pleaded guilty to criminal mischief in New Jersey.”

(Note:  “pled” is the past participle of “plead.”  So much for the upscale Radner High School in Philadelphia and the University of Chicago an where is the editorial staff of the New York Times?  This ran in the paper! Meanwhile back at the text crime scene:)

“About 15 years ago Cohen set up businesses for two doctors, one of whom was later charged with insurance fraud and grand larceny, the other indicted on racketeering charges. As a personal injury lawyer, he frequently represented people accused of insurance fraud. An uncle provided medical services to the Luchese crime family.

If not for the Trump and Cohen peer circle, white-collar prisons would be sitting empty. And this all happened before Trump and Cohen elevated their moral associations even higher by entangling with Russian oligarchs.”

(Note: An “oligarch” is a ruler.  Russia has one ruler: Vladimir Putin.  Where do the David Brookes of the world get off calling wealthy Russians “oligarchs.” They are not, but it sounds terrible.  Meanwhile back at the text.)

“And yet I can’t help but wonder if that kind of background has provided a decent education for dealing with the sort of hopped-up mobsters running parts of the world today. There is growing reason to believe that Donald Trump understands the thug mind a whole lot better than the people who attended our prestigious Foreign Service academies.

The first piece of evidence is North Korea. When Trump was trading crude, back-alley swipes with “Little Rocket Man,” Kim Jong-un, about whose nuclear button was bigger, it sounded as if we were heading for a nuclear holocaust led by a pair of overgrown prepubescents.

In fact, Trump’s bellicosity seems to have worked. It’s impossible to know how things will pan out, but the situation with North Korea today is a lot better than it was six months ago. Hostages are being released, talks are being held. There seems to be a chance for progress unfelt in years.

Maybe Trump intuited something about the sorts of people who run the North Korean regime that others missed.”

(Note:  “Intuited” is not a word.  The appropriate word here is “thought.”  “Mr. Trump thought something…”  Again, we return to Mr. Brookes…}

“The second piece of evidence is our trade talks with China. Over the past few decades, the Western diplomatic community made a big bet: If we all behaved decently toward Chinese leaders, then they’d naturally come to embrace liberal economic and cultural values and we could all eventually share a pinot at the University Club.”

(Note:  “The second class of evidence” is the trade talks with China.  But, Mr. Brookes rightly exposes liberal hypocrisy in this paragraph.  Again we return to the piece…)

“The bet went wrong. Today’s Chinese elites are polite and coolheaded, but their economic, political and military behavior remains pure thug. Beijing throws its economic weight around with abandon, punishing foreign firms like Mercedes-Benz that don’t toe its line, cutting off Philippine trade over dubious geographic disputes, closing off its own economy to foreign investment and stealing hundreds of billions of dollars in American intellectual property each year.

The president has pushed back harder on the Chinese and has netted some results. After some Trump swagger, Xi Jinping promised to “significantly lower” Chinese tariffs on imported vehicles.

Again, it’s hard to know how this will turn out, but as The Financial Times’s Jamil Anderlini and my colleague Thomas Friedman have argued, Trump is picking the right fight at the right time.

The third piece of evidence is Iran. I have doubts about the Trump administration’s decision to withdraw from the nuke agreement. But I do know that the argument that many of the Obama people relied on as predicate for the deal is wrong. They argued that, deep down, the Iranian leaders are worldly sophisticates who, if we just gave them the welcome mat, would want to join our community of nations.”

(Note:  “Predicate” is a bit grand here.  “The basis” would be more correct. Mr. Brookes is not alone in overlooking the big beef in the Iranian deal is that we agreed not to inspect any site labeled “military.”  It is well known the Iranians have carried on weapons development in these sites.  That is the problem.  Back at his text:)

“This is the vanity of the educated class going back for centuries. Since we’re obviously so superior, everybody else secretly wants to be like us. It’s wrong. Thugs gotta thug. Religious fanatics gotta fantasize.

The Iranian regime has continued on its merry way, pouring troops into Syria, lobbing missiles at Israel, propping up extremist armies across the Middle East. Maybe Trump is right to intuit that the only right response to a monster is to enclose it. Maybe he’s right that when you sense economic weakness in a potential threat, you hit it again.

Please don’t take this as an endorsement of the Trump foreign policy. I’d feel a lot better if Trump showed some awareness of the complexity of the systems he’s disrupting, and the possibly cataclysmic unintended consequences. But there is some lizard wisdom here. The world is a lot more like the Atlantic City real estate market than the G.R.E.s.”

(Note:  “GRE” is the Graduate Record Exam taken after the Baccalaureate in preparation for grad school and the reference more snobbery from Mr. Brookes.)

Be sure this gave leading Democrats dyspepsia of the literary kind if not the literal kind.  In spite of his “crease” stumble in search of justification for admiring a “black” man, David Brookes and Tom Friedman are the leading men in print for the left, but they confess their elitism and prejudice in every piece.  They have operated for decades under covers of feigned purity, objectivity and conservatism in spite of being hard left and stone phony in every measure.  Nonetheless, they are of value.

The Brooks analysis tells us that something profound is happening and the coming mid-term election is going to be one like none in history.