The Dark Side of American Politics 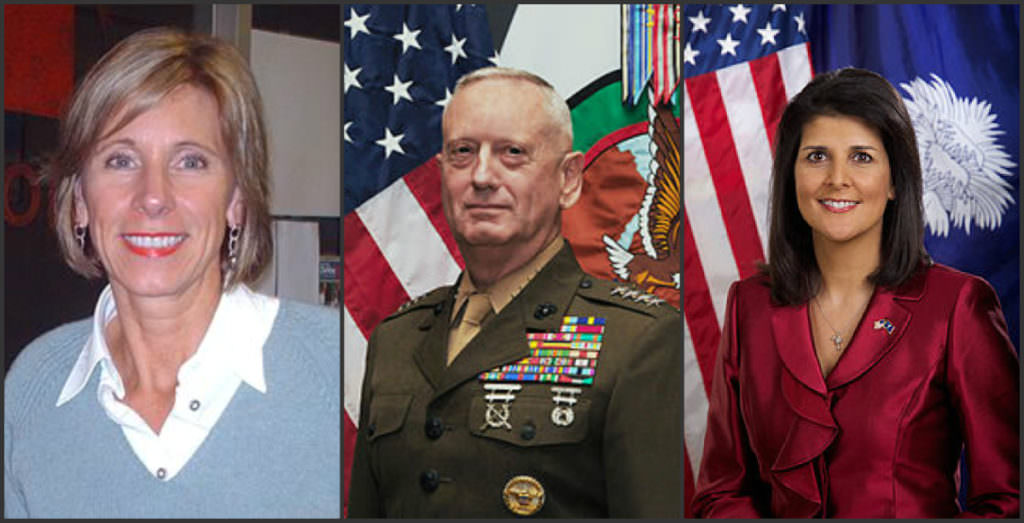 While America is on pins and needles of the next inaugural, Donald is busily putting together a cabinet of what appears to be a “who’s Who” of swamp gators and political insiders.

The 25 percent of American voters that were eligible to vote during elections, who determined this year’s election were hoping for more Hope and Change by Making America Great Again, but what they got was last week’s stale bread and lime juice soup for their hard work, bigoted style rhetoric, and hateful Social Media outburst.

We see a 5.5 billion dollar worth, Devos, of AMWAY fame for local schooling, which is promising anything besides neighborhood control of public schools. Senator Sessions, better known for racist ideas than equality of the law for everyone, Mike Flynn, liberal supporter for the head of the most important security agency in the world, while his assistant is not what any intellect would choose but K.T. McFarland of Fox News.

For White House counsel, Trump announced Donald McGahn, a partner at the firm Jones Day who served as the Trump campaign’s general counsel, for the job. McGahn is a former chairman of the Federal Election Commission. Then we have the one man who single-handily destroyed the RNC, Reince Priebus as Chief of Staff. We see a pattern of less than principled players getting high positions in a Trump cabinet for favors returned of lies propagated, and misinformation spread throughout the candidacy and election of Donald. We even watched Priebus go underhanded and stop the actual disagreement of a majority selection of Trump at the RNC Convention, putting his name and character on the line for a position.

We see the man that is better known for racism, bigotry, and the demise of the once famous Breitbart news, former Breitbart News executive called Steve Bannon, who was Trump’s campaign CEO, will be Trump’s chief White House strategist. While Donald had to fight other “gators” to pull Labor Secretary Elaine Chao to serve as secretary of transportation. Chao served as deputy secretary of transportation under President George H.W. Bush and is married to Senate Majority Leader Mitch McConnell. Americans know the challenges that occurred during day one of the Obama administration will share another misinformation specialist and swamp spouse to the transportation department.

The Secretary of Treasury is an employee of the infamous Goldman Sachs, the evil of Wallstreet during the election spewed constantly by Trump, his cohorts, and followers, Steven Mnuchin, a 17-year-veteran of Goldman Sachs, is Donald’s pick for Treasury secretary. With no real plan to replace Obamacare for the millions who now depend on it, Donald chooses a man who is completely opposed to it, Rep. Tom Price (R-Ga.), the chairman of the House Budget Committee and an early Trump backer, was chosen to lead the Department of Health and Human Services. We see the King of Bankruptcy, Billionaire investor Wilbur Ross, a Trump economic adviser, is Donald’s choice for commerce secretary.

We see a voice of opposition against Trump during the primaries, who was threatened now in a place of prominence, Trump tapped Todd Ricketts, the co-owner of the Chicago Cubs and a member of the powerful conservative Ricketts family, to be deputy secretary of commerce. And finally, as of today, we see a strong-willed powerful military presence with Trump picking retired Marine General James Mattis as his defense secretary.

Is it just the reporter, who are we missing the average middle of the flyover country person being on the cabinet of Donald Trump at this point? What we do see is a lot of very rich millionaires and billionaires, and political career veterans as the top picks. This is not cleaning out the swamp, but the same bankruptcy choices that Trump made in his personal businesses, with what he hopes are people who will “not notice” when conflicts between his personal business, and the government become blurred to no distinction in either. Trump has not offered a staff that will strongly potently bring unity, strength, and a strong budget emphasis to his Whitehouse. We do not need the rich, who are used to tossing away money on inefficient, extravagant, lavish, excessive, imprudent trinkets, now running the country, as the gators and mosquitos of the last 8 years. America was duped, lied to and taken for the latest patsy by an arrogant egomaniac who has schizophrenic tendencies.