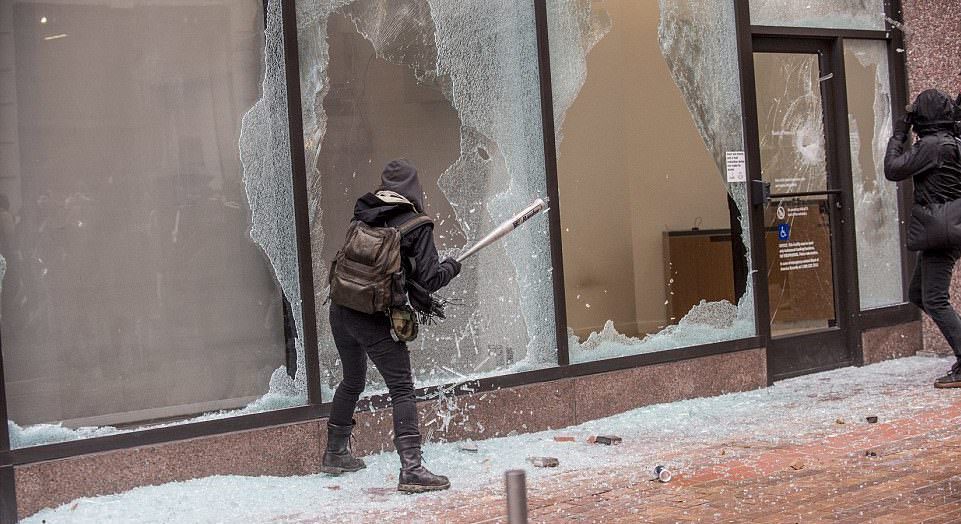 WASHINGTON, D.C. 1/25/17–The days of a gentle slap on the wrist accompanied by whispering, “Naughty Naughty,” are over. There’s a new sheriff in town who takes a different approach to thuggery. Two hundred and thirty of the masked rioters who tried to invade the Inauguration of the new President were arrested, charged with Felony Rioting by the U.S. Attorney and face 10 years in prison along with a $25,000 fine.  At last, justice will be served for political criminal activity.

All welfare benefits should be cancelled for those involved in the riots with the intention of interfering with the constitutional process of electing a president and causing destruction. Every penny of the fine should be paid in full before release, and that sentence should be 10 years of hard labor which is not unreasonable. Justice Department, please take note.

The protesters seem to have plenty of stamina and physical strength to throw things around, swing sledge hammers into store windows to smash them, set cars on fire along with trash bins that they threw into the streets and set ablaze. They also publicly burned the American Flag.  So they are not lacking physical strength to work. These hoodlums should not be collecting welfare or other benefits. They owe US. We owe them nothing. They are perfectly able to work and earn their keep.

It is a new day in America. There is no more coddling criminals, no more ‘political correctness’ but instead, stern punishment for lawlessness and creating havoc.

A Presidential inauguration Ceremony is supposed to be a distinguished event. That is how it was designed. Communist Leader George Soros paid protesters to disrupt this transfer of power in D.C. in an attempt to spoil the most important event in the country. He did not succeed.

These paid imbeciles attacked people trying to get to the inauguration, harassed attendees (actually striking some), set cars on fire, tried to block entrances to the ceremony, and broke store windows. They set a stretch limo on fire and spray painted, “We the People” on the side of the burning limousine. They smashed TV trucks which is strange since the main payoff for these nitwits is television attention. That shows how bright they are.

TV personality Larry King was in his studio doing a program. When he came out he found that all the windows of his SUV had been smashed.

The anarchists were dressed head to toe in black with faces covered so as not to be identifiable, which is illegal. One of the rioters draped himself or herself in a rainbow flag.

Soros not only set up various organizations to carry out these ‘protests,’ but also worked with 50 organizations, mostly sponsoring Muslim organizations, to put together the national women’s march throughout the U.S. the day after the inauguration to make it appear that nobody liked Trump. Not so. Millions upon millions of people love President Trump and are happily relieved that he is now our Commander-in-Chief.

And by the way, the trash these women left strewn in the streets was the worst to ever be seen. They did not have the decency to clean up their mess since they have no decency.

What has NOT been adequately reported is the LOOTING that has become a mainstay of such anti-American events. They kept that quiet so as not to make the looters look bad and cause stereotyping. Store windows were broken as Black Lives Matter participants, as usual, grabbed what they could. They should have their welfare benefits cancelled as well.

This rampage by anti-Americans took place only two blocks from the White House. Six police officers were injured by being hit with rocks thrown at them. It is of interest to know that “Bikers for Trump,” a sturdy looking group was on hand to deal with some of the protesters. The anarchists held back in the presence of the bikers knowing full well that the bikers were ready and more than willing to do serious battle.

A note to President Donald Trump. BRAVO! Yes withdraw all welfare and other government benefits from everyone who took place in those third world style riots. And this should include everyone who is a part of Black Lives Matter,  another creation of Soros.  Begin proceedings to charge George Soros with Treason and Sedition. There is more than enough evidence to show that he is a traitor and it is time to deal with him as such.

His home country Hungary is preparing to take actions against him. Russia would love to get their hands on him and Israel wants him in their hands. He needs to be dealt with and removed from the scene. His enormous wealth can be confiscated to repair the damage he and those he hired have caused not only to America, but countries throughout the world whose economies have been wrecked by Soros as well as currencies around the world being devalued due to his manipulation.

When you think of the recent events, one must ask, where’s the beef? The new President wants America to again be prosperous, our military strengthened in order to protect us from enemies, and better relations with the world and for Christians to not have to hide their faith or Who they worship .He wants better job opportunities for America and for families to live in peace.

He wants to turn Obama’s misrepresented health care plan around and replace that with affordable health care for everyone. He wants to do more for our veterans and military (he just gave military personnel their first raise), actual education for our children, and to carefully vet anyone who wants to come here from other countries. And he will block all efforts to prevent citizens from saying, Merry Christmas during the Holiday season.

So what can be objectionable to this agenda? Absolutely nothing. It is something to be desired for all with the exception of these ignorant misinformed bums who think they will be better under Communism, better known as The New World Order. I have seen what life under Communism is like. Believe me, you do NOT want that. And President Trump believes in the celebration of life for all.

Yes, we have a new sheriff in town and millions of people are backing him and praying for him. We have been ushered, by God, into a new era…a new day.  With God’s help, we have taken back our country. Let us never forget What God has done for us. Christians, be visible.