If the Coup in Turkey was Real… 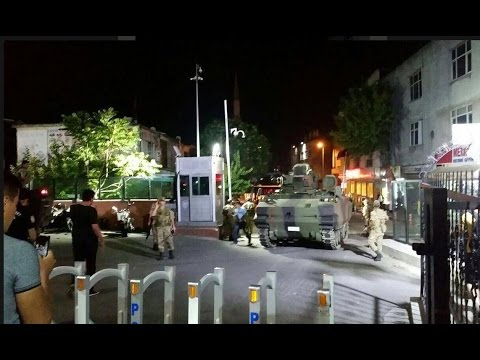 “Izvestia” newspaper published an opinion article by Vladimir Zhirinovsky, Russian controversial politician,  the Deputy Chairman of the State Duma, the founder and Chairman of the Liberal Democratic Party of Russia, about how the Turkish leadership may use the new possibilities opened after the coup.

“I am engaged with Turkey affairs for 52 years” – said Zhirinovsky. “Serving as an officer in the Transcaucasian Military District, I have studied the Turkish army and all the issues related to military coups. Just at that time there was a revolution in 1971, headed by Nihat Erim.

The current upheaval was the fifth. The most bloodless was the fourth coup in 1997, almost twenty years ago. Prime Minister Necmettin Erbakan then left his post and passed the very Welfare Party, which he led, by inheritance to Erdogan. It was so soft coup. The military forced to form another government and tried to eliminate the party. Then in 2002, Erdogan recreates it under a different name. As a rule, after the military coup prohibits all parties, their leaders have no right to lead any political party. Therefore, all the military coups in Turkey were for the benefit of the Turks. To expand democracy, there was a struggle against criminality, corruption. Therefore, from all four coups Turkey had big benefits. And remaining a secular state, Turkey has followed the precepts of Ataturk – the first president of the republic.

In these days, no one is arrested, more than that – they allegedly did not even know Erdogan’s whereabouts. So I do not rule out that this Turkish revolt may be the likeness of the Soviet Union’s coup in August of 1991, when the selfproclaimed State Committee on the State of Emergency started and was quickly stopped, to give an excuse to crack down on the army. Perhaps it was incited coup. In this case, Erdogan once again hit the army. Now under attack were thousands of officers, all generals and some rank and file. He hit the supporters of Gülen, who is in exile in Pennsylvania. They used to be friends, but diverged.

Gülen, of course, maintains ties with his supporters. They are everywhere – in the ministries, in the army and among the intelligentsia. It’s a pure wrestling between factions – Erdogan’s and Gulen’s groups. Since Gülen in exile, Erdogan took over all the reins. He became a president by removing Abdullah Gul. Removed Ahmet Davutoglu, a former prime minister – put the “right person” – Binali Yildirim.

The real coup worldwide is bloody. In any case, the leaders of the state are immediately arrested. Since they did not arrest the leader, and officials were taken only under house arrest, and somewhere they found the hidden army chief of staff, it is suspicious. All previous military coups in Turkey were led by the Chief of General Staff. Why? He gives an order to all the troops to act in support of the military government. And in this case military chief of staff by himself is alleged coup opponent.

Of course, he can really be Erdogan’s man, but the conspirators, if they wanted to win, had to destroy Erdogan, Yildirim and chief of staff. They had to destroy all of the top echelon of power, who has refused to support them.

Therefore, such a strange revolution raises the suspicion that it all was a provocation, an incitement.

Remember, how it was with the German pilot Rust. His plane could be brought down immediately, as soon as he crossed the border. But the permission to shoot down the plane was not given; it had to land at the Red Square. After that, Gorbachev removed the entire top brass of the Soviet Army. I think this last Turkey coup is of the same series.

Remove all who do not agree with Erdogan and get emergency powers, full authority. He wants to turn Turkey from a parliamentary republic to a presidential and have all the power. Maybe they will not even have a Prime Minister. And they will change the constitution and restore the death penalty and will come to the presidential regime. It is like Saddam Hussein or Muammar Gaddafi. Erdogan likes when all subordinate only to him and he can do as he sees fit.

Therefore, in the coming months we will see many changes. Arrests and trials will continue. If the parliament amend the constitution and lift the ban on the death penalty, they also will begin executions. In any case, Erdogan will try to subordinate the army to him.

But there is one dangerous moment. The more officers will be executed or sentenced to long terms or for life, the faster the army will rise again, but it will be a very bloody coup. And it will start with the seizure and destruction of the president and prime minister.

Erdogan has repeatedly conducted cleansing of the armed forces. Many officers are still in prison. And they have relatives. Many of them are graduates of the same military colleges and academies. And now, some are in jail, and the others – seems to be on the loose. And those who remain at large, will think – who’s next if Erdogan again wants to purge the army.

So I do not exclude the possibility of another revolt, and it will happen very soon – as early as this year or next. And that would be a real coup, when the military government will be formed and all the civilians in high places will be arrested, the constitution will be changed, the secular character of the state will be returned, and Islamization stopped. The military will hold a number of other reforms.

Erdogan will be hard to remain at power because this unsuccessful coup attempt will make army angry. Military wants to win, but at the same time they suffer another defeat. It has already been defeated, when Erdogan began a purge of the army.

So now, a quiet life in Turkey is questionable.