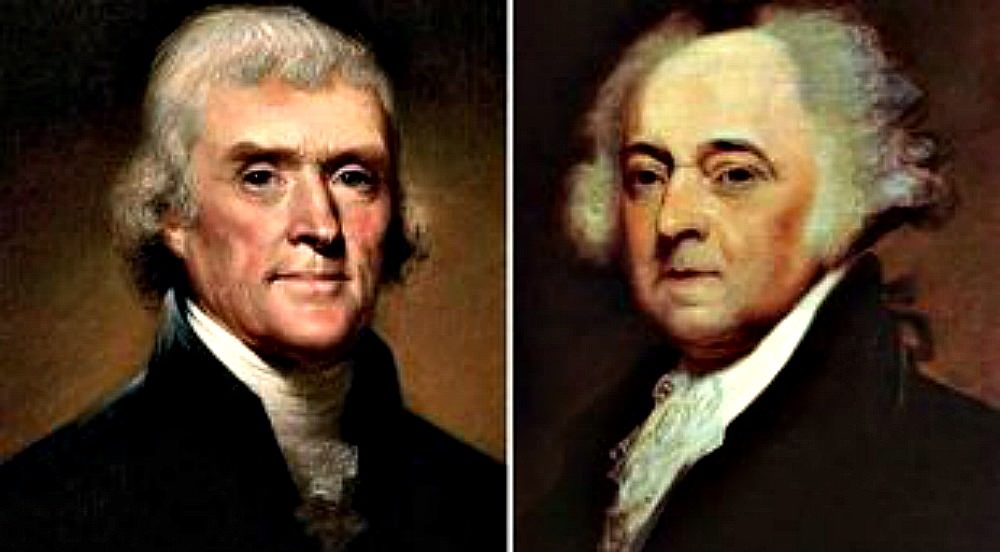 Last week on the Doc Owen Show we discussed a little about Contested or Unusual Presidential elections.  There was little time to get across all the information, so we thought we would put this research into several articles.  Below is Part 1 of a series of 6 posts.  We hope you find this information useful.

The first election we will cover is the election of 1800, sometimes called the Prelude to a Duel.

At that time political parties were beginning to form, an unfortunate situation for our Nation when you consider how the dominant political parties are acting today.  George Washington did not run as part of a political party.  He was a trend setter we should have followed.  He also set the precedent of serving two terms.  Honor and virtuosity were characteristics of his leadership.

The Federalist Papers warns us against forming factions.  Alexander Hamilton wrote in Federalist 10, not that factions should necessarily be avoided but the outcome of faction should be controlled.

Nevertheless, we soon did form Political Parties.  And the two major parties today are not doing a great job of protecting our Republic.

In the election of 1800, two political parties were involved. One, the Federalist Party, founded by Alexander Hamilton, the other the Democratic-Republican party led by Thomas Jefferson.

The contenders in this election were the Federalists John Adams and Charles Pinckney, and the Democratic-Republicans, Thomas Jefferson and Aaron Burr.

Thomas Jefferson wanted Aaron Burr to be his Vice President, which he did eventually get.  However, the electoral college at the time was setup differently than today.  Each elector had 2 votes each for President. Whoever had the most votes would become President and the runner up would become Vice President.

At that time the number of electoral votes required to become President was 70 of the total 138.  Two candidates got more than 70 votes.  In fact Thomas Jefferson had 73 votes. Enough to win the presidency, but so did Aaron Burr.

It became a bitter match between the pro-French and pro-decentralization Democratic-Republicans under Jefferson and Aaron Burr, against incumbent John Adams and Charles Pinckney’s pro-British and pro-centralization Federalists.  Neither of the two Federalist received enough votes to win.  Adams had 65 votes and Pinckney had 64.

Because of the tie, the matter was referred to the House of Representatives.  There was much behind the scenes negotiating especially involving Alexander Hamilton the founder of the Federalist Party and the Nations first secretary of Treasury.  The House didn’t easily arrive at its decision.   It took 35 ballots in a week before finally voting to name Jefferson the victor and Burr the Vice President on February 7, 1801.

Hamilton and Jefferson despised each other, but Hamilton considered him a safer choice than Burr, whom he claimed “loves nothing but himself—thinks of nothing but his own aggrandizement.”

In a duel three years later while he was still Vice President, Burr shot and killed Alexander Hamilton.

The election of 1824 was a first for the newly formed party called the Democratic Party.  Its leader was Andrew Jackson, a war hero and a Senator from Tennessee.

Opposing him was John Q. Adams, son of the former President.  He ran on the Democratic-Republican party.  Also running on that party was William Crawford who had served as Secretary of War and also as Secretary of the Treasury.

The fourth person running was a Whig named Henry Clay.  Clay served in the House and the Senate and was widely known for his cunning.

Jackson ran on the mindset that it was his turn.  However no candidate received enough electoral votes to be named President.

Adams sought the support of Clay.  Clay had received only 31 votes but his influence worked well as he threw his support to Adams.  The result of this alliance brought victory to John Q. Adams in the House.  Clay had won over the western states where Jackson had his strongest support.

Jackson, who had received the most electoral votes at 99 and the highest percentage of the popular vote, was furious and called the Adams/Clay alliance corrupt.  This was the first of five elections where the winner of the popular vote did not become President.

Jackson was right to be furious as Adams had promised Clay the position of Secretary of State.  He called it a “corrupt bargain” and spent the next four years campaigning for the 1828 election highlighting the unfairness of the 1824 election.  He never accepted his loss to Adams.  Jackson went on to win the 1828 election naming himself as a man of the people, not the government.  A mantra that today’s Democratic party still uses.

Some other peculiarities concerning the number of Electoral votes were obvious.  For example, even though there were more voters in Indiana than Virginia, it had only 5 votes whereas Virginia carried 24 votes.  Also Ohio where as many as three times the number of votes were cast only got 16 votes.