Does the Constitution Want to Establish a Theocracy? 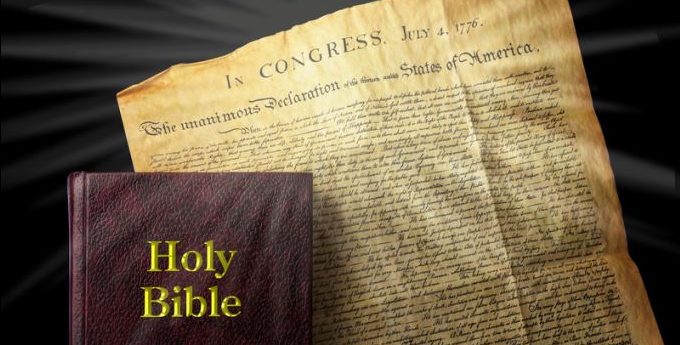 A question, and sometimes accusation, that we in the Constitution Party are often confronted with is whether the party wants to establish a theocracy. The answer to the question depends on whose definition of “theocracy” you’re using.

The word theocracy originates from the Greek θεοκρατία meaning, “the rule of God.” So, if you’re asking whether the Constitution Party wants our nation to be subject to the rule of God, then the answer is “yes.” As in the pledge of allegiance, we want to be one nation “under God,” not a nation out from under God, or a nation in rebellion against God, but a nation in submission under the Creator and His revealed will for the governing of the civil societies of His creation, which will includes the restraining of evil, preservation of the moral order, justice, and the protection of individual, God-given rights.

However, when people accuse the Constitution Party of wanting to establish a theocracy, most of the time they are talking about the idea of the organized church directly running the institutions of civil government, or government passing laws that require specific religious practice or observance. If this is your definition of a theocracy, then the Constitution Party strongly opposes it.

In this regard, the Constitution Party most certainly does acknowledge the Creator God of the Bible and further acknowledges His rightful authority to prescribe the proper role of civil government and the just standards for the governance of the civil society.

Some people oppose the idea of civil government prescribing any moral code at all. However, every government must govern according to some moral code. To say that murder, robbery, or anything else is wrong is a moral judgment. The only way not to impose a moral code would be to choose anarchy and the law of the jungle.

If you don’t want anarchy, then you do want government; and you do want that government to govern by a moral code, so it’s just a question of which code? Will it be the moral code of a single dictator that lops off heads at will? Or will it be the moral code of pure democracy that lops off heads at the whim of the masses? Might it be the code of Islam and Sharia law that lops off the heads of some and makes slaves of others? Or how about the moral code of secular humanism and socialism rooted in evolutionary belief? Today that system calls any views critical of Jews forbidden hate speech, but about 80 years ago it allowed for the Nazi genocide of Jews because that code has no fixed standard and is constantly subject to change.

There are many moral codes out there, but, as for me and the Constitution Party, we choose the moral code of Biblical Christianity which protects both the God-given rights of individuals and the moral fabric of society with a fixed and dependable standard. If you’re wondering how that translates into political policy, please read the Constitution Party platform here.

While the Constitution Party does not want the Pope, the Southern Baptist Convention, or any other religious entity running the country and making its laws, we do seek the election to all public offices of citizen legislators who understand – and abide by! – the principles and precepts prescribed by a just and loving Creator who desires moral and lawful institutions of civil government that will secure for the people and their posterity, “The Blessings of Liberty.”