The Constitution Party Candidate for President Makes His Case 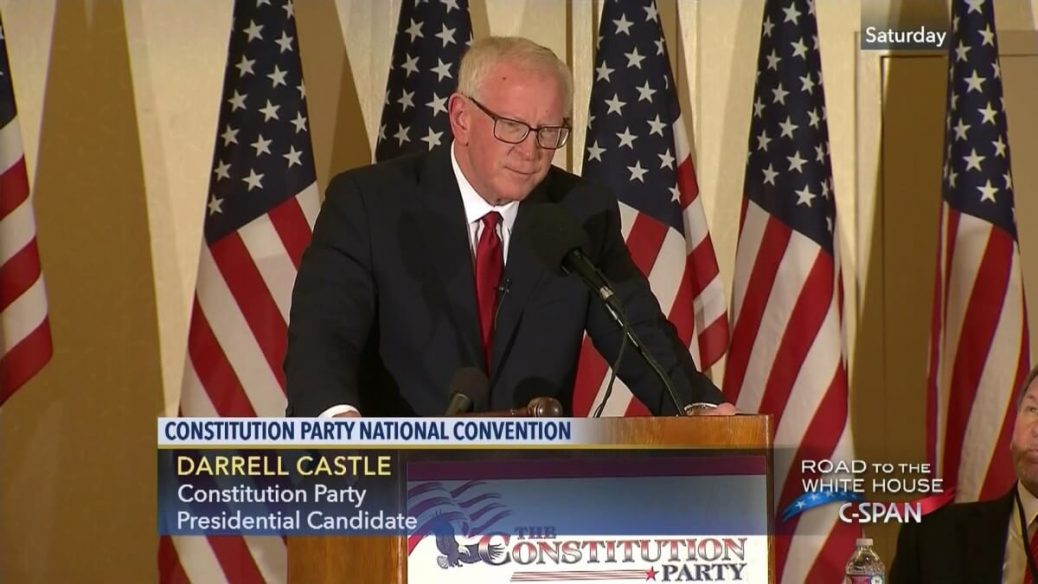 Third parties in the American political scene have had little impact in national elections during the past 100 years. Ross Perot in 1992 had a minor run, and prior to that Teddy Roosevelt ran an unsuccessful Presidential campaign as a “Bull Moose” candidate back in 1912.

Today there are several third parties, one of which isthe Constitution Party. The CP originated in 1992 as the US Taxpayers Party and changed to its current name in 1999. They have less than 80,000 official members and are currently only on 19 state ballots. The party is considered by many, including most within the party, as a “far-right,” traditional political party. It is strongly Judeo-Christian based, and some of its platform causes ripples with many in the Democrat AND Republican parties. One example is the CP stance on abortion. It is staunchly pro-life, even in cases of rape or incest. (Writer’s note- while that may seem extreme to some, it is relevant to add that the Roman Catholic Church has the same exact opinion on the matter. The RCC is the largest denomination in the United States.)

Recently the Constitution Party nominated long-time party favorite Darrell Castle, Esq. as their Presidential candidate for 2016. Mr. Castle has run his own law practice for decades in Tennessee, and is a Vietnam War veteran, serving with the U.S. Marines.

Eagle Rising was able to ask Castle several questions about his political aspirations, and the direction of the country.

ER: It is likely that the 2 mainstream candidates will be Trump and Clinton.  In your opinion, who would be worse and more dangerous for America as President?

Hillary Clinton is far worse than Donald Trump.  She is the favorite establishment neocon and is more likely than any other to provoke World War III.  If that’s not enough, she has 147 FBI agents investigating her for possible crimes allegedly committed while she was Secretary of State.

ER: Many will claim that a vote for you in November could hand the election to Hillary, in a close State race.  What is your answer and defense to this allegation?

If you think things are fine and you’re happy with the way things are going just keep those Republicans and Democrats — you are guaranteed to be happy.  If not, then it is time for a change.

ER: In your first 100 days in office, if you did win the election, what are the first 3-4 items on your agenda?

ER: Do you believe that Trump will jump ship and seek the Presidency via a 3rd Party, if he does not receive the Republican nomination?  Why?  If so, what Party potentially?

No, I do not believe that he will do that for at least two reasons.  1) He just used that threat as leverage to keep Republicans from cheating him as they did Ron Paul. He does not want to be a pariah.  2) Practically speaking, it would be impossible to obtain access to all 50 ballots in time unless he got the Libertarian nomination and they are for open borders…so I don’t think so.

ER: Sanders talks a lot about it, but in your mind- what exactly is a democratic socialist?

A democratic socialist is a person who wants the government to own the means of production, to allocate that production and to take from producers by force and redistribute to more favored groups.  The Democratic part is that we vote to decide who gets to be in charge of the armed robbery.

ER: What are a couple CP platforms/ principles that were once part of the Republican platform- but no longer?

ER: Some people, including Republicans, have a large problem with the CP stance on abortion.  Why do you believe that you are in the right?

The right to life comes from God.  Governments are instituted among men to protect the God given right of life, liberty and property.  The 5th and 14th Amendments both say “No person may be deprived of life, liberty, or property without due process of law.  That is very inconvenient for Republicans.

ER: In a perfect world, 5 years from now, what actions do you desire to see the United States federal government accomplish?

ER: Will the United States in 25 years resemble the USA from 25 years ago?  If we continue on our trajectory, what are your thoughts?

No, the United States 25 years from now will have a much lower standard of living.  There will be two classes of people – extremely rich and poor.  We will all be blended into one polyglot soup of humanity with one world money, world taxation and world government.  We will all love our slavery as today’s freedom lovers die off.