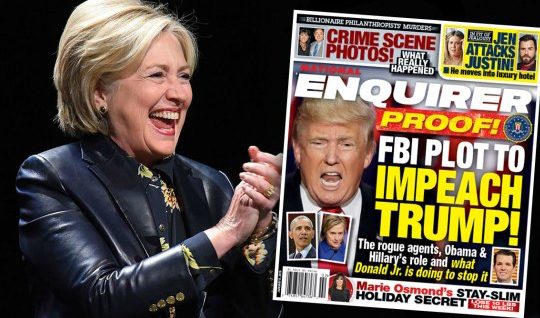 Release the Memo: While Democrat’s Russian collusion story has fallen apart, and they are trying to spin straw into gold with obstruction charges of a non-existent crime, the true conspiracy of Democrats inside the Deep State is being revealed that includes the worst crime in government history.  The memo everyone is demanding be released is just a synopsis of the crimes of Democrats in the DoJ, FBI, and the Obama White House that makes Watergate look like an elementary school prank.  Democrats try to mock it, damn it, and deny it, but the truth will set you free of them.

The question is not did Republicans cheat in the election.  It is to what degree Democrats are cheating in politics from the voting booth to the White House.  Democrats constantly accuse Republicans of doing damage to Americans to seize power.  As we know from honor among thieves it is always the thief who accuses honest people of being thieves because they know that’s what they would be doing.  Democrats have sabotaged America to subvert Republicans and promote themselves in the eyes of the ignorant and blame Republicans for the damage that Democrats do.  The degree to which this is being done goes much deeper than Hillary giving Bernie the shaft in the primaries.

Millennials are so twisted against Trump, only because they’ve been fooled by the phony conservative NeverTrumpers and the lying liberal media, so they want someone else in 2020.  This is proof of how Hitler’s Big Lie in action works, though it was actually invented by Woodrow Wilson and copied by Joseph Goebbels!  Who do they want instead and why?  Any Republican will be mercilessly smeared and slandered by the Democrat media.  Saying you want someone who is not controversial is fantasy because even Jesus Christ is slandered by the Left.  A look backwards at the last fifty years reveals the depth of Democrats subversion in America.

Democrats sabotaging America so they could dupe the ignorant masses into giving them power goes back to the beginning of the nation when their desire to have a king rather than a president was defeated by the nobler of the Founding Fathers.  Democrats became the Federalists that later became the Democratic Party while Republicans began as the Democratic-Republicans, the Whigs, and then Republicans.  That all leads up to today and the greatest scandal in American history.

Before the election Democrats admitted it was not possible for Russia to influence or alter the outcome of the election.  Afterwards they have made it the centerpiece of their campaign to undo the election of Trump.  Now it is coming to light that Mueller has been doing nothing more than conducting a witch hunt by which to punish Trump supporters and smear the president.  His shift from collusion to an obstruction investigation of a non-existent crime is testament to his duplicity.  The charges against Flynn and Manafort have nothing to do with collusion or impropriety on the part of Trump much to the embarrassment of fools like Joy Behar.  Does anyone even know what lie Flynn supposedly told the FBI?  But even in obstruction they have nothing on Trump.  They make the false claim that firing Comey and almost firing Mueller constitutes obstruction when they are his right and perfectly justified considering their violations of the Constitution in the Hillary and Russia investigations.  Comey testified that Trump was not under investigation, but the phony FISA warrants Obama got to spy on him prove otherwise.  None of this is hard to believe in light of the fact that the Left’s greatest military heroes of the last ten years are people like Manning and Bergdahl, both traitors who were freed by Obamaites.

Release the Memo has Democrats in a panic

Democrats saying Trump is in a panic over the investigation are just expressing their wish list.  Saying Trump has no concern for security when they have applauded Manning for violating National Security is laughable.  It does not violate national security to expose the Democrat cabal operating undercover in the U.S. bureaucracy sabotaging at lower levels when Democrats have been doing it from Congress.  But President Trump is so in command that he is playing them like a virtuoso and causing them to make one strategic mistake after another.  This is more than just a theory.  This is exposing the truth of actual Democrat subversion and it’s just the tip of the iceberg.  Pray that President Trump recognizes that this theory has teeth and that he gives it fangs.

How deep is the Deep State?