Confirmed: 5 Bombs in New York and New Jersey on Saturday, Liberals say No Sign of Terrorism 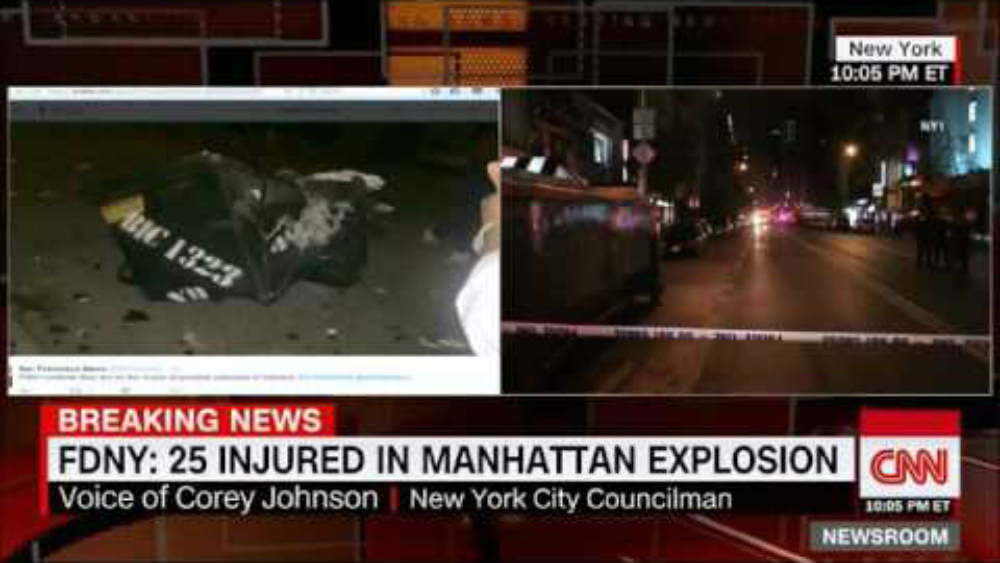 On Saturday 5 different bombs were found by authorities in New York City and in New Jersey. Fortunately, only two of the devices exploded and while some 30 people were hurt, no one was seriously injured or killed.

In Seaside Park, New Jersey an IED exploded in a trashcan Saturday morning just before a 5k fun run was supposed to begin. In a sweep of the surrounding area authorities then found two more, unexploded devices which they were able to recover and destroy without further damage.

Three pipe-bomb-type devices wired together were found near the boardwalk in Seaside Park. No injuries were reported and a four-block area was evacuated for most of the day, authorities said.
An initial examination showed the devices were rudimentary, with some type of timer, and only one of them detonated, two federal law enforcement officials told CNN…

“If it was just a matter of minutes, in terms of difference, there would have been a good number of people running past that explosive device” because of its location along the race route, Della Fave said.
Registration problems at the starting line delayed the start of the race, which meant no one was near the garbage can when the explosion happened, a law enforcement official said.
“We were lucky,” the official said.

Then much later in the day another explosion rocked New York City injuring 29 people and leading authorities to discover yet another unexploded bomb.

The blast appeared to originate from a construction toolbox in front of a building at around 8:30 p.m., a law enforcement official told The Associated Press. A garbage can was found mangled nearby.
Less than three hours after the explosion, investigators located a pressure cooker inside a plastic bag at West 27th Street that was attached to wiring and a cellphone, a law enforcement source told Fox News. It was not clear what was inside the device. Police advised residents of the block where the pressure cooker was found to stay away from windows facing 27th Street.
Cuomo said the device on 23rd street and the device on 27th street were “both similar in design.”

Despite the closely clustered collection of improvised explosive devices (IED) and the similarity in the styles of those bombs, liberal politicians in New Jersey, New York, and D.C. are arguing that there is “no evidence” that the bombs are linked to terrorists. New York Governor Andrew Cuomo (D-NY) took great pains to point this out telling the media that there was “No evidence of an international terrorism connection with this incident, but it is very, very early in the investigation, and it’s just starting.”

Perhaps Cuomo is right, but it seems odd to make such a pronouncement on the same day that authorities find 5 different bombs in the greater New York City area.

But this seems to be exactly the kind of reaction liberals usually have whenever there is any hint of terrorist activity during an election cycle. It’s odd how hard the Democrats work to ignore terrorism, even as it comes looking for them.