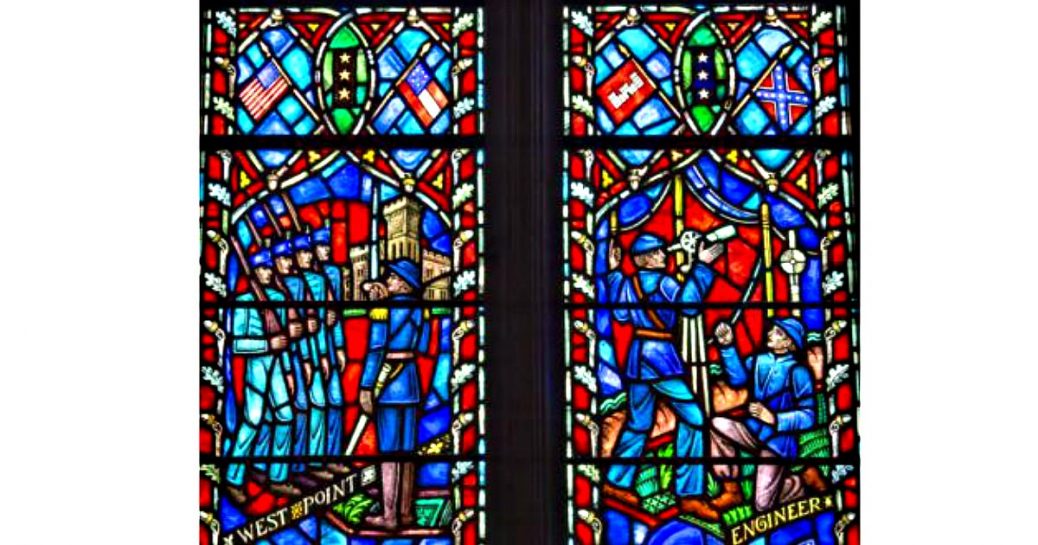 In 1953, was it really wrong to commemorate Gen. Robert E. Lee in the stained glass of Washington, D.C.’s National Cathedral? For context, a typical statement from this post-war unifier from March 15, 1866:

“We shall have to be patient, and suffer for awhile at least; and all controversy, I think, will only serve to prolong angry and bitter feelings and postpone the period when reason and charity may resume their sway.”

Politically correct progressives, it seems, are in a cultural jihad with his ghost. A modern-day McCarthyism-style fervor to annihilate the famous figures populating their own Confederate history. It’s analogous to a real-life “Fahrenheit 451”: tearing down statues of their forebearers instead of burning books. However, the goal to eradicate threatening ideas—both sets of objects represent—is identical. Unfortunately, Democrats’ demented dogma has recently shuttered the windows of a national religious landmark.

Last Tuesday evening—after a two-year debate—the cathedral’s governing board voted to remove two 4-by-6 foot stain glass panels. Related to church windows, what do parishioners typically see other than emanations of color and beautiful designs? Still, the fact that they depict two important Confederate generals, Lee and Gen. Thomas “Stonewall” Jackson, now means they must be purged. Per Church officials, this sudden “eyesore” is “a barrier to our important work on racial justice and racial reconciliation.” A convenient excuse of the self-righteous to perpetrate retribution against demonized, and defenseless, targets. Flawed as they may have been, weren’t these American soldiers also Christians? Thus, to utilize Scripture as a guide:

“Then Peter came to Jesus and asked, ‘Lord, how many times shall I forgive my brother [Confederates] who sins against me? Up to seven times?’ Jesus answered, ‘I tell you, not just seven times, but seventy-seven times!’” (Matthew 18:21-2)

As their religion’s prime directive is forgiveness, why have these church elders sown dissension instead?

Hence, their brief deconsecration service that followed Thursday was a farce. A hypocritical effort to mask scorn via a “respectful” ritual toward disparaged subjects. Yet, liberals’ self-serving perpetuation of an ancient grievance has no relevance, for example, to Lee’s post-war actions. In this matter, their ire is a bizarre and destructive (often violently expressed) mind-set. Thus, as the acknowledged face of the Confederacy, Gen. Lee is a scapegoat for Democrats’ own existential crisis of conscience. In short, they use his image to inflame today’s political landscape. Their groundless accusations—as their unfounded rage—have no bearing on him, then as now.

Neither do their baseless claims of his influence have any connection to race relations in America of 2017. Our widespread celebration of diversity—as demonstrated by commonplace interracial marriage—is a case in point. Those needing a more blatant example of societal evolution need only consider the last occupant of the Oval Office. What greater honor can be bestowed upon anyone to represent all Americans then electing that person to helm the country?

Speaking of obvious truths, the Cathedral Chapter’s unfortunate determination is actually an insult to the gift, and the legacy, of the completely blameless United Daughters of the Confederacy (and a private benefactor). After all, they raised the funds and donated the windows to the church. Thus, for 64 years the Daughters’ intention was to honor the past, not justify its mistakes. This fact was even acknowledged by religious progressive Gary Hall, the former dean of the cathedral, who stated in 2015 that the prominently placed panels signified a desire to “foster reconciliation between parts of the nation that had been divided by the Civil War.” Historically, that means the Confederacy’s descendants commissioned the windows as an act of contrition: to promote unity, and healing. In other words, precisely what Lee did during the Reconstruction Era. Therefore, what reflective message could be more appropriate in a hallowed space than that one? To the well-informed, removing the windows only abets ignorance of the past. Quite an “enlightened” decision in this topsy-turvy political climate!

Tragically such visual beauty has also become a Rorschach test for polarizing partisans in the MSM. For example, The Washington Post’s Colbert King misconstrued:

“The solemn truth was inescapable: The windows honored a system that rested upon black subjugation and white supremacy. They were a stain on the cathedral and were, as the chapter’s removal resolution stated, ‘inconsistent with [the church’s] current mission to serve as a house of prayer for all people’. … They had to go.”

Interestingly, this columnist’s spouse, Gwen, is a member of the Cathedral Chapter. She voted to strip the nave of these “offensive” artifacts, too. Given the Kings’ collective advocacy of vanquishing the National Cathedral’s “silent symbols of a bloody war fought to uphold a traitorous Confederacy rooted in slavery,” perhaps they should complain about the open display of crucifixes next? After all, didn’t the Ku Klux Klan (read: the militant arm of Southern Democrats) habitually burn crosses to terrorize minorities? Aren’t these archaic instruments of Roman torture as off-putting to the delicate sensibilities of their flock as their newly condemned windows?

As followers of Christ, what would Jesus do?