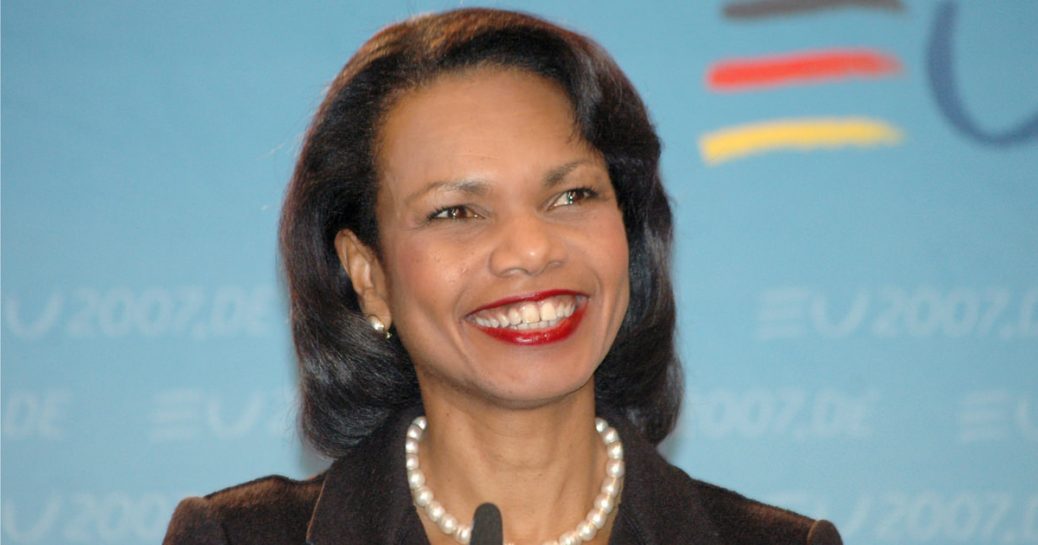 As some may recall, on Oct 8, 2016 Jennifer Smith published a peace “Enough! – Condoleezza Rice joins list of outraged Republicans calling for Trump to drop out of presidential race.”

… Former Secretary of State Condoleezza Rice joined an expanding list of outraged GOP figures calling for Donald Trump’s withdrawal from the presidential race. The politician furiously took to Facebook on Saturday to insist that he withdraw his bid for the White House, fuming: “Enough! Donald Trump should not be President … He should withdraw. As a Republican, I hope to support someone who has the dignity and stature to run for the highest office in the greatest democracy on earth,” Rice said after the infamous tape was exposed …

Five months later it looks like the dignity and stature to lead this country was not the prime reason for Donald Trump to be elected. There are more important things causing the uproar of the deplorables and the silent majority. Can you imagine a professional politician-shirke rolling up his (or her!) sleeves to drain the D.C. stinky swamp? Unimaginable!

And here we go: by J. B., World News Politics
“The United States is in uncharted territory with President Trump, a man with no experience in public service,” – said Condoleezza Rice when recently she came forward and has finally broken her silence regarding President Trump.

She has said a few things in the past about his excellent cabinet picks. Rice particularly was happy of Jeff Sessions as AG.

“Government under the Trump administration will look and feel different,” Rice added. “I think we have to give this Trump presidency some time. It will take the president himself time to realize the limitations of his power, … because he’s accustomed to a different domain … Americans, are a notoriously ungovernable people.”

She also elaborated on the extraordinary american system of checks and balances, which is the greatest system ever invented. But the changes happen slowly and Trump can be forgiven for being frustrated because he used to work at a different pace and he “never even sniffed government.”

Rice added that she understands “his enthusiasm for direct communication via Twitter with the people who elected him – He believes the American people wanted him to go in and turn over tables.” And still “… the tempestuousness or tendency to want to comment on everything, he’s got to dial that back. When you’re president of the United States, you’ve got to think before you speak.”

“Let’s be honest about this. The good thing about democracy is when disaffected people find channels to press for change … And there was a huge disaffected population who felt that globalization had not served them well, that they’d been left behind. We have to look deep into our national psyche and not just ignore the factors that produced this outcome … If we can do that, we will have used this lesson well.”

Former Secretary of State Condoleezza Rice was talking Thursday at the University of San Francisco, before 500 students and faculty of the Jesuit school, who were invited to submit questions in advance.

Currently a professor at the Stanford Graduate School of Business, Condoleezza Rice was appointed secretary of state by President George W. Bush, becoming the first black woman to hold that position.