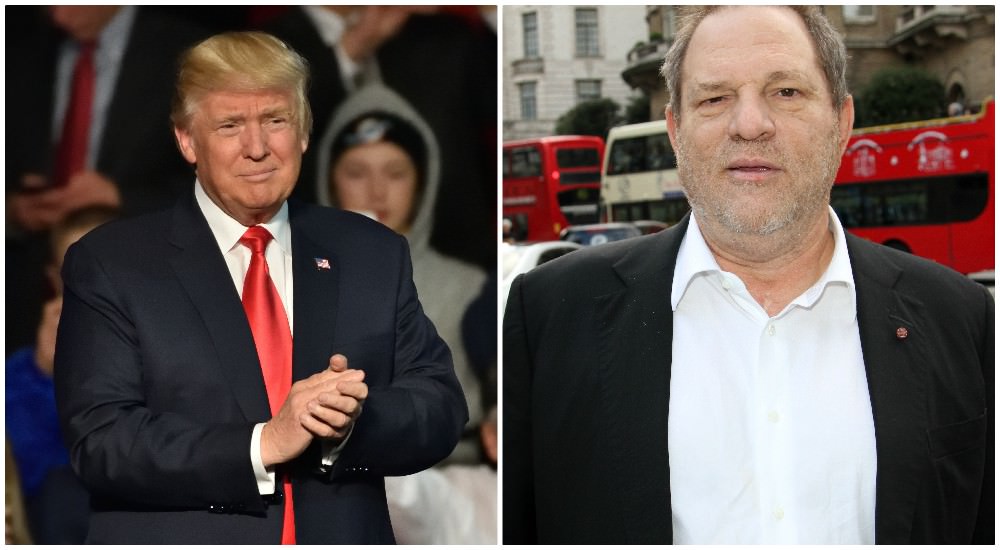 Hillary says Trump is a sexist pig but Harvey Weinstein is a noble man who loves women.  These are the lies of leftist extremism.  There is no difference between lust and rape to a liberal.

Donald Trump’s Access Hollywood expressions of lust for women is equated in the minds of liberals to be the same as Harvey Weinstein’s career of molesting and raping women who want careers as actresses.  Likewise, liberals will curse women who sell their bodies to men for pleasure, but praise those actresses who sell their bodies to Democrat serial rapists for a job.

What is worse is that those women who condemn all men as rapists give radical leftist men like Weinstein their love and prayers.  The two-faces of liberalism are due to the cognitive dissonance and lack of a moral compass in the minds and hearts of liberals.

A Lesson on Liberalism

A liberal asks, “How are Weinstein’s actions different from Trump’s ‘Access Hollywood’ tape?”

What is the difference between lust and rape?  Both are sins, but only one is a crime.  This is the disconnect between liberal’s hearts and minds.  They understand right and wrong in words, but not in deeds.  Just like NFL owners do not understand the difference between protesting police brutality (a façade to advocate for criminals rights) and protesting America.  Do they think the people are stupid?  They believe they must appease their America-hating racist players and spit on the fans.  Do they not understand that the fans pay for their tickets and that players just suck up that money to be entertainers playing a game?  Do they not know that there are many more players out there who would love to take their places, but once you lose the fans you’ve lost your revenue?  Leftists suffer a complete disconnect of cognitive dissonance between the truth of the actions and the lies of their words.  They believe people cannot see through them and notice the humongous noses growing on their faces.

How many disconnects are there between liberal morality and reality?

Three centuries ago European technological superiority put an end to Moslem conquest for three centuries.  Now they have a new technique thanks to their oil wealth of funding terrorism, propaganda, and colonization.  Islam is the ultimate socialist ideology in which all the people are forced to brainwash themselves to be slaves to the state.  Liberal dissonance extends to demanding strict gun control with extensive background checks for Americans, but no vetting at all of Moslems claiming to be refugees.

How Islam conquers and what happens when they do

The immorality of leftism is founded in liberalism, Islamism, socialism, and all their totalitarian subgroups.  They promote criminals as victims of society.  They endorse taking revenge against innocent people as justified redress to any grievance.  They pretend to be the oppressed as justification for their oppression.  Leftism isn’t founded in morality, but in deception.  Liberals promote forcing others to give charity, invite invaders to live in their homes, and advocate stealing from the rich as righteous.  They put out ads claiming that tax cuts for the rich must be paid for by the middle class rather than government spend less.  They have built a mountain of debt and justify their theft of America’s wealth as necessary to save the world from American energy.  These are not Americans, good Christians, or loving patriots.  They are the modern Democrat Nazi Communist Party dedicated to remaking America into their banana republic totalitarian toilet with which to flush away liberty.  Trump is the first leader since Ronaldus Magnus to stand against them and strive to drain the swamp of liberal Democrats and their RINO allies.  As such he is the target of all of their hate, propaganda, slanders, and smears.  Pray that Americans become educated and enlightened or America will be facing its last hurrah in her final days before the world descends once more into the darkness of leftist ideologues.

The damnation of the Left is due to their own two-faced philosophy.  They claim to be the arbiters of virtue, but when it comes to the righteous they are damned if they do and damned if they don’t.  The worst Christian is superior to the best heathen by definition and they hate the righteous because of this and smear them as a matter of course.  In their standard modus operandi they mock VP Pence for not dining alone with women who are not his wife, but would gladly curse him as an adulterer if he did.  The Left scorns women who sell their bodies for money, but laud those who sell their souls for fame and wealth.

Forgiveness is not in their lexicon.  They will excuse Harvey for his crimes against women, but they will never forgive Trump for his crude speech.  As usual they blame their victims and justify their perpetrators.  Sexual abuse is always blamed by leftists on men’s lust unless he’s one of their own.  Of all the most insane leftist liberal rants was one from a women’s close designer who condemned women who wear her provocative clothing as “asking for it.”  This is the justification of leftists, rapists, and Islamists who condone rape of women who do not submit to their demands.  The heart of leftism is the heart of deceit of self as well as others.  There are stories in history of women whose husbands were murdered by terrorists whom they befriended and even fell in love with afterwards.  This is not love and forgiveness when they submit to the murderers, but treachery.  Had the terrorists gone to them to beg forgiveness they could have been a stories of redemption, but they are instead stories of betrayal.  Leftists insisting unrepentant criminals are victims rather than perpetrators urging they not be punished but released is the reason why crime has increased exponentially since the 1950s.

In leftist culture there are no patriots, only tyrants and rebels, oppressors and thieves.  Leftist culture is totalitarian dictatorship in which the king owns everything and everyone must obey his laws or suffer the consequences.  In rightist culture there are leaders, patriots, and criminals.  The criminals are always trying to subvert the righteous, to steal, to corrupt because it is in their nature to take rather than work to make.  They pervert the narrative, and even the language, to suit their corruption.  21st century American liberals are communist socialists, not the same as the republican Christians who were 19th century liberals.  They co-opt the language in order to subvert the righteous and infiltrate their ranks to corrupt their culture.  Americans are free to own guns, but leftists need a people to be unarmed in order to dominate them.  So they let criminals run wild and blame the gun.  Guns don’t kill people; criminals, terrorists, and psychotics do.  Socialism, Islam, and the global warming fraud encompass all of the ideology of leftism.  They want all people to serve the government, be subservient, and surrender their welfare to the government.  To that effect they promote their propaganda as news and righteous truth as fake news to which President Trump stands in monolithic opposition to every lie the Left tells and declares it to be the fake news media.  He does not lay down for them as Republicans have done, but leads as Ronald Reagan and Newt Gingrich have to beat back the forces of darkness by shining the light on leftist lies.

There are always three options in every choice, two sides to every story, but only one immutable truth.

The Liberal Code of Conduct