Coal Miners Finally Wake Up – Turn Against the Clintons and the Democrat Party!

Appearances suggest the divorce is near final. Coal miners with their families and economically impacted townspeople around the state of West Virginia have finally come to their senses. Hillary and the Democratic party abused them, beat them, regulated their livelihood industry nearly out of existence, claimed they didn’t intend to hurt them, and intimated they would be nicer to them in the future. The battered husbands, this time, and the townspeople quite in unison sang, “Don’t come back. No more no more no more no more. Hit the road Jack….”

Heathen science mimics religion by replacing wonder and respect for the unknown with doubt and contempt for what their science cannot observe with the five senses. Heathen science further mimics politicized religion by devising its own form of Inquisition and witch trials, replete with targeted taxation, regulation, and criminalization, including calls for the death penalty. The world of the heathen scientist? It’s minuscule, incomplete, without myth and its heroes, lacking belief in all except what is permitted by the statement’s author. 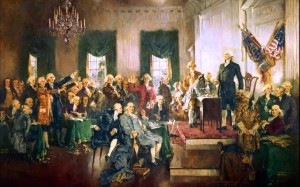 And the author. Who is the author? He is not an American. He is a Utopian, a socialist Utopian, an atheist, socialist Utopian. John Locke claimed in his natural state men and women are a free people under subjection to no one. That it is often for the sake of commerce and safety in numbers a naturally free people accept governance by others. So Americans in 1776, accepted governance by elected representatives to a very limited degree. They accepted a divided government with little concentration of power in any one individual. Others living here long after the founding, who have given up on those limits, who have acquiesced to a big government, centrally planned society have lost sight of their birthright. They have by and large substituted for the Founders the alien author. He is an author who denies life, liberty, and the pursuit of happiness or property to Americans and socialists alike, because he is right. Because everyone else is wrong. The author is the new religion replacing all religions, all philosophies and opinions. He has the divine right, without the divine.

The coal miners of West Virginia backed, voted for, and supported with union dues their abusers. They back benched their Bibles, religion, guns, contrarian views, and their family economics because they imagined a very few people in Washington, those they voted for, were more intelligent than they were. They accepted as the settled science of the heathen scientists politicized by Washington, the remotely possible theory of global warming as exacerbated by carbon dioxide. On the basis of the politicized settled science of global warming the coal miners accepted the all-wise decision making of their elected and unelected politicized government leaders. The politicized wise leaders of government, on their part, promised and guaranteed solar and wind were economically and technologically feasible because for them all resources are unlimited and immediately available. Press a button. It appears. Mandate it. Presto.

They finally met reality face to face and told her to leave. The Ex and her politicized political party are out. Freedom is back. Miners have discovered, “My labor is limited.” “I can only work so many hours.” “A few dollars buy a little.” “Ideas have value and must be closely guarded to prevent them from being frittered away.” “Government should budget like I budget my household.”

Wow. Any individual West Virginia coal miner is smarter than the lot of fifth graders in Washington. Politicized Washington is dumber than a pile of politicized rocks. The Ex is out. Liberty is in. Whew! About time.