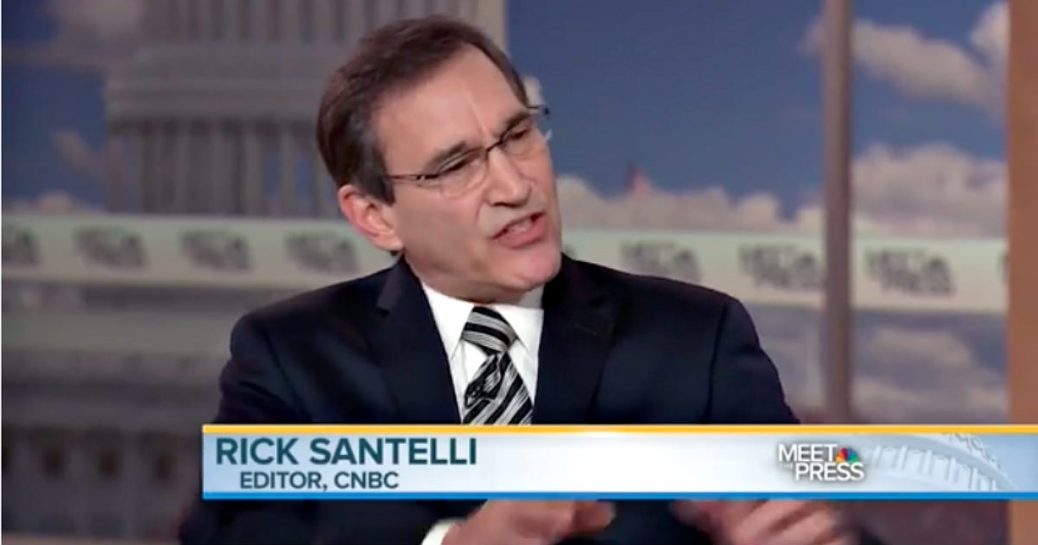 Rick Santelli is sometimes called the “godfather” of the Tea Party because of an epic rant he launched into in 2009 that is widely viewed as the birth of the Tea Party movement. Here’s the spectacular speech –

That was an awesome moment in television history, but Santelli may have just topped it.

On Sunday’s episode of NBC’s Meet the Press Santelli confronted a gaggle of liberal NBC pundits who he argued were thoroughly saddened by Hillary Clinton’s loss.

Rick Santelli: You know, if Hillary didn’t have her email problem, and we didn’t go back to 2009 and see whether it was Lindsey Graham or John McCain make a bigger issue out of all the hacking that was going on, when Target gets hacked, I don’t hear people saying, “Hey, was it Kohl’s, was it Wal-Mart?” It doesn’t matter. There was a hack, you deal with it.

I think that what’s going on here is really so politically driven. It doesn’t matter who did what when. Working with Russia, we worked with Iran. Are they our friends? You have to take each situation uniquely. Listen, the president-elect has a boatload of issues. I agree with the pull of his ego. But I think that the media in general is just being quite unfair here.

Chuck Todd: Wait, why is the media an issue?

Rick Santelli: Why is the media an issue?

Chuck Todd: This is the intelligence community.

Rick Santelli: Okay, it’s intelligence. Where was all of this when the D.N.C. was hacked in June? See, this wasn’t made an issue. Because it would have put the emails and Hillary’s server right in the middle in the thick of it. That’s why this went under the radar screen. This is all tied together.

Donna Edwards: Wait. We have to not conflate the Hillary emails with the–

Rick Santelli: Why wasn’t this investigated long ago?

Donna Edwards: Let me finish. With the Russian interference in this election. I don’t agree with Kellyanne Conway. I actually do think that the Russians got what they wanted. They interfered, they are creating this chaos, we are two weeks outside of an inauguration. And we have chaos around what happened during an election process. So I think that there was success.

And I think the president-elect needs to not just move from accepting that there was an attempt, but to really going after the Russians because here it’s the election, the next time it’s another election. Maybe it’s the Republicans. Maybe it’s our economic system. And we have to treat this seriously. And the president-elect needs to get out of campaign mode and get into governing.

David Brooks: Putin is a guy who murders journalists, who’s destroyed the democratic process in his own country, and now suddenly he feels the freedom to try to do that in our country. I don’t know– It’s not normal statecraft.

Rick Santelli: –to see Russia is happy because Trump won on election night, I never saw you so unhappy. You picked sides, everybody picked sides.