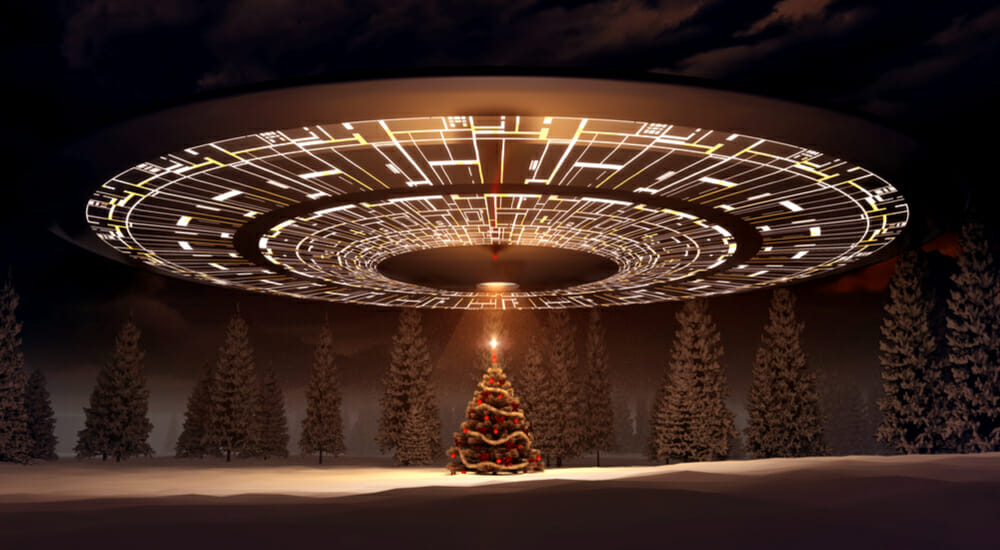 In this Christmas season, there is now underway an unparalleled number of UFO sightings! One way this is best realized is to follow the daily reports from a single city. Sky Watcher News follows this new trend to report on sightings in only one city. Many more UFO channels are sure to follow!  Click here!

It is possible a record number of UFOs are now seen and recorded daily, simply because we now have the technology and instantaneous media to do so. Nevertheless, the phenomena is growing worldwide attention.

But there does seem to occur UFO sightings with no historical precedent. For example, groups of UFOs filmed, surrounding what appears to be a CERN portal. CERN in Switzerland with its large Hadron collider, as reported by credible researchers such as Tom Horn and Steve Quayle, are opening doors to a dimension to release fallen angels.

Here is an excellent example of three clearly-viewable UFOs guarding what appears to be a CERN portal. Please click here. Is it the apocalyptic signs in the sky are mounting?  Are the faces in these CERN portals those of fallen angels, now released through CERN?  Or could these be the faces of abducted CERN employees, of those cases which are thoroughly documented?

What are we to make of this? It is important to remember another Biblical name for “angels” is “watchers.” As we see in the much maligned Book of Enoch, fallen angels were once “watchers.” Are they now returning to their former positions through CERN?

But true angels are also “watchers.” Your guardian angel watches over you. And there exist a hierarchy of good angels on several levels with different purposes.: Some are assigned upon earth, while others quietly soar through the heavenlies, routinely “watching” as they do this Christmas season.

Satan can only counterfeit and it appears he has done this, duplicating imperfectly the UFO technology we see regarding Enoch and Elijah. UFO technology, in this sense, is actually ancient technology, passed on by fallen angels to the Nazis, for example, whose UFO plans were obtained in 1945 and studied by MIT USAF officers in Washington state… MIT officers who knew they were workable Nazi blueprints, derived from ancient technology.

So what is going on today? Why is this unparalleled swarm of UFO activity occurring? Perhaps in an Essene “sons of light and darkness” perspective, revealed in the Qumran Dead Sea Scrolls, the battles between fallen and loyal angels are intensifying, as the Book of Revelation assures us they will!

This Christmas Eve, while looking up at the myriad of twinkling stars, one can only pause and say, “Are these all stars?” In the days ahead, 2018 will most assuredly tell us more….