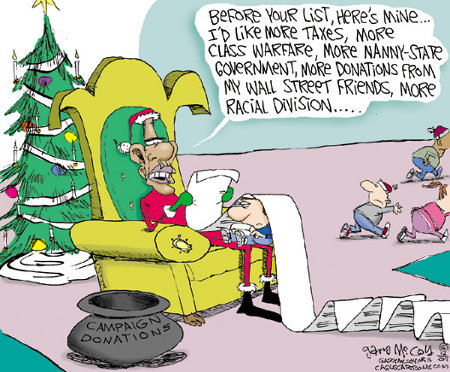 Which is it? Ho Ho Ho or Bah! Humbug!

When it comes to the Barack Obama presents you received during his administration, what you got is a visit from a Christmas basher without the redeeming value of a Grinch or Scrooge. Examine the generous gifts this “Bad Santa” doled out during his holiday season. Postponing another indulgent vacation is a small price to pay for the enjoyment of keeping the cheer and folly celebration going. Be damn the cost, it is just too much fun to stop this excitement of stuffing coal in your stocking, once again.

How does your personal joy stack up during Obama’s 12 days of Christmas? .Julia Edwards, in the National Journal, presents Obama’s Wish List: What the White House Wants Passed by Christmas.

“This holiday season, the president isn’t asking for anything new–he just doesn’t want to lose what he already has. The super committee’s failure means that five programs–some that cut, some that spend, and all of which cost millions–now face a 2012 expiration date. President Obama seems to be devoting all his energy to the item on the top of his list: the payroll-tax cut. We review what the White House is doing—or not doing—to see that each extension is granted and what’s at stake should Congress not act in time.”

Not to be outdone, Joseph A. Thie, in the Knoxnews writes in President Barack Obama’s Christmas wish list:

The Chinese bail us out of debt.

Iranians turn over their nuclear weapons to Israel.

Unemployment drops to 0 percent before next November.

Hugo Chavez gives us all his oil free, starting a price war with the Arabs.

Congress passes everything by unanimous consent.

Find trillions inside the Social Security lockbox that everyone says is empty.

People don’t get sick anymore and use up Medicare, Medicaid and insurance money.

That Fox News and Rush Limbaugh quit picking on me.

If all of this is asking too much, then I want just one thing: In the spirit of Christmas, Republican candidates all campaign for me instead of themselves.

Now this opportunistic plan for a utopian socialist paradise is most unlikely to create peace on earth. But the sentiment is what counts in the era of short memories and spinning lies.

It takes an observation from South America to place the correct perspective on celebrating the “not so good” South Park Obama.Patricio Navia in the Buenos Aires Herald writes,

“Obama’s past fortunes certainly aided his career. As he waits for his Christmas and Epiphany presents, Obama might very well get what he most wants, a weakened Republican presidential nominee who will not be able to capitalize on the sorry state of the American economy and will fail to convince Americans that they should actually punish their incumbent president. Despite his high disapproval, Obama might just win simply because the Republicans are handing him the best possible Christmas present: a weak challenger for the November 2012 election.”

Not to dump solely on the Kenyan troll in the White House, the Bush Year End Christmas List, back in 2003 has application in the current administration.

“With political approval rising in the polls, it becomes the measure of the mental deterioration in the country. Endorsement of politicians is the nectar for tyranny. As long as the public believes that government is the essential Santa, the consolidation of despotism goes uninterrupted. Elevating Bush into a St Nick, in order to get more presents from the State is childish. Little kids love toys, but adults prefer liberty. Americans don’t need to be consumed about being safe from foreign foes, there are ample domestic antagonists sitting in the seats of public office.”

The point that Terence P. Jeffrey makes in U.S. Capitol Christmas Tree Pays Homage to Obama—But Not Jesus illustrates the “enlightening” disconnect the progressive Obama administration has with our tradition.

“The state that sends the tree in any given year, according to the Architect of the Capitol, chooses the theme for the ornaments it will bear. People from that state create the ornaments and donate them to the government.

This year’s tree came from the Stanislaus National Forest in Tuolumne County, Calif., which sits on the western slope of the Sierra Nevada Mountains, due East of San Francisco.”

The collective mindset that underpins the Kalifornia culture that produces the Amerika despotism of this Barry Soetoro faux Kriss Kringle, betrays the true meaning of Christmas.

The Christmas segment in the Dueling Twins series provides the serious context of the celebration that is absent from the secular worship of the Marxist/Fascists union that produces homage to the links of Obama.

“All those trees will not make the “Cross of Christ”. Yet, how many of those saintly open-minded Scribes would allow the happy vitality of the season if all those trees lost their branches and needles and stood straight and upright with just one horizontal timber to support the faith in salvation through the Messiah? So we are supposed to swallow that the ACLU is charitable by demanding a neutral Caiphas public policy? Pray tell, what other blasphemy is necessary to endure in the quest for “Simple Politeness”?”

A tradition on BATR is the ‘Beltway Update’ of a famous poem. Substitute Harry Reid for Tom Daschle and you have the Obama version. How many more of these Christmas Wish Lists can we endure?

‘Twas the night before Christmas, when all through the house

So few of courage, and oh so many who act as a louse;

The stockings were hung by the chimney with care,

The children were nestled all snug in the beds,

While their future’s have been hurt and all but dead;

And mamma in her ‘kerchief, and I in my cap,

Have ignored our care and are all over the map,

When out in the lawn there arose such a clatter,

To accept another gov’t check, that makes us fatter.

Away to the window I flew like a flash,

And opened the letter, I need my cash.

The moon on the breast of the new-fallen snow

Bring us hope that it will bring us even more dough,

When, what to my wondering eyes should appear,

A little image of my hero, Tom Daschle so near,

With a little old driver, so lively and quirk,

He steals from the rich with not even a lurk.

More rapid than eagles his coursers they came,

Give me more, from THEM, and remember my name;

On, FOOLISH! on STUPID! on, DUMBBELL and DIMWIT!

Take all you can, it’s a gift for you to spend at the mall!”

As dry leaves that before the wild hurricane fly,

It’s all gov’t money not yours, and that is no lie,

So up to the house-top the coursers they flew,

If you want your share, be loyal and pay your due.

And then, in a twinkling, I heard on the roof,

The sound of an obstructionist who acts aloof.

As I drew in my hand, and was turning around,

All the reasons we will still be kept in our bounds.

He was dressed in fur, from head to his foot,

His manner was mind, while stealing all the loot;

A bundle of toys he had flung on his back,

He smiles, it takes 60 votes to pass, of which you lack.

His eyes — how they twinkled! his dimples how merry!

If its not my way, you guys will never get your bill to carry!

His droll little mouth was drawn up like a bow,

Let’s be clear, us Democrats are really your foe;

The stump of a pipe he held tight in his teeth,

You will never get real help, from the gov’t elite;

He had a broad face and a little round belly,

He was chubby and plump, a right jolly old elf,

You need us to live, we won’t let you do it yourself;

A wink of his eye and a twist of the head,

Let us know he is a man, who bring only dread;

He spoke not a word, but went straight to his work,

Fleecing your pockets and hitting you where it hurts,

And laying his finger aside of his nose,

He gives the middle digit and continues to hose;

He sprang to his sleigh, to his team gave a whisle,

There are many more programs that have yet to fizzle.

But I heard him exclaim, ere he drove out of sight,

“Happy Xmas, without US, you cannot have a Good Night!”