I’ve thought about this for several days as Donald Trump has all but claimed the Republican nomination.  It is very troubling that some Republicans, Conservative Republicans, leaders in our party, have intimated they’d actually vote for Mrs. Clinton.  As a Ted Cruz backer from the get-go, voting for Mrs. Clinton is not going to happen.  Here’s a few things Trump has said he would do, and I believe, that Trump will try to accomplish if elected:

1.  Build a wall, or work to secure our borders in some way.  Actually building it will take congressional approval and of course, funding; regardless of what he says about the Mexicans “paying for it”.  However, he could issue an Executive Order like his soon-to-be predecessor has done so many times…adhering to Constitutional principals didn’t slow the current president down.

2.  Take the fight to ISIS and radical Islamic Fundamentalism.  Let’s be very clear, we are in a fight to preserve Western Civilization.  Islamic Fundamentalism/Fascism is the enemy, period.  They have successfully infiltrated Europe and likely have strongholds in the western hemisphere. Certainly areas in Michigan and urban areas around the country.  Wake up people.

3.  Fix our trade deals.  Although we may wind up paying three times as much for a Carrier A/C unit, 72″ flat screen smart TV, or a pair of Wrangler jeans from Wal-Mart; by taxing the hell out of imports from Mexico and China, it could happen.  Again, congressional approval should be part of the process.  But, there’s always that Executive Order option…

4.  Fix the Department of Veterans Affairs.  A massive undertaking.  My company works on multiple VA contracts.  My recommendation:  Retire all government employees over a two-four year period and privatize it.  That, may work.

5.  Revamp the tax code.  He’s said a few times he’s for the “Penny Plan” of adding a potential national sales tax or amendment to the income tax code.

6.  Rescind the Iranian Deal.  Executive Order should do it…I doubt Congress will attempt to intervene until we lose the mid terms back to the socialists.

8.  Probably most importantly, when asked directly about the life/abortion issue, he told O’Reilly on his show recently that he is Pro Life and would appoint conservative judges to the Supreme Court.

Mrs. Clinton will not do any of the above.

She will raise taxes.  She will not secure the border.  She will expand Obamacare and continue to foster the redistribution of wealth schemes orchestrated by the current president and Democrat congressional cronies.  She will continue to pander to Islam and do nothing to counter its spread to the west.  She will appoint multiple liberal judges to the Supreme Court.  I disagree that she is “business as usual concealed by a little progressive smoke…”.  I believe she is very dangerous.  She is a bully, a liar, morally bankrupt, and will take this country to new lows. Mrs. Clinton is exponentially worse than Trump in that she is criminal at best and a sociopath at worse.  She, and the Democrat Party survive only because of the vast ignorance of the “low information voter” with his/her hand extended, abortion on demand, mired in the culture of dependency created by FDR, propelled by the Civil Rights Act of 1964 (then President Johnson:  “…with the passage of this law, we’ll have blacks voting Democrat for the next 500 years”), and now, the current president’s recent “endorsement” of Black Lives Matter at a recent university commencement…Folks, this nation is fracturing and on the verge of going the way of the Roman Empire. 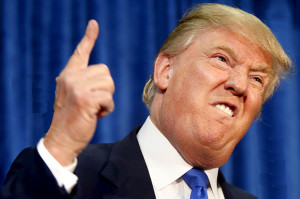 Trump is certainly a narcissist, boorish and clearly not articulate.  No, I don’t believe he’s preyed on fears and anxieties; he’s cleverly countered by providing a symbol, hell, leadership, that has been absent for 8-plus years.  He’s the exact opposite of everything associated with being a politician that many Americans have come to loath.  Mrs. Clinton is a unpolished politician, also with a significant narcissist complex, but not an intellectual.  The true Left Wing intellectuals will ride her name recognition and the hope that the U.S. is ready for a female CINC whether she’s qualified or not.  Trump is street smart, hates to lose, and clearly identifies with middle class republicans and democrats that have suffered through the recession, lost jobs, low wages, and the burden of massive government.

I happen to really appreciate Trump’s nationalist views – remember that threat to Western Civilization – aren’t we all ready to be AMERICANS that speak English, be respected, and feared, around the world?  I think no one would argue that embracing “multi-culturalism” has significantly contributed to the politically correct, I-need-a-safe-place, God-straying culture that has spread over our society the last 25 years.  We, the Republican Party, has failed to identify and seize what it takes to win national elections and created the populist environment that Trump has latched onto in building and growing his campaign and its enthusiasts.  Unfortunately for many of us true Conservatives, Cruz is the intellectual, highly qualified “politician”, albeit the outsider that we “informed voters” know and understand, who just couldn’t connect like Trump.  He had the added challenge of fending off The Establishment on his other flank…As a Christian, I believe that it was God’s will that Cruz failed at this objective in his career.  I believe He has greater accomplishments for Ted Cruz in the future.

We may be on the precipice of change in the conservative movement as the Republican Party as we have known it possibly breathes in its final gasps.  Change is coming.  Maybe its time the tree of liberty shed some blood.  Brutus was all in.