China would never go to War over North Korea 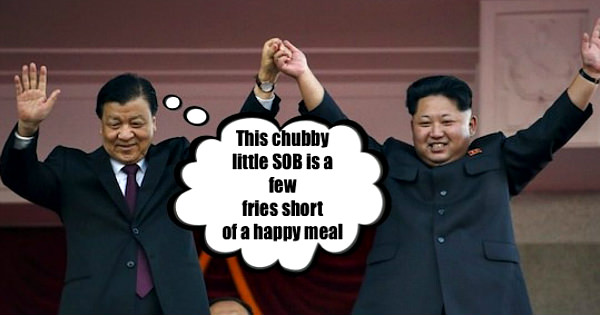 North Korean has been a loyal dog to China keeping the United States on the defensive, but their mad dog has become so rabid and is now posing a threat to the world – including themselves.

North Korean nukes and missiles – many dangers and options

Liberals love making stupid analogies like, ‘if sit in your running car in a closed garage you will discover how you are poisoning the planet.’  They take no account of even elementary science that the planet’s atmosphere circulates and what we put up in it is washed back down.  If you believe water is beneficial and you fill up the sink and stick your face in it for five minutes you also would find you are wrong.  Liberals are so dysfunctional that a question was posed to leftist Juan Williams on The Five by Jesse Watters – If Mexico deports Americans who illegally crossed their border they are seen as exercising their rightful laws protecting their borders, but if the USA deports Mexicans who illegally crossed their border then they are seen as racist,’ to which Williams said, ‘that’s the “bad analogies of the Right.’  Obviously it was not a bad comparison, but a perfect example of two-faced liberal beliefs.  Here is an analogy of the danger posed by Kim Jong Un to the world works that also works perfectly but at which liberals will scoff:

Your neighbor, who lives in a hovel near your nice house, doesn’t like you and wants you to pay him for his suffering even though he inflicts that suffering on himself with his drug use and irresponsible spending habits.  (Sound familiar?  That pretty much describes the entire Democrat Party.)  So he goes out and shoots his rifle so the bullet passes over your house.  He tells you he’s making a rifle grenade that he’s going to shoot into your bedroom window if you don’t concede to his demands.  The police will only give him warnings to stop threatening to give him a ticket if he continues.  (This is what Kim is doing on a national scale when he shoots missiles over Japan and is building nuclear warheads to put in them.)  What do you do?

The UN is the closest thing we have to world police and they do nothing but write Kim letters giving him warnings to stop or threaten sanctions that Chicoms and socialist regimes around the world violate.  No one tries to restrain him with actual action, just words.  What would you do if the police did nothing more than tell your neighbor don’t do that?  Better yet, would the government allow an angry citizen to shoot a rifle over the Capitol Building as they allow North Korea to shoot missiles over their neighbor’s country?  You can bet the politicians would have the police take that person down and either kill him or take his weapon and throw him in prison.  So why is your life worth less?  Why is Kim allowed to run rampant like a rabid dog?  There are always three options in any choice; yes, no, or abstain.  The United States’ choices on how to deal with North Korea have been; to go to war, concede to the Nork’s demands, or ignore them.  Bush ignored them and they completed development of their nuclear bombs.  Conceding to their demands as Clinton and Obama have done has only made them demand more which is the way of all blackmailing criminals.  China is responsible for enabling North Korea after facilitating their survival in the 1950 war when they kept them from being destroyed following their failed attempt to conquer South Korea.

But the world has changed.  China and the U.S. are now in a symbiotic economic relationship.  If the U.S. decided to smash the insane Norks before they destroy Seoul or Tokyo or Honolulu or Seattle, China has now stated they will do nothing.  They would not dare risk war with the USA because their economy would be utterly destroyed.  They cannot even risk an economic war.  What are they going to do?  Tell U.S. companies to get out?  Half a billion Chinese would rise up in a rage if their government stupidly kicked out the Golden Goose as a show of strength.  Liberal Democrats are all in a dither that China may call America’s trillion dollar debt due.  Simpletons!  If America and China go to war then the debt is cancelled and China sinks like a stone in water!  Would China nuke America?  Sure, let’s not just kick out the Golden Goose, but kill it?  Here’s a clue; the Chicoms are not as stupid as the Democrazis.  President Trump has very ample power to twist China’s arm to starve and subdue their rabid dog.  But they are now in as much fear of Kim and may be forced to oust him themselves, which would result in everyone in the world winning.  North Korea and Iran are rabid parasites whose leaders need to be destroyed before they cause a global catastrophe.  The two of them sharing nuclear capabilities with which to blackmail the free world under the umbrella of Communist regimes must be brought to an end before they cause that calamity by acting like children with guns.

Great Wars of the Last Century

Liberals are uneducated.  They know the names of World War One and World War Two and the invasions of Iraq, and they know the notorious reputation of Hitler, but they know little about these wars, the leaders, and the people involved.  It would require a doctorate’s degree or a lifetime of learning military history to know and understand what is necessary to fully understand America’s wars and wars throughout history.  Liberals only understand what they have been told by leftists who hate America because they side with America’s enemies, and that is where they go completely wrong.  Socialism in the 20th century was the greatest evil to be visited upon all the nations of the world.  While they condemn the nation socialism of the Nazis, they see it as some form of capitalist imperialism that was adopted by America.  They do not understand that WWII was begun by Nazi Germany, Fascist Italy, Imperial Japan, and Communist Russia, ALL of them ruled by leftist totalitarian dictators who desired to make their nations greater by conquering their neighbors.  There are two ways to create wealth; you trade, or you steal.  Hitler, Mussolini, Tojo, and Stalin all decided they would take it by stealing from other nations.  Liberals are taught that the Russians were the good guys in WWII which is a great lie.  Russia and Germany were allied at the beginning of the war.  The U.S. and Britain only allied with them because Hitler attacked and Russia was needed to tie down the bulk of the German army.  Otherwise the invasion of Fortress Europe would never have happened.  Liberals are taught the Russians won WWII, but they did not.  Were it not for the supplies given them by the USA they would have been conquered by the German war machine.  The industrial might of America in WWII is what saved the world from domination.  Even so, keeping Russia alive as a necessity resulted in their resurgence after the war to continue conquest as they subjugated Eastern Europe for the next half century.  It was only through the determination and leadership of one of America’s greatest presidents who brought down the Berlin Wall and collapsed the Iron Curtain.  Liberals are taught that Reagan led America into decline when he actually led an American revival.  The history taught by leftists is all a lie that is being taught to our children to warp their understanding of history, which is why these socialists, these Communists and Nazis of the Left that have infiltrated America’s educational system in order to corrupt our youth should never have been allowed.

The one bright spot in all of this is President Trump – the master of the art of the deal who chose to jump into the swamp in an attempt to clean it out.  What every deal maker knows is that the best deal is one in which those with whom you are dealing choose to do what you want them to do because they see it is to their own benefit.  China created this mad dog.  China should be the one to take him out.  If they want to continue to prosper then they to need to make the deal to strip North Korea of their missiles and nukes – and good luck to them.  Republicans and Democrats will not make any deals beneficial to the United States unless it directly benefits their wallets.  There too much invested in having boogie men like Al-Qaeda, ISIS, the Norks, healthcare, and global warming with which to manipulate the people into giving up their freedoms and wealth for protection.  Donald Trump is the opposite of Barack Obama who said he would make America greater and instead sold it out to the leftist regimes of the world.  President Trump deserves the support of the people as the only man to be in Washington who is striving with all his abilities to force Republicans to live up to their campaign promises rather than just say what they need to and then go along with the Democrats to get what they want.