The Charge of the Transgender Brigade 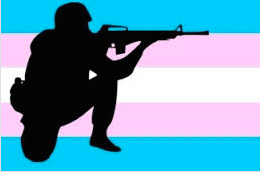 Ours is not to wonder why – ours is just to do or get fined. Okay – that’s not exactly accurate, unless you are one of the 600 left to oppose the left’s new civil right – the rights of transgenders or “gender-non-conforming people.”

For all these years close-minded conservatives have been under the misconception that a person’s sex is synonymous with their gender. Silly backwoods bumpkins. It’s time we were dragged from the dark ages to the 21st century where all gender is fluid.

And just to make sure we comply – federal, state, and city governments will force us into the proper genderless state of mind.

President Obama recently decreed that all public schools adhere to his new genderless bathroom policy or risk losing their federal education allocations. But he can’t just do that! Of course he can. Other pharaohs before him have made decrees – why not him. So let it be written – so let it be done.

Not to be outdone by Pharaoh Obama, the Communist Politburo of New York City, headed by Comrade Bill de Blasio, has upped the ante.

So Comrade de Blasio directed the NYC Commission on Human Rights to draft legal guidelines which “mandate that anyone who provides jobs or housing must use individuals’ preferred gender pronouns.

“Employers and landlords who intentionally and consistently ignore using pronouns such as ‘ze/hir’ to refer to transgender workers and tenants who request them – may be subject to fines as high as $250,000.”

Hold on there. I thought that transgendering (which is impossible) is the transforming of a male into a female or vice versa. So if a dude wants to be a girl, wouldn’t he/she/it want to be called a he or she?

Don’t be silly. The point of this social exercise is to muddy the waters of normalcy and tradition as much is possible. If “ze” ever becomes part of the normal American lexicon, it will have to then be usurped by some other more absurd gender fluid pronoun.

The Gothamist.com insists that the New York Post is overemphasizing the potential $250,000 fine. They explain that fines would only be imposed on those “who maliciously discriminate against transgender or gender-nonconforming individuals by misgendering them would be ‘determined based on the severity of the violation, a history of previous violations, knowledge of the NYC human rights law and the violating company’s size.”

Oh – now I get it. It’s not just about transgender rights. It’s also a shakedown scheme. Did you catch the end of the last quote – depending on “the violating company’s size?” Needless to say, the larger the company, the more cash can be extorted from them – of course knowing full well that most companies will pay the paltry $250,000 fine to avoid any leftist wrath.

Still, to the true believers, this is about some new human right. The city has simply found a way to combine the two. However, if they really want to capitalize on those, they should find themselves a transgender Al Sharpton who can approach companies for a preemptive shakedown.

The American left, through the tutelage of the Obama administration is determined to completely upend traditional society and it appears things couldn’t be going better. At this pace, we won’t recognize the country in 10 years – maybe less.

Perhaps conservatives should all move to Texas and secede while we still have the chance to move about freely.