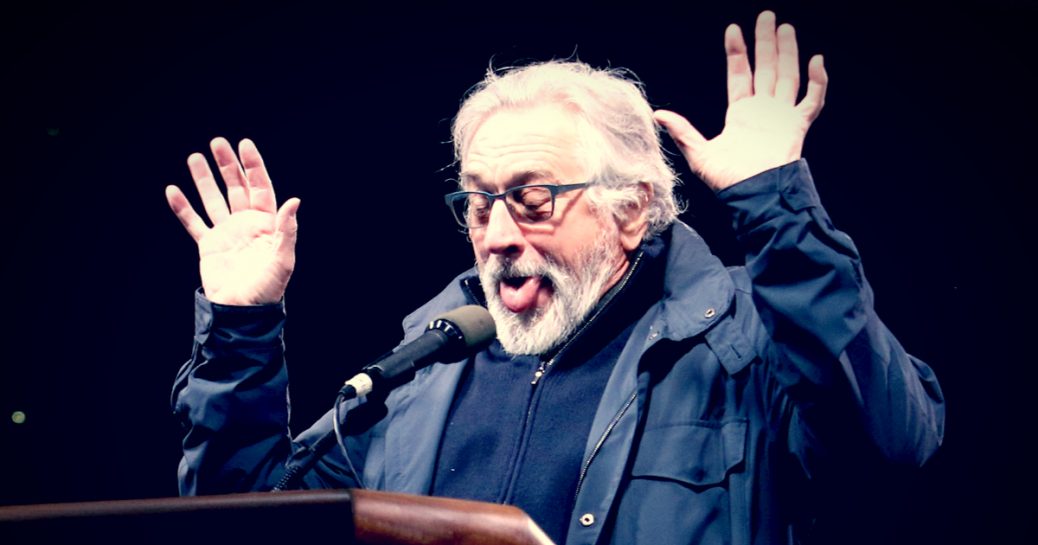 Editorial credit: JStone / Shutterstock.com
NEW YORK-Tuesday- 6/11/18…I would not watch the Tony Awards last night. First of all I have more to do than watch a bunch of ham actors and actresses patting each other on the back and telling the world how great they (we) are. Even the participants didn’t seem to know what they were there for.
Robert DeNiro, a wanna be mafia don, seemed to think he was there to advise us on Washington, D.C. politics, yelling out, “F…k Trump!”  A phrase he repeated as the audience cheered and got to their feet.  This writer saw the video today. Yep, standing ovation for insulting the man millions of people voted for to lead our country.
That event was supposed to be about Broadway with awards given to those who performed better than others. Not to publicly disrespect our president or to use disrespectful words.
We ask this valid question. Isn’t there strict laws in the books regarding public obscenity?  There was at one time. Actors, like Mae West was jailed for using even slight vulgarity on the stage and in her movies. Lenny Bruce was arrested on the spot for saying the “F” word on stage at a club in New York.
This event bothered me for several reasons.  As this is being written, President Donald Trump is in North Korea, meeting with Dictator Kim Jong Un a man who has threatened the entire world, including the U.S. with Nuclear destruction.
President Donald Trump is the first and only world leader to contact him and arrange a face to face meeting. Only he could have pulled that off. The meeting is in progress at this moment.
President Trump meeting with the North Korean Leader is absolutely a first. And if he accomplishes this peace accord, he must be given the Nobel Prize even though Obama received the Nobel Prize simply for being dumped–not elected–into The Oval Office. Another case of insanity politics.
And THIS is the man, our president, that  DeNiro referred to from the stage, and seen by millions on television, using his typical filthy language to screech…
“F..K Trump!”
For Robert DeNiro to splatter out that obscenity in public is in itself criminal. This vulgarity was heard and seen by millions of people including children. Att: DEPARTMENT OF JUSTICE in D.C., if possible, please take action against this low life for public obscenities. That law should still be on the books.
It was sad to see the magnificent Radio City Music Hall, a stage I have been on, become a receptacle for low life trash. Plus, there was a time when the acting profession was professional and the actors and actresses were ladies and gentlemen, carried dignity wherever they went, wore suits on personal appearances and on TV, were well groomed, and never, never were heard using such obscene words.
Yes, there were real actors, real stars in those days. But now, unfortunately, Hollywood has become a cesspool of muck. We look forward to seeing the ratings of this abomination last night.
Broadway, at one time, offered the ultimate stage presentations. However the Broadway crowd is now the same. When Vice President Pence went to a theater to see “Hamilton,” in order to relax and enjoy a show with his family, those bastards went to the front of the stage and insulted our vice president. (Don’t panic, that is a Biblical word.)
If we were to wise up and stop spending our money to go to movies, or spend our time watching TV, stage and screen awards be given to these egomaniacs for pretending to be someone else, and spend time with our families, we would be much better off.
ANALYZING TODAY’S NEWS FOR TOMORROW’S HISTORY
Photo Caption: Robert DeNiro A Classless Wart