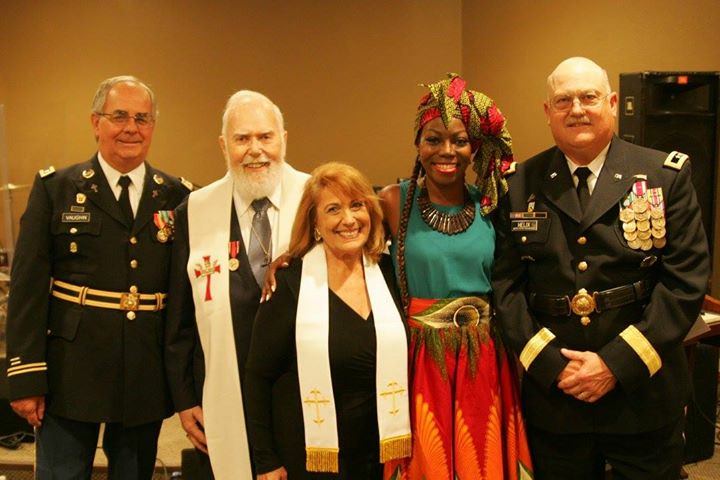 BRENTWOOD, Northern California 9/25/15– In a colorful ceremony complete with pageantry, 21 chaplains were certified for duty in the East Bay area of Northern California. The sacred and joyful event began with this writer (who founded the East Bay Chaplains and trained them), started the ceremony with a brief talk and the opening prayer, then introduced Chaplain Priscilla Martinez who had been appointed as the new chaplain instructor.

Following her informative address, she next introduced the graduates. General Dan Helix and Colonel Timothy Vaughn, both is dress uniforms, led the processional. After each graduate was standing in place, the certificates were presented.

General Helix gave the keynote address, which was interrupted several times with appreciated applause. Then, in a totally unexpected move, The General called this writer up, “Front and Center,” to present an award certificate and metal of honor for having organized and taught the original chaplain classes.

Pastor Felix Golden, who graciously hosted this event in his church, His Presence Christian Worship Center in Brentwood, the home church of Chaplain Priscilla and many of the chaplains, wrapped it up with a brief but very meaningful talk. The entire event, packed with action, went exactly one hour.

The East Bay Chaplains play a vital role in Contra Costa County. Their motto is: Stand Ready, Be Prayed Up, and Keep The Vessel Clean.  Several have already received assignments. New Chaplain Felicia Purcell, dressed in colorful African attire, is being asked to be the Chaplain of The San Francisco Warriors Basketball Team.

Joan Segura is already officially the chaplain for El Peblo low income housing in Pittsburg. Christian Rap Artist George Miller and his wife, Salena Boatner-Miller will be chaplains for their concerts while Bill and Julie Swenson who were both certified, work as a team to broaden their ministry to the homeless and addicts.

Others will be placed, some with Instructor Priscilla, who is chaplain of Shepherd’s Gate, a home for battered women and children. And this is just a beginning.

At the end of the service there was a long standing ovation. The chaplain’s motto is: “To serve others at their time and place of need.” It is a totally devoted ministry where they willingly give up all rights to themselves to always be available to others. There is no such thing as ‘convenience’ for chaplains. They are there for the convenience of others who need them, often at a split-second notice. It is a totally unselfish endeavor that places all others before themselves.

This new class is an example of diversity at its best, with graduates coming from all backgrounds and a couple of them from different countries. Each one would be a welcome addition to any community.