The Censors of Freedom Who Call Themselves Democrats 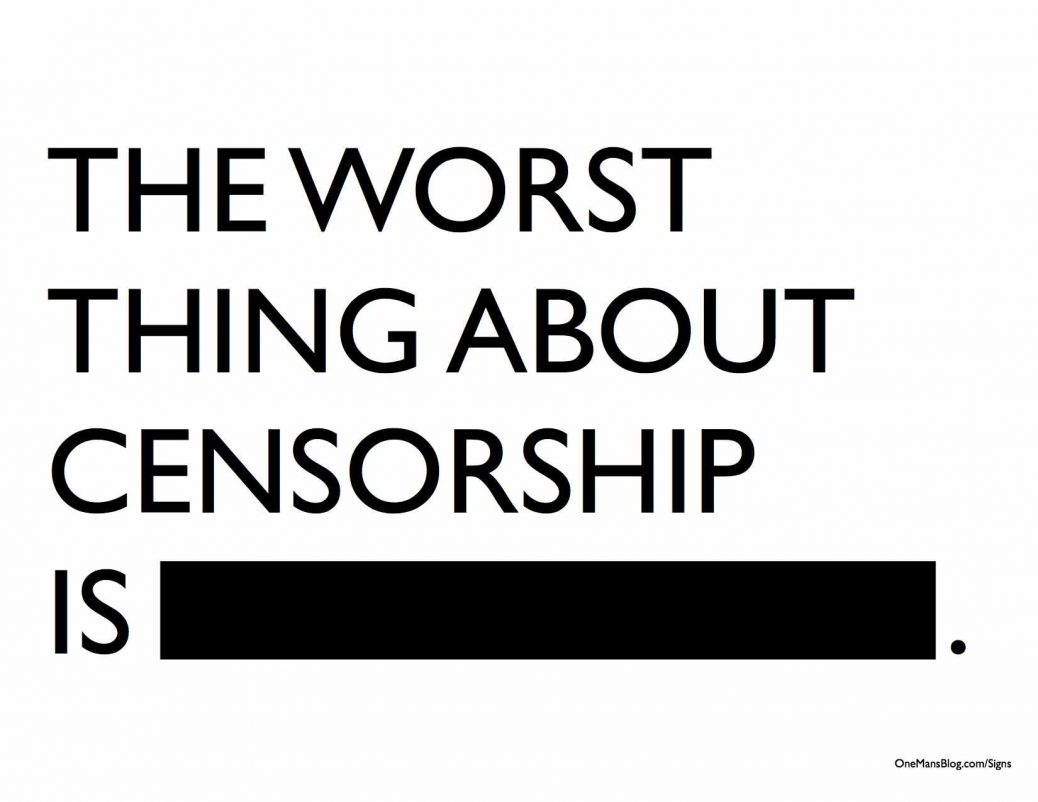 Leaders of the Democratic Party call themselves some very nice names, but their behavior is most accurately called censorship. Some of the nice names are liberal, progressive, and of course democrat. Let us explore if these names correspond with their behavior.

Websters Dictionary defines liberal as “An advocate of freedom from restraint, especially in politics and religion.” In reality, Democrats want to give us many regulations to the point of telling us what light bulbs we should use. They advocate that we be free from the restraint of earning a living by giving welfare and food stamps to those unwise enough to take their bait. They also advocate against religion, but only because religion competes with government control. One thing is certain. Liberals do not stand for liberty.

Websters Dictionary defines progressive as “Moving forward; proceeding onward; advancing; improving.” How can anyone complain about such attributes? What is really going on is that the Democrats are giving themselves an undeserved compliment. They are certainly not moving forward if they move us toward socialism. Their self-compliment is as meaningless as when Sylvester Stallone calls himself sly.

Websters Dictionary defines democracy as “That form of government in which the supreme pow rs rest with the people.” In reality, the Democratic Party’s top priority is for their party to win every election. When they advocate that illegal aliens should get drivers licenses (which makes it easier to register to vote) and that ex-convicts should vote, they are simply recruiting likely Democrat voters. When they fixed the Democratic Party primary elections for Hillary Clinton last year, they were ensuring that their favorite candidate wins. For the next year and a half, they will obstruct the Republicans’ efforts to help the country because it will maximize their congressional election chances. They put the interests of their party before the wishes of the people. The people are just things to be manipulated every two years. The Democrats are not democrats.

What are the Democrats? The one trait that all Democrat leaders have is that they suppress speech. A recent example is Ann Coulter’s attempt the speak at UC Berkeley. When the Democrats learned of her scheduled appearance, they did not just choose not to attend. They threatened violent protests until Berkeley officials cancelled the speech. The Democrats prevented others from hearing Coulter’s point of view.

Another example is the typical college’s tendency to invite only liberals for commencement speeches. A rare exception is when Rutgers University invited former Secretary of State Condoleezza Rice to speak. After campus protests, Rice graciously declined the invitation. Rice may be too nice for her own good.

Another example is what is typically called the mainstream media. The Democrat view permeates most of television news, newspapers, and news magazines. As a result, television ratings and print media circulation have gone down. This caused the dismissal of many “journalists,” but they still decline to balance their reporting even to save their jobs. This causes Fox News to do very well in the ratings. Perhaps in response, Roger Ailes and Bill O’Reilly of Fox News were accused of sexual harassment by several women. I cannot judge their guilt, but I hear no complaints about alleged rapist Bill Clinton.

The one exception to the Democrats’ monopoly of the media is talk radio. Conservatives dominate that medium. The Democrats’ response is to recommend passing a law to bring back the “Fairness Doctrine,” which would require the Democratic Party to get equal time. I do not want to listen to an hour of brilliant conservative thought if I must then be punished with an hour of views that I have already found worthless. The Fairness Doctrine would cause the cancellation of talk radio shows. That is the doctrine’s objective.

Another example of “fairness” is “net neutrality.” With that, the government can decide that you are seeing too much of some websites and not enough of others. They then reduce the bandwidth of the naughty websites. The result is government censorship. By executive order, net neutrality was enacted in 2015.

The desire for censorship can only mean that the Democrats anticipate that discussion of the issues would lead to people voting against them. Are they fascists, socialists, or communists? I will leave it to you to decide what oppressive agenda they are hiding. The point is that they desperately want to avoid logical thought on the issues.

So what should they be called? Censors, silencers, suppressors or something else? Regardless, they should not be called democrats.