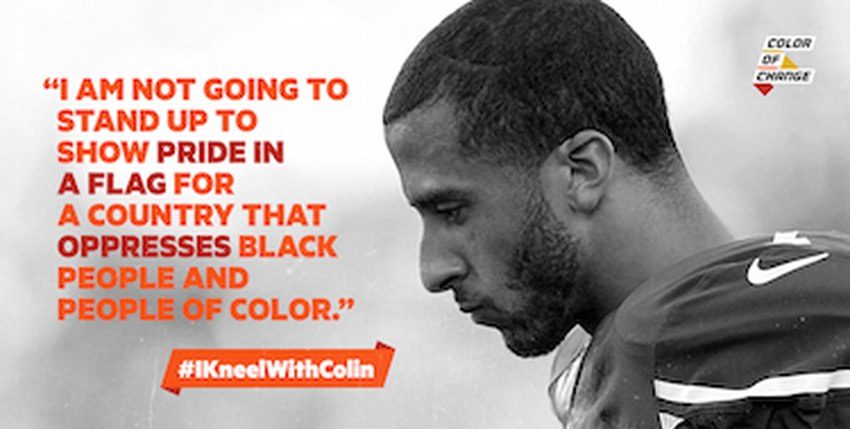 In our modern era of internet connectivity and 24-hour news cycles, for better or worse, celebrity is an instant megaphone for gaining national attention.

Especially for the controversial, or in former quarterback of the San Francisco 49ers Colin Kaepernick’s case, the foolishly aggrieved. Given his upbringing in a loving household by adoptive parents, a college scholarship—and per Spotrac earning $43,479,216 during a short-lived NFL career—one would think this manifestation of the American Dream would be the first to sing its praises. Yet, this “social justice warrior” instead chose to wear socks depicting little piggies wearing police hats. (How does that stunt not visually reference Black Lives Matter’s anarchist chant, “Pigs in a blanket, fry ’em like bacon”?) Furthermore, if that wasn’t derogatory enough, his habit of not standing during the national anthem also repeatedly violated polite sensibilities. In August of 2016, this agitator explained himself:“I am not going to stand up to show pride in a flag for a country that oppresses black people and people of color. To me, this is bigger than football and it would be selfish on my part to look the other way.”

Unfortunately, that divisive example has spurred a larger movement of disrespect by NFL players that has turned off patriotic Americans from watching a previously beloved sport. Specifically, Sunday Night Football is down 9 percent from last week. For context, that’s down 11 percent from the comparable game last year. Whether the loss of viewership will make a difference to the organization remains to be seen.

In any case, Mr. Kaepernick finds himself sacked for his lack of performance. Undoubtedly, his juvenile antics didn’t help matters either. If he’s made himself odious to the league, isn’t the fault his own? Beyond that, what has this sideshow really achieved? Colonel Nathan R. Jessep, played brilliantly by Jack Nicholson in “A Few Good Men” (1992), has the answer:

“All you did was weaken a country today, Kaffee. That’s all you did. … Sweet dreams, son.”

Why is metaphorical defecation on the American flag “the newest sport” of multimillionaire football players in the NFL? From grade school, all children are taught to stand, place hand over heart and salute the American flag. That’s the purpose of the Pledge of Allegiance—a unifying promise to country—one nation under God. Simply put, it’s the basis of civic responsibility and patriotism. By taking a knee (rather than standing), how is that not an act of blatant disrespect? Not to their fellow citizens per se, but to generations of buried soldiers who sacrificed everything to guarantee American liberty. A case in point is President Trump’s September 24 tweet:

Courageous Patriots have fought and died for our great American Flag — we MUST honor and respect it! MAKE AMERICA GREAT AGAIN!”

In this situation that freedom includes petulant protesters bemoaning their good fortune: being paid a king’s ransom for an hour of chasing a pigskin around a manicured field of dreams. What a tough life these pampered athletes have! How they “suffer” for their weekly gridiron exertions!

Certainly actual heroes, the ones facing gunfire storming the beaches at Normandy (read: the Allied invasion, codenamed Operation Neptune, on D-Day: Tuesday, June 6, 1944) during World War II—like our recovering wounded warriors of today—would laugh at the absurdity of such a pretentious comparison! After all, football is only a game: an artificial clash with rules and penalties. The goal is not to kill the enemy, it’s to achieve a high score. To that end, it has brightly uniformed teams, adversarial elements and risk to life and limb, but no weapons and medical professionals on standby. Likewise, while both activities tax body vitality, battlefields don’t have referees, timeouts or commercial interruptions. Moreover, recall that the base salary for a soldier is $19,198.80. Adding combat pay of $225.00 per month means another $2,700. As the average professional football player earns $1.9 million annually, who’s exactly sacrificing a lot here, Mr. Brady? (In any case, certainly not he. According to Forbes, Mr. Brady is the 15th–highest paid athlete in the world. With salary and endorsements, he earned whopping $44 million in 2016.)

What is football, or any sporting event, supposed to be? A lighthearted diversion from real-life stressors for the audience. So, who wants polarizing leftists ruining a traditional American entertainment with their in-your-face grievance pretenses? In any other profession, employees are fired for disruptive displays at the workplace on company time. Is that really what fans pay to see? And if they object, why don’t their feelings count?

Despite the superficial liberal narrative that this is a “racial” issue, it is not. The only pigments involved here are red, white and blue. After all, the flag’s stars and stripes do not play favorites. They do not represent a particular class, creed or color. Indeed, this uniquely American symbol epitomizes everyone within her borders. Thus, ironically, players kneeling in a posture of submission during the national anthem are a cultural “attack” on America’s foundation. Factoring in the U.S.’s many legitimate challenges, who needs Colin Kaepernick’s growing tempest in a teapot? Who is to blame for its cascading dishonor but his muddled followers? Game day politically correct rabble-rousers with lots of money, but not a lick of sense.