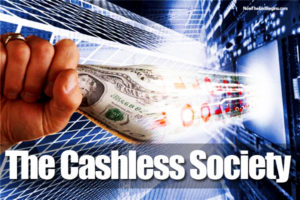 We’ve all seen them – futuristic movies where the World, nay, the Galaxy, runs only on transfers of electronic currency. In the Marvel movie, Guardians of the Galaxy, the transfer of “Credits” was commonplace.

In the 1986 film, Star Trek IV, The Voyage Home – Captain Kirk, Spock and others, travel back in time to 20th century San Francisco. When confronted by the local hero in the movie about their lack of funds, she says, “I suppose you don’t use money in the future,” to which Kirk shrugs and says they do not.

For most, back in the `80s, not using cash was unthinkable. Now, a mere 30 years later, it is fast becoming reality.

Progressive European nations like Sweden, Denmark and Norway are already well on their way to totally cashless economies. Today, four out of every five transactions in Sweden are electronic.

The nation of India has begun demonetizing cash, beginning with the popular, Rs 500 ($7.5) and Rs 1,000 ($15) bills. Prime Minister Narendra Modi announced last Tuesday, an effort to fight corruption by invalidating these most widely circulated currency bills in the country. In place of cash, banks in India have so far issued 25.9 million credit cards and 697.2 million debit cards.

Yesterday, Zero Hedge reported  that on November 16, “banking giant UBS proposed that eliminating Australia’s $100 and $50 bills would be “good for the economy and good for the banks.”

The sales pitch promoted by governments, banks, and a variety of know-it-all egg-heads, is that going cashless will save money, not having to produce and print cash, not to mention constantly monitoring its circulation.

Another of the most compelling reasons is traceability. It is said that cashless transactions can help prevent terrorist financing, money laundering, fraud, and tax evasion. Paper money tends to end up in the black market because it can’t be followed the way digital exchanges can.

Here in America, going cashless will be sold to the unsuspecting and uniformed as helping to curb illegal immigration and the illegal drug trade, as both deal almost exclusively in cash. Those in favor will also highlight the aforementioned terror financing angle. So far at least, none of these nefarious industries take credit cards – or EBT – yet.

This all sounds rather great – does it not? Yes it does, until we consider the downside, which is frightening. But the sales pitch, like other great ideas such as Obamacare, will be reasonable, “common sense” measures, suggested by the government to get us to buy in to this latest nightmare.

Like Obamacare, which seeks to control the public by holding its need for healthcare hostage, so too will a cashless economy, by holding our finances hostage. The proposal of a cashless society is another means of centralized government command and control – nothing more. It’s the perfect remedy to a free society.

President Bill Clinton summed up the real reason for a cashless society in 1999, when he said, regarding not giving the “surplus” back to the people: “We could give it all back to you and hope you spend it right… But … if you don’t spend it right, here’s what’s going to happen.”

Leftist community planners and Agenda 21 advocates will hail the cashless plan as people will have to begin migrating closer to cities, due to connectivity required for going completely cashless.

The banks will more easily remain “in-the-black” as government has already given them authority to recoup losses by means of a bail-in. A “bail-in” is similar to a bail-out, except that instead of banks taking money from the government (taxpayers), they will merely withdrawal a certain percentage from everyone’s bank account.

The days of personal financial transactions will go the way of the Dodo. Everything must have traceability. No longer will one be able to have a simple yard sale, lemonade stand or sell their vehicle with a simple yard sign.

The government will have full traceability of everyone’s money and every transaction – where and when we spend, and for what. As Bill alluded to, Government can monitor transactions to be sure we are spending our money wisely, and eventually take action to curb our “wrong” behavior.

And of course, just like what happened during the idiotic Prohibition experiment, passed in 1918, whole black market industries will crop up. An entire shadow-economy will be created in an attempt to thwart the over-reach, intrusion and control by the federal government.

It will be great. I can’t wait!