A Case for the Necessary Rise of Third Parties 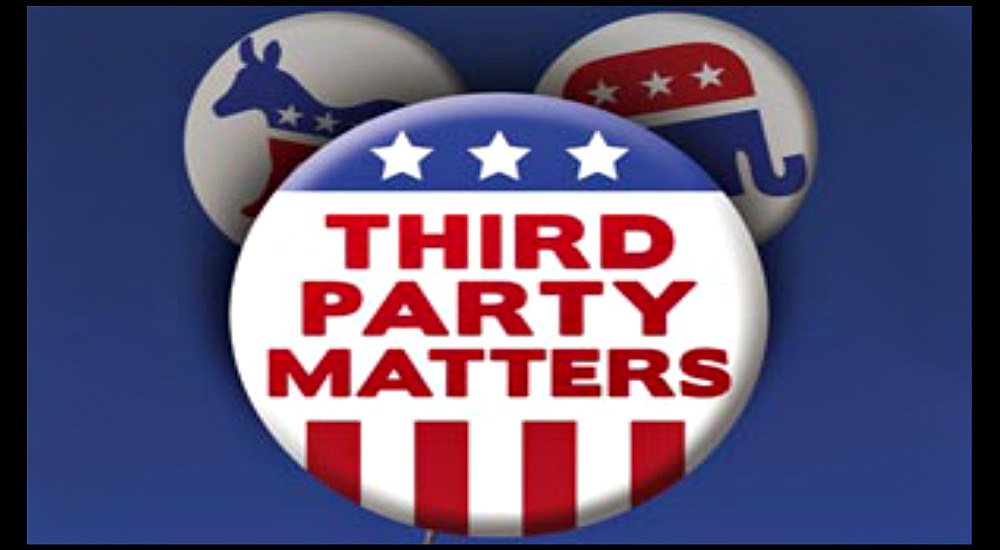 It’s contrary to my DNA to look to France as a model to examine from a political perspective. Following this weekend’s stunning round one results that yielded two finalists who were not in mainstream parties, it’s fair to say I’m more interested in French politics now than I’ve ever been in my life.

For complete transparency, I’m a former Republican who now aligns with the Federalist Party. Even if I were in the Libertarian, Constitution, or any other third party, I’d still be very watchful of what took place in Europe. I don’t think it’s a prototype of any sort for America since their system isn’t nearly as tilted as ours is towards maintaining supremacy for the Democratic-Republican super-party, but the wave of anti-Establishment sentiment that seems to be sweeping the world must be examined.

Some will say that I only need to look at what happened here in November to see the wave in full force, but I’m a firm believer that President Trump’s victory was a false-positive that didn’t fulfill the desire to oppose the Establishment. Yes, he ran on anti-Establishment rhetoric, but I have to believe a large minority of Americans didn’t really believe he was against the Establishment. “Drain the Swamp” was a great slogan, but we haven’t seen much that Jeb Bush or John Kasich wouldn’t have done if they had won. In fact, reports that the President has threatened multiple members of his party who are the furthest away from being part of the GOP Establishment are clear indicators he’s more aligned with Mitch McConnell and Paul Ryan than he is with Rand Paul and Mark Meadows.

So, what did we learn from France’s anti-Establishment election? It’s time for Americans to align with their true philosophies rather than pick between the big government Republicans or bigger government Democrats.

We know the Democrats are in complete disarray. Sure, they’re putting on a happy mask of unity by channeling their frustration towards President Trump, but at the end of the day they know it’s not enough to oppose one man. The Republicans, with help from the Tea Party, were unable to translate frustration into a victory in 2012, but they latched onto the idea of opposing Obamacare to bring them victories in Congress that yielded majorities at opportune times.

We also know the Republicans are shifting. Party leadership has been hoping for an excuse to drift towards the middle since Ronald Reagan left office and President Trump empowers them to do so. On some issues, it’s like watching “1984” unfold before our eyes. For example, before Trump, the GOP staunchly supported free trade. Now, the majority in the GOP believes in fair trade, and just like in “1984” we are being told that they’ve always supported fair trade. Any attempts to remind them of their recent past will result in calls to send you to a reconditioning center.

With those problems within the two parties understood, small-government-loving Republicans are faced with two choices: fall in line with the “new and improved” budget-bloating GOP, or look to a third party. Pro-life Democrats are now faced with a similar set of choices: accept that their opinions on abortion are not appreciated or even wanted by their party, or look to a third party.

Here’s the problem. To turn to a third-party requires a suspension of disbelief. We’re Americans. We like to win. It’s been embedded in us through decades of indoctrination that there is no way to break from from the Democratic-Republican stranglehold on government. Some would agree with the perspective that 2016 presented America with the worst combination of major-party candidates we’ve ever seen, yet the third parties weren’t able to win a single electoral college vote. Faith Spotted Eagle received an electoral college vote, but the third parties couldn’t get one.

It’s time for something new. When it became clear I wasn’t going to have a major-party candidate I could support for President, I did extensive research into the various third parties. After examining and speaking with leaders in both the Libertarian Party and Constitution Party, I realized they had some good ideas but such horrible campaign strategies that I couldn’t imagine them ever getting their act together without extreme overhauls at the top. I looked to even smaller parties like America’s Party and found essentially the same problems, though less pronounced because they didn’t even have the burdens of size and diversity. After talking to many respected pundits and former politicians, I came to the conclusion we needed to build from scratch.

The prospects were daunting, but there were a few things that gave me hope. First, the angst that was rising in both parties seemed to make the timing as good as it’s been since the 19th century. Second, we knew we if we did what other third parties neglected – focus on local elections out of the gate – we could build groundswells of support that could quickly turn into national election victories in subsequent elections. Third, having a strong technology and PR infrastructure would give us the ability to grow with viral velocity and compounding passions feeding off themselves. In other words, we saw social media, mobile technology (text FEDERALIST to 53445 for updates), and the rise of citizen journalism as keys to our early success. Last week alone, we appeared on four podcasts and a couple of radio shows. They weren’t Rush Limbaugh, but they’re reaching people. It’s a start.

It’s important to understand that leadership in both parties want to lurch further to the left. The Democrats want to be as far to the left as allowable by their constituents. The Republicans want to drift towards the middle because they know that right-wing voters will never vote Democrat. While both strategies seem cogent, they leave a gigantic hole on the right and a smaller hole on the moderate left. This, more than anything else, is why a third party with the right strategies can succeed just as anti-Establishment candidates are succeeding around the world.

On the right, we have the obvious hole of Constitutional conservatives who are learning with every election that the GOP wants their votes but doesn’t want to hear their perspectives. Yes, there were strides made through the Tea Party, but now we have a President threatening to primary conservatives in office with Mitch and Paul giddily standing behind him. The days of conservative Republicans in Congress are numbered.

On the moderate left, we have social conservatives who would never vote Republican but who are unhappy with the Democrats. There are many more of them than most would expect, particularly with minority voters who have strong faith and family values but who believe the GOP has no place for them.

Between these two groups and one other (millennials, but I’ll discuss them with their own article in the near future), we believe we have the formula to achieve in a year or two what other third parties have failed to do for decades: win elections. We’ll start with races that are easier but still extremely important: city councils, mayors, state legislators, even US Congressional seats. We’ll only enter races we believe we have a serious chance of winning. While nearly every third party puts that majority of their eggs into their Presidential candidates’ baskets, we will only put resources towards achieving realistic goals. No protest votes. No spoilers. We’ll have a chance of winning every race we enter. If we have no chance in a race, we simply won’t run in it. We’re not here to waste anyone’s money or our own resources in an attempt to make a statement. We want to make an impact.

America deserves real choices. The illusion of the binary choice is perpetuated by those who benefit from it. Every day we’re seeing more Americans wake up to the fact that they can have multiple choices if enough voters are willing to suspend their disbelief. It won’t be easy, but it will be done.