You Can’t Always Get What You Want – Especially this Election 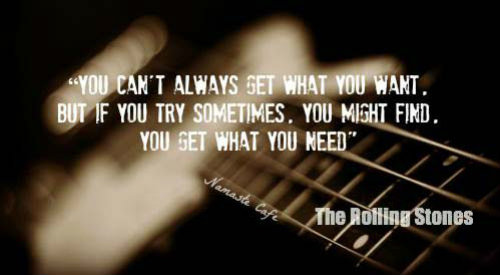 Ever have one of those days, or perhaps a lifetime of hearing a song without listening to it? Only to discover a light, cheerful melody is underwhelmed with lyrics unfit for primetime; nor appropriate for the sensitive ears of a truck driver? Or only to realize a high pitched Rolling Stones tune selected by Donald Trump needs an interpreter? Thanks to Joel Pollack of Breitbart notoriety the song closing out nearly every single Trump rally has been revealed to be the theme, the headline, the rhythm enshrouded essence of his entire campaign. The chorus includes these lines:

Pollack pointed out the disappointment some conservatives and establishment Republicans share; Trump is not their first choice, but he might be who they need. Pollack likewise made it clear liberals do not want Trump for a variety of PC and personal “snowflake” reasons. If he wins they will not get what they want, but Trump might be who they need. Regarding the Democratic Party we should go there: Will any Democrat anywhere, in any time step up to the plate to rout out the culture of corruption exemplified by the collusion of the Clintons, Obama, and media? Will any Democrat leader show up to return their party’s faithful to the American column of voters who are offended when a candidate to high office employs unethical and illegal means to attain high office? Not likely. Though he is not who they want, Democrats need Trump to whip them into shape to at least make them look like they are Americans again. Perhaps their rank and file will thank him later.

Peter Thiel, co-founder of PayPal, last Monday morning reduced Trump’s massive point laden program of making America great again down to its most basic form: “A return to normalcy.” He posited a return to normalcy is Trump’s unique out of the box alternative to the silly alternatives the Left and Right fruitlessly have been keeping us busy with for decades: the Left perennially demanding we do more with more, the Right contrarily demanding we do less with less. Trump’s solution: Do more with less. In this regard Thiel made an example of the long plagued F-35 fighter jet; so technologically advanced it dares not fight in the rain. He asked why we can’t put less technological cost into our newest fighters so they can do more to win battles the nation needs them for. He advanced education and infrastructure spending as other examples of the need to do more with less. Finally, most significantly, Thiel expressed his admiration for Trump’s courageous, relentless, unapologetic pursuit of “a scorched earth, whatever it takes” campaign approach that no other Republican candidate was willing this season to engage in.

Later the same morning Rudy Giuliani walked onto the set of CNBC’s Squawk on the Street. He pointed to an irony or dichotomy of what a Clinton presidency will mean to the nation and the world. He mentioned how according to some polls Clinton is the choice of voters who want stable markets, who want to know what to expect in the coming years for the sake of our economy. Then he reminded his audience of Clinton’s and Obama’s policies and actions, a clear record across the globe of them making nations less stable. In particular he spoke of how America and her allies won in Iraq, how Obama and his Secretary of State helped destabilize Assad of Syria, how they opened the way for ISIS to spread from Syria into Iraq by withdrawing all our troops out of Iraq, how as a consequence ISIS has spread into thirty-two countries, and how the resultant Great Migration of fleeing innocents and their accompanying terrorists in tow has spread across Europe, into the United States and other allied countries around the globe.

By contrast Giuliani said the same voters think of Donald Trump as an unknown quantity that wants to put our economy at risk and chomps at the bit of making the world less stable, even though Trump has no association whatsoever with the policies and actions that have in fact made so many nations less secure in their economies and less safe in their persons, including our own country and citizens. Trump has not stretched our military thin while depleting its effectiveness. Meanwhile Obama and Clinton have us engaged right now in five simultaneous undeclared wars in: Iraq, Afghanistan, Pakistan, Somalia, and Yemen. Trump has not deployed our military trainers and Special Forces (SOF’s) into 135 countries. Obama has. According to Ken McGraw, a spokesman for SOCOM (Special Operations Command), President Obama is engaging those men and women in eighty to ninety countries every single day.

And the Daisy ads are run against Trump? The same ads and talking points Democrats have run in one form or another against almost all Republican candidates beginning with Goldwater. They note Trump once argued, “Why shouldn’t we use nuclear weapons?” He is right on principle if he argues that position as Commander in Chief. He is also right about that on principle if he argues much the same during a business negotiation, “All legal and ethical options are on the table.” The truth of the matter is President Obama rarely if ever follows the military recommendations of his generals and admirals, who realistically might need nuclear arms as a deterrent or as actual weapons to deploy in a future situation. Trump has no such record of arrogance toward the military as Obama and Clinton have demonstrated. Trump’s record is one of following through on the advice of those he consults with in and around his chosen profession of property development.

Outside of his profession in the realm of politics is where opponents on left and right take issue with his willingness to heed the advice of those he consults with. Need there be any hesitation to provide as an example of this discrepancy his present day “scorched earth, whatever it takes” campaign for the presidency of the United States of America? His defense or excuse? His uncommon instincts and common sense. To his credit, if his instincts and common sense had not been sufficient to the task, he either would not be in the position of snatching a win on Tuesday; or he would be in this position today because he had reversed his self and decided it was best for him to accept the advice of his political advisors.

Let’s consider the alternative, a President and Secretary of State who have never learned, despite failure after failure and regardless their endless sorties of lies made necessary to hide all their previous lies. In fact they boast to the world their pageants of failures are successes; and their shameless cover-ups are indicators of the bravery and courage all Americans should value, share, and emulate. They honor Gruber and the philandering Kennedys, yet are ashamed of Washington and Jefferson.

A return to normalcy is the Yugest challenge we face on Tuesday. Those under Natural Law, those who accept the idea God or Nature made the world good enough for us will answer the challenge differently than Utopians who design to coerce perfection out of us. That is a true distinction between Trump’s and Clinton’s sides. The perfect Constitutionalist presidential candidate might be what #NeverTrumpers want. As Thiel noted, normalcy, more with less, and a scorched earth passion to defeat Hillary Clinton is what Republicans need. Elizabeth Warren or Bernie Sanders might be the candidate Democrats now want after thirty-two (will there be more?) Wikileak dumps, but a return to morality, legality, and the American way is what Democrats need.

The markets might want the stability Clinton’s highly regulated and taxed economy portends, but the sovereignty of a nation and its individuals to act in their own self interests is what Americans need to Make America Great Again.