Can a Lone Heroine Save France from Islam? 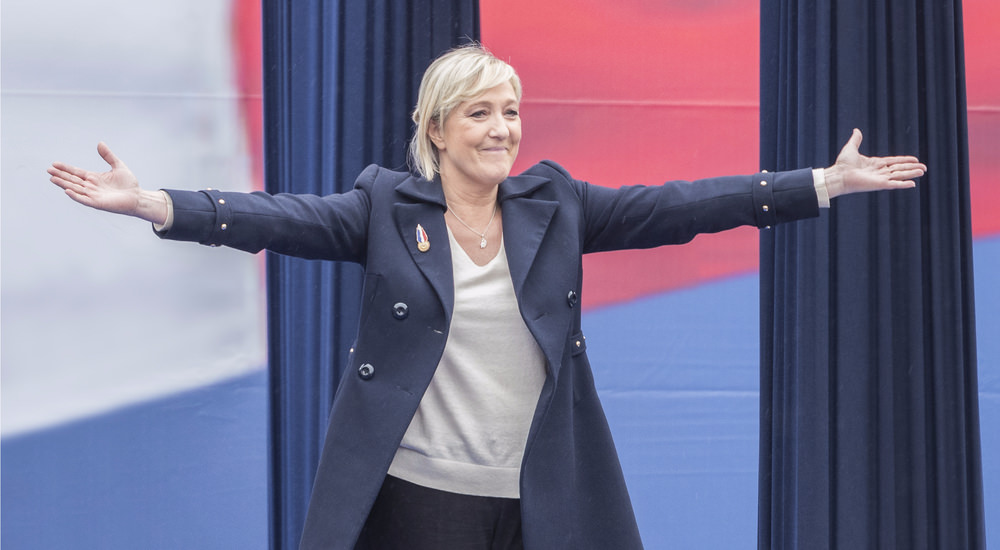 Can a lone “Marine” save France?

Four times in history the Arab world has tried to invade and conquer Europe.

The first was in 490 BC when king Darius of Persia (today’s Iran) attempted to invade Europe through Greece.  His invading army was defeated by the Athenians at the battle Marathon.  (And a messenger, Pheidipppides, ran 26 miles to bring news of the stunning, desperate victory to Athens.)

Darius’ successor, Xerxes, again attempted the conquest of Greece, in 480 BC, with an even larger force.  His million-man-plus army was unavoidably detained at a narrow place called Thermopylae by a force anchored by 300 Spartans under King Leonidas

After repeatedly getting their butts kicked by the Spartans, treason enabled the Persians to get behind the Spartan lines.  Most of the Greek forces withdrew, but the Spartans refused to leave the pass.  They fought to the last man.  Within months Xerxes’ remaining forces had been defeated, and the Spartans and Thermopylae became legend.

All was more-or-less quite on the eastern front for a thousand years (not counting that strange episode in Jerusalem).  And then, in the year 610 AD a self-proclaimed prophet named Muhammad, co-opting an ancient Moon god named Allah, got a new religion, Islam, rolling.  In the next 140 years it rolled over Christianity in Asia Minor, the Middle East, North Africa, Spain and into France.

The Muslim invaders were finally stopped and turned back by the Frankish Prince Charles Martel at the battle of Tours in 732.  Yet it was not until 1492 that the Muslims were finally driven completely from Spain.  [And now you know why the Spanish Inquisition was such a hellish affair; they had had seven centuries to learn from Islam the proper treatment of infidels.]

Lastly, in 1683, the Ottoman Empire, that had ruled the Islamic world for centuries, laid siege to Vienna, in a drive into Europe.  This time Islam was thwarted by Christian King Jan III Sobieski of Poland.  The date of King Sobieski’s arrival at the siege of Vienna was September 11, 1683; as in 9-11; showing that Islam knows how to carry a grudge at least as well as did the Christian crusaders when they attempted to retake the Holy Land.

Fast forward to today.  As iPatriot readers well know, Western Europe, especially Germany, Sweden and France are today being invaded – with rising murder, rape and pillage in various places – by Muslims.  There are hundreds of Muslim de-facto-conquered no-go zones.

This is no small matter.  It is world history in the making.  Europe is going down.  After 2,500 years the Eastern alien is finally within the gates of the West.  Those Europeans who do not know, or refuse to know, the meaning of this will likely learn the meaning with their lives.

It is tempting to hark back to the historical victories over numerically superior Arab/Muslim forces of the past as a rallying cry to repel today’s invasion.  But there is a difference today.

Today the leaders of Germany, Sweden, France and others have invited the invaders in, and are using the power of the State against resistors. How horrible it must be for European citizens to have their leaders deliver them unarmed into the hands of a population with a contingent of savage barbarians.

Pope Francis has allied with the enemy.  Spiritually, Europe is left trying to defeat something with nothing.

And yet a spark of the West remains in the French presidential candidacy of Marine Le Pen; the lone Marine.  (Actually not quite alone: she is currently the number-one polling candidate, and there are other voices.)

She understands what is at stake.

“What is at stake in this election is the continuity of France as a free nation, our existence as a people.”   -Marie Le Pen, 2/4/17

She has spoken not only against the betrayal of France to Islam; but against the NWO that is using Muslim immigrants as shock troops to terrorize, demoralize and destroy the nations of Western Europe.  (The same strategy Obama was attempting to employ against America.)

As I write this, the European Parliament has stripped Le Pen of diplomatic immunity (not for the first time) that comes with her membership in the EU Parliament, over tweeted pictures of beheadings committed by ISIS.  In France today it is illegal to distribute violent images.

“…it is beyond question that their violent nature is likely to undermine human dignity” the EU Parliament said of Le Pen’s tweets.   (They’re more worried about pictures than beheadings!  These creeps are jerks.)  But, judging by past oratory, the French government may regret having her speak in open court.

Yet I fear that France and Western Europe in general have little left to save themselves with.  The 20-th century has left them enervated; morally, spiritually, intellectually; military power alone will not suffice.

The recent history of France is not encouraging.  They surrendered pitifully to the Nazis in WWII.  During the Cold War there was a saying that the French were willing to fight the Russians to the last American.  Their current traitorous leaders are elected leaders.  And Le Pen’s philosophical underpinning against Islam is pure secularism; again trying to beat something with nothing.  She seems not to realize that it is secularism that got them into this mess to start with.

On top of all this, France, though less than the rest of Europe, is sitting on a demographic time bomb.

For a population to survive long term it must have a net reproduction rate (NPR), or female fertility rate, of about 2.1; 2 births to replace each man and woman, and .1 to cover mishaps.

France has the highest NPR in Europe; currently 2.01.  This is a little below the rate required to maintain the population, but in terms of France remaining traditional France, it is a misleading statistic.  While it is difficult to get exact statistics, the NPR of European ancestry France is currently estimated to be about 1.7.  The 2.01 average comes from the immigrant, mostly Muslim, population NPR of about 3.25.  The population with French ancestry is dwindling; the population with non-French ancestry is increasing rapidly.

Add to this prospective Muslim immigration, and the European French will soon be a minority.  In short, they’re running out of time.  Marine Le Pen is probably their last chance slow this process.  Her victory will give France as we know it at least an Indian summer before the Muslim winter sets in; a winter of Sharia law, and French nukes in the hands of Islam.

The Sword of Islam is raised over Europe.

Will Le Pen prove mightier than the Sword?