Can We believe the Bible? 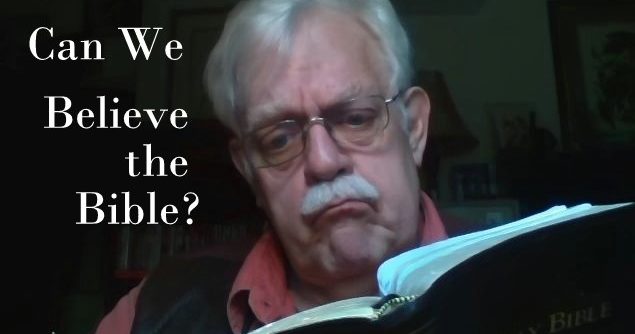 Can we believe the Bible?

Recently I read an article in our local paper about the area of Germany where Martin Luther lived and preached. That area had been in East Germany and the Communist Government which controlled it for many years had drummed Christianity and the church out of people’s lives.  They taught them that to believe in God was foolish and only for the weak minded.

The only time most people attend a church service these days is on Christmas and that is only because of tradition.  It’s just something they do. They don’t believe the Bible, or believe Jesus.

How sad, that people who grew up in the part of the world where the Reformation started and yet have no idea what it was all about.

The article went on to say, that the Pastors can’t preach about Jesus coming into the world to save sinners, because the people wouldn’t understand what sin is and why they need a savior.  So they just preach love and being kind to one another and how we should take care of people in need. All well and good, but without a foundation, what’s the point?

We need a foundation that we can believe in.

I titled this piece, “Can we believe the Bible?”

Many hundreds of years ago there was a conference held to try to prove that the Bible was true. One man got up and said something that stunned the whole assembly of very learned men.  He said, “I can prove the Bible is true with just two words.” The room was silent, and then the man said, “The Jews.”

He went on to explain that never in human history have a conquered and scattered people been able to keep their national identity for more than a couple of generations, but the Jews have kept theirs. And that the Bible predicted that the Jews would be scattered throughout the world.

I would now have to add to that man’s argument, that the Bible also predicted that God would bring those people back to their land and establish them in it. That happened in 1948 when with the stroke of a pen, Israel was reborn as a nation.

Some of you might be thinking, “He’s just made up that story of the man and that conference.”

I didn’t, but what if I did, it still doesn’t negate the truth of the statement, proving the Bible true by what has happened to the Jews.

Can we truly believe the Bible?

I say we can because of everything that has happened that was predicted in it. About a third of the Bible is prophecy and most of those prophecies have come true. Not just those about Jesus, because people who think the Bible is foolishness, don’t believe Jesus either. No, there are many other prophecies in the Bible that have come to pass. The Bible predicted the rise of Alexander the Great and the empires that would follow Babylon as well. If you read it closely with an eye to history, you can find many people and events predicted in its pages.

As for Jesus, there are over 300 specific prophecies in the Old Testament that speak of Him, His birth, life, death and resurrection.  The book of Daniel for example predicted the exact day that Jesus would enter Jerusalem on that donkey, hundreds of years before it happened.

There are many books that have been written by more learned people then I which cover the truth of the Bible, a favorite of mine is “I don’t have enough faith to be an atheist” by Norman Geisler and Frank Turek. I suggest that you buy it and study it.

Aside from all the prophetic consistencies, the fact that most of the Old Testament and ALL of the New Testament were written by eye witnesses of the events should make you think.

Do you want more proof that the Bible is to be believed?

Believe it because of the effects that one book as had on the world.

And not just the world, but on the individual lives that have been touched by it.

Paul, who was a persecutor of the early Christians, was changed into one who would go on to write much of the New Testament after his conversion on the road to Damascus.

Sadly today there are those in this world who discount even these proofs as fairy tales for children.

But how do they explain a carpenter from a tiny village in a small country on the eastern end of the Mediterranean Sea that came to change the world? A man who never won a battle or conquered a city or ruled a kingdom, at least not yet, but that man still had an effect far beyond the few square miles He covered when He was on this earth.

How can the non-believer, the doubter, come to terms with all the countless changed lives of men and women who have had an encounter with Jesus and given their lives to Him, only to have Him change their lives completely.

There have been and are continuing to be countless stories of people’s lives that have been changed because of Jesus.  Some of those stories are about people who started out to disprove the Bible and the New Testament accounts of that Man from Nazareth whom we call Jesus, the Christ. One such man is Lee Stroble, his first book; “The Case for Christ” is his investigation into the life, death and resurrection of Jesus Christ. He was an atheist when he started, and now he is a true believer and follower of Jesus. His life has never been the same.

My own life is not quite that dramatic, but when Jesus really came into my life, He changed me so completely that I have to say that I was “Born Again.” I am not the man I was before Jesus took hold of my life, nor would I want to be that man again.

Can we say the Bible is true?

Can we believe the Bible?

I say yes, if only for the changed lives that it has brought about through its teaching and through the testimonies of those who have come before us.

The Bible has changed the world and changed lives.

Those people in Germany who don’t really know who Jesus was and why He came into the world and any of those who are of a similar mind would do themselves a favor if they just opened their minds to Him. Jesus is willing to reveal Himself to anyone who wants to find Him.

So I say to you, if you don’t know Jesus as Lord and Savior, then open your heart to Him and ask Him to reveal Himself to you. Ask Him into your heart and He will come in and dine with you.

We all have sinned, which is to say, we all have missed the mark and we need someone to forgive us and save us. That is why Jesus came and that is why we need Him.

Go ahead, I dare you, ask Jesus to come into your life and change it.

I dare you to do it.

Once you do, you’ll find that you can believe the Bible.