Can America Endure its Snowflakes, Demons and Democrats? 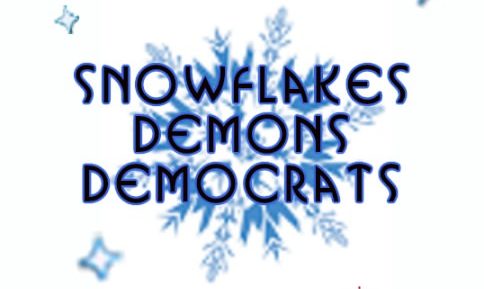 Not only was conservative speaker Ann Coulter forced out of her speaking engagement at University of California-Berkeley, but following the riots there, a student senator told the school paper that the continued presence of the police on campus was “re-traumatizing” students on campus.

To think of it! These brave hearts, whose mothers managed to pass by the abortion mills without responding to the Sanger-ian call to abort, and then clumsily diddling through high school, now are offended with cops on campus. The sheer horror of peace officers in the midst!

Should we call on those like Chuck Schumer and his cadre of disillusioned dems to rally the congress to draft a bill to deal with the new pseudo-adult child abuse? Should we call for Greenpeace to bring in seedlings so the darlings can plant trees to quell their frayed nerves? Finally, why are we not engaging GoFundMe to raise bucks for hundreds of fresh teddy bears, puppies and popsicles?

The south’s long respected Clemson University is now offering courses that claim that expecting people to show up on time is racist. It is part of political correctness tripe being taught under the guise of diversity training.

It seems that perversity and diversity are doing a mind meld in our most prestigious schools and the snowflakes attending these academic swamps are paying top dollar to attend classes of this kind.

They are dilettantes taught of college professors, their saviors, who don’t die for their sins, but rather, teach them to take pride in their perversions and transgressions.

They are taught that their phylogenies are apes and their progeny are grapes if they truly believe it in their minds. Men can be women and the women can fancy themselves as men if only they believe.

They seek safe places where harsh truths will not offend and differing viewpoints will not intrude. They are not the children of Washington and Jefferson, but they will accept the fruit of both of their labors and the sacrifices they have made to fund their parsimonious version of the great American dream.

They are the new builders and masters of modernity’s tower of Babel, they are fully succeeding and approaching the top, all at the same time, but no one is taking note that the tower is – crumbling at the base.

No, America cannot endure the snowflakes.

Armies of atheists, college instructors, Godless politicians and left leaning loonies are screaming foul over prayers in public, “In God We Trust” on our money and any reference to God at all, in all places where they may chance to see or hear it.

It is hard not to join those who have concluded that it is the last days promised outpouring of demons issued from the pits of hell to prepare a dying world for its satanically induced final benediction.

The cry is “leave us alone” don’t attempt to analyze or criticize our choices, much less condemn them. It is an ancient and familiar cry of all demons, but now it is pervasive, pandemic and a product of today’s social pathology. To wit:

“And in the synagogue there was a man, which had a spirit of an unclean devil, and cried out with a loud voice, Saying, Let us alone; what have we to do with thee, thou Jesus of Nazareth? art thou come to destroy us? I know thee who thou art; the Holy One of God.” (Luke 4: 33-34)

No, America cannot endure its demons.

The next crowd of wailing discontents wallowing in unbelief that their champion, Hillary Clinton, lost to the Republicans is the Democrats, from the top down.

Unable to enjoy the great strides our new President has been making to restore the nation to some semblance of sanity and security, they choose to mock, dignities (Jude 1: 8) and disgrace themselves with resistance that makes a child’s temper tantrum look like a day in Sunday school.

They are hurting America, by hating Mr. Trump, but they could care less. They have betrayed their calling and their nation on both a political and philosophical level.

They support immigrants that are felons and felons who are murderers rolling in an out of the nation through the revolving door called the Mexican border.

Their pro-choice champions are also murderers who obfuscate the beginning of life in spite of scientific proof to the contrary and the product is the bloody genocide of 60 million human beings since 1973.

They hide behind the rights of gays and transgenders who would risk the innocence of an entire generation of youth who are told that sexuality is a broad spectrum of personal choice. Every child that enters this confusion will be added to their list of wasted lives and they will surely be held accountable for them in the coming day, when the Lord returns to judge everyone.

No, America cannot endure its Democrats.

It is here that we can only conclude that progressivism has matured in its false assumption that between high tech and the new social pathology of the day, the world is about to break through to its utopia. All diseases will be vanquished, war will be obsolete and social differences will all be rendered innocuous by assimilation into the “new world order.”

It’s magic for the progressives, but it’s prophetic for the messengers of God.

Europe and the rest of the world are shaping up to fulfill every last iota of the prophetic message which fills over one third of that book they so disdain that we call the Bible. While they don’t give a wit about what it has to say, as we approach the promised days the messengers are increased and more vociferous than ever before. The soft chimes of warning have now reached a siren pitch.

The message has never changed; the nations will rise with great pomp and fury to welcome their last dictator known as – the antichrist, the embodiment of evil in a single man. To the world he will be a hero, unparalleled in knowledge, appearance, and political and economic savvy. He is a satanic shill, the great Elmer Gantry of the progressives, the catalyst for the fulfillment of their warped dream.

Nations will walk headlong to the great battle of Armageddon, but not before they see a great economic collapse that will shake the world to its core and America will not escape.

There is little doubt that President Trump will do all he can to keep our nation strong, but if the demons, democrats, dilettantes and snowflakes have their way we will not avoid the prophetic fulfillment of disaster.