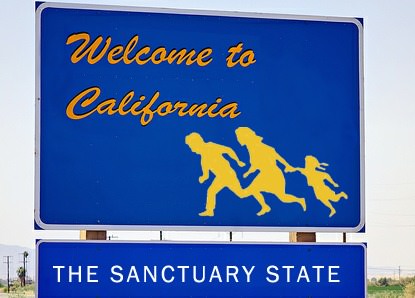 The framers recognized this by convincing thirteen diverse and independent republics that they could coexist within a cohesive, but strictly limited federation; thereby creating an alliance with a single national identity. Hence the name united STATES of america.

Given that underlying political reality, I cannot imagine why a conservative would oppose the Californication of our western border. If California wants to become a socialist state, how does that damage Texas? If California opens its borders to illegal immigrants, feeds them, houses them, educates them, cares for them, suffers the ill effects and reaps the rewards, why does Pennsylvania care? If Hawaii wants to tax it’s citizens and visitors into oblivion to build a piss-ant elevated train to carry a few people back and forth to the mall, how does that impact Alaska?

It goes without saying that there are enormous implications involved in reverting to PURE states rights. What would an avocado cost, after all? Consider California’s defense of its own borders… without the U.S. Military. Presumably, if it want’s a European-style open border policy, it will be forced to police these open borders. Perhaps it would lease out specific areas to the U.S. Government for national security and will, in turn, pay the U.S. Government for protecting its western border from invasion. Absent some form of mutually beneficial agreement, the U.S. Government could simply pull back its forces, secure it’s revised western border and let California do whatever it wanted.

Perhaps La Raza would wake up one morning and realize it can peacefully invade California and turn it into the northern-most Mexican state. So what? Perhaps Oregon, Washington, Nevada, and New Mexico would follow suit, so what? If the entire western seaboard were to become socialist states, so what? Perhaps New York, Massachusetts, Delaware, Rhode Island, etc, etc. would follow suit. They would all become in varying degrees, socialist states. Why would Tennessee care? Why would Texas care?

After a period of economic and social adjustment, the price of avocados might actually be lower. California’s PURCHASE of massive amounts of water from its nearby neighbors would spur economic growth in the new frontier states. California’s new-found reliance on its own border security would generate tremendous wealth redistribution, speeding the conversion to a bi-polar, celebrity-centric, socialist elite, monolith supported by a homogeneous society of lower-middle-class worker bees.

More worker bees would flood in to collect their freebies, more industry would flood out to avoid paying for them, and the California coalition would become the American version of Scandinavia. The new border frontier states would probably become more like Australia and less like France.

This differs from secession in that they would still be one of the (currently) 50 states, but they would assume the responsibility for protecting (or not) their own borders and managing their own social progression (or digression). Who cares? Valid U.S. Citizens would still be free to travel and relocate to and from Calexico. Those without U.S. citizenship would be restricted from traveling outside their ‘sanctuary’ and life would go on. We’d negotiate to buy avocados and they’d negotiate to buy water. They’d build desalination plants that would suddenly become economically feasible because Idaho raised the water rates. Without shipping all their water to California, deserts in western states could irrigate (like Oregon and California did) to become agricultural powerhouses.

Calexico would still assemble a few cars that sell for a couple hundred grand from parts they buy from Nevada, Detroit, and China. They’d still “import” millions of practical cars from Detroit, Asia, and Europe. Detroit would get on the Technocar bandwagon and lure Calexico’s brightest to a non-socialist state, and life would go on.

But the bottom line is, reign in the federal government, let California do what it wants and let every state do what it wants. We’d ALL be drenched in new-found liberty just as the founders intended. If we Purple Pandoranians suffer undue discrimination, we can rise up or move. I hear Calexico supplies free avocado smoothies at its free universities and Hawaii has an awesome $12 billion elevated rail that will soon connect dozens of homeless camps.